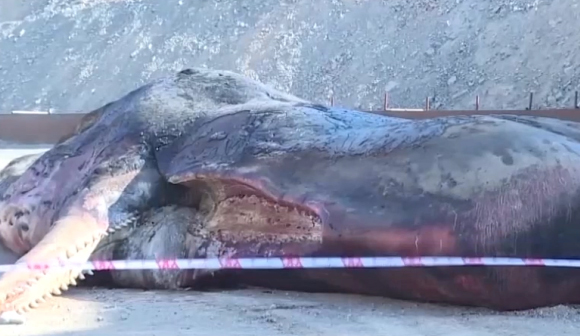 Identified by local marine biology experts, the stranded sperm whale is an adult male sperm whale, measuring 18 meters long and about 40 tons. Since this sperm whale had no obvious external wounds, it was difficult to determine the cause of its death. According to experts, the carcass of the whale must be disposed in time for environmental protection considerations as the decomposing carcass will pollute the waters.

Sui Hongjin, Director of the Department of Anatomy at Dalian Medical University, said that the carcass must be decomposed into several parts due to its large size before applying formaldehyde to stop the process. The fixing process will take about six months to a year.

The stranded sperm whale has been dissected, decomposed, and plasticized. Dalian City will later apply for collection permits to relevant state departments in accordance with regulations and procedures for wildlife protection in order to publicly display the specimen at the Dalian Natural History Museum to promote marine knowledge and culture.