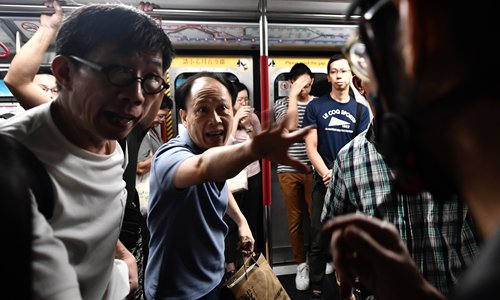 A passenger gestures toward a protester who prevented the doors of an MTR train from closing at Fortress Hill station during morning disruptions to the rush-hour commute in Hong Kong on Monday. (Photo: AFP)

Life in Hong Kong was severely jeopardized by the "three strikes" campaign which started on Monday, after protests raged across the city over the weekend in a violent manner.

Since protests broke out in June and severely escalated since July, the city has been plunged into chaos.

The police have arrested 420 people involved in unlawful assembly, attacking the police and riots since June 9, according to a police press conference on Monday afternoon.  Eighty-two people were arrested during Monday's strikes and protests.

Many Hong Kong residents reached by the Global Times said that the protests have seriously affected life and social order in Hong Kong and generated public resentment.

During the morning rush hour on Monday, protesters descended on key metro stations in the city, deliberately keeping doors ajar to prevent trains from departing.

A video the Global Times reporter obtained on Monday showed some angry residents beating the black-clad protesters at a station.

At Fortress Hill station, a pregnant woman did not feel well amid the delay, prompting her husband to harshly criticize the protesters who blocked the station's doors.

One group gathered outside Yoho Mall in Yuen Long was injured when a car tried to break through the roadblock, leading to fighting in the street.

A video showed activists throwing bicycles onto the tracks. Transport authorities warned such an action posed a serious safety threat.

Many residents found the strikes and protests disturbing and annoying.

Hung Wing Lok, 33, a resident who works in Tuen Mun district, told the Global Times Monday that "I knew those protesters are trying to interrupt public transportation so I left home early today, but unfortunately, the train was not going to operate, so I took a taxi which cost me more."

While he waited for the train, Hung said, "I saw a lot of elderly want to go out by subway and they had no choice today. On the way to my office, I heard many citizens complaining about those protesters since they have ruined the stability and harmony of the city."

When Hung arrived at his office, many colleagues were still on the way which he said was truly damaging to the efficiency of his company.

"This behavior of striking and blocking the roads is selfish and disgusting."

Ip Chee Hung, a taxi driver, told the Global Times that due to the strike initiated by the protesters and opposition groups, he and his colleagues were extremely busy.

"They (protesters) thought they are representing public opinion and justice, but they are not!'" Ip said. "They're using their own political goal to hijack the whole city and due to the fake news and biased media in Hong Kong that hijacks public opinion, the police are very restrained at law enforcement.

"This is wrong! They are killing this city!"

Why didn't "the silent majority" speak out?

"Because they are afraid!" Ip said. "The protesters will attack you and insult you if you disagree with them, and the media won't help you, and the police are too busy to take care of you."

All people could do, Ip said, was "just wait and see, and one day, the radical protesters and rioters will be punished. I believe that."

At the same time, groups of black-clad protesters came to occupy an exit of the Hong Kong airport, sitting on the floor and shouting slogans opposing the extradition bill and police bullying.

A Beijing-born college student studying in Canada said his parents who traveled with him were seriously disturbed by the protesters.

"They are cockroaches. When we stayed here these days, they disrupted public transport and scared people away," the student's mother told the Global Times.

"The investment of the second quarter has witnessed a double-digit fall, the worst in over a decade," Chan said during a press conference on Monday morning.

The conference was held by Hong Kong Chief Executive Carrie Lam Cheng Yuet-ngor as protesters were carrying out the city-wide strike.

"This is the time for us to rally together to set aside differences, bring back order and say 'no' to chaos and violence," Lam said.

Lam announced she would not be stepping down and warned that the city, which is now "full of bullying and maltreatment," was on the verge of a "very dangerous situation."

Lam said, "I don't think at this point resignation of myself or some of my colleagues will provide a better solution."

Emergency mechanisms were put in place to deal with the strikes, Lam said, adding that the Hong Kong government respects citizens' rights to express their demands, but protesters should also respect the rights of other uninvolved citizens.

The demands of protesters have changed from what they asked for at the beginning, Lam said at the press conference.

"Some even wantonly said they want to revive Hong Kong," Lam said. "This is destroying the lives of 7 million Hongkongers that we treasure. Under such circumstances, things will only turn worse if we indulge in them."

Some protesters simply want to get entangled in a life-and-death struggle and push Hong Kong to a dead end, said Lam, who asked demonstrators whether they were betting their stable lives and the future of Hong Kong.

The government of Hong Kong also held a press conference Monday afternoon. Secretary for Transport and Housing Frank Chan denounced violence as a means to express demands and urged Hong Kong society to drop off disputes and find a way out.

Former chief executive Tung Chee-hwa said Monday that a small group of rioters and their supporters were striving for the right to rule the special administrative region.

Signs of internal strife have emerged within opposition groups.

On Facebook, some blamed others for turning originally peaceful demonstrations into violence featuring secessionist elements, imperiling the efforts of regular protesters.

On Sunday night, a video showed a young man in a gray T-shirt asking violent protesters if they understood what public opinion meant and whether they listened to the opinion of peaceful demonstrators.

Hit on the head by an umbrella, he asked, "Why don't you voice your opinion?"

Both virtues of Hong Kong society - individual freedom and the protection of the rule of law - have been undermined, said Wang Jiangyu, an associate professor at the Faculty of Law of National University in Singapore.

Protesters do not share a consensus on violence, Wang believed. "The divergences among opposition groups, if real, suggest that the violent actions were conducted only by a few extremists and not agreed to by others," said Wang.

Divergences are not unusual between opposition groups, analysts said.

After a failed July 1 demonstration in the year of 2016, a number of radical groups pointed an accusing finger at each other which resulted in serious clashes.

Robert Chow Yung, spokesman for the conservative Alliance for Peace and Democracy and founder and leader of the Silent Majority for Hong Kong movement, told the Global Times that it was important Hong Kong police keep the situation under control.

"This is a battle of attrition. Gradually, the protesters who just participate as onlookers will not join and peace will return to Hong Kong," Chow said.