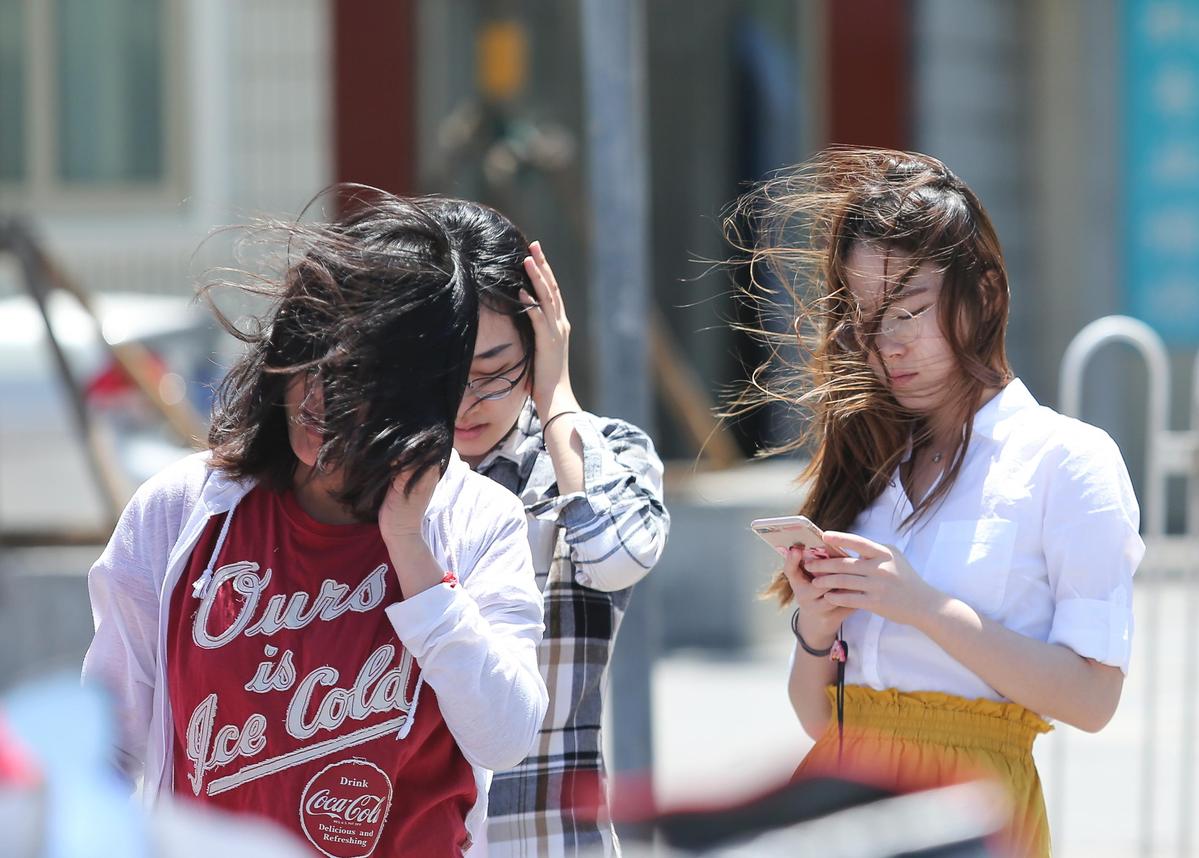 People in Beijing encounter strong winds on Monday, with the weather so far accounting for four fatalities in the city. (Photo: CHINA NEWS SERVICE)

The Beijing Education Commission canceled all outdoor activities on Monday for students in primary and secondary schools, kindergartens and vocational schools after strong winds led to four deaths in the capital.

The high winds caused three pedestrian fatalities after a wall toppled in a commercial area near Dongzhimen in downtown Beijing at around 4:40 pm Sunday, according to Dongcheng district's micro blog. Two died at the scene and one at a hospital.

A large tree was blown over in Xicheng district at about the same time and killed a deliveryman, Beijing Youth Daily reported.

Earlier on Sunday, the Beijing Meteorological Service issued a blue alert for heavy winds expected to hit the capital from 10 am Sunday until Monday evening. The meteorological service warned that some areas might face level 7 wind gusts. It also warned people of the danger of falling objects.

China has a four-color weather alert system, with red representing the most severe, followed by orange, yellow and blue.

The districts - Tongzhou, Yanqing, Changping, Huairou and Shunyi - were hit by strong winds of levels 8 to 9 and some areas reaching level 10 - from 88 to 102 kilometers per hour.

Zhao Wei, a chief forecaster with the meteorological service, said that due to the high temperatures in the capital over the past few days, atmospheric conditions were ripe for powerful gusts.

"It's common to see windy days in Beijing, especially during the transition from Spring to Summer," she said. "However, the strength this time is much more than expected."

By 6 pm Sunday, 51 out of 1,561 scheduled flights had been canceled at Beijing Capital International Airport, and two trains to the capital were delayed, according to transport authorities.

Li Zhaonan, a 27-year-old white-collar worker in Beijing, said he was frightened by the bumpy arrival of his flight to Beijing on Monday.

"My heart was in my mouth for about 20 minutes as the plane was tossed around," he said.

Some large trees downed by strong winds fell across railway lines from Chengde, Hebei province, to Beijing on Sunday afternoon. In Shunyi district, railway facilities were damaged and trains were delayed, the railway department said.

A parade at the Conference on Dialogue of Asian Civilizations in Beijing and an affiliated food festival were both canceled Monday afternoon due to the weather. A regular light show at the International Horticultural Exhibition in Yanqing district was also called off on Monday.