Stuck with scissors in skull, woman calmly takes one-hour bus to the hospital 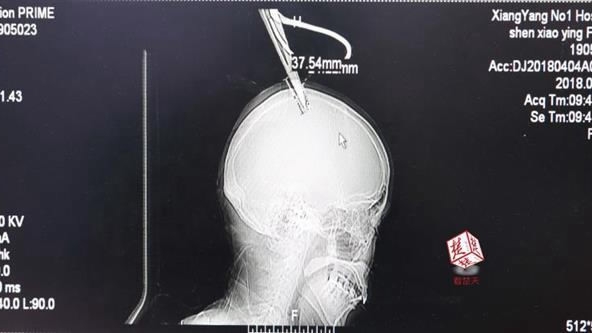 What would you do if you got scissors stuck in your skull? A 57-year-old village woman in central China’s Hubei Province showed extraordinary calmness when faced with the unusual situation.

The accident took place on Wednesday morning when the woman, Shen, tied up the scissors by a strip of cloth on a pole to pick up the tender leaves from a Chinese toon. The pole suddenly snapped sending the scissors plummeting down straight into her skull.

At home alone, Shen called her sister and sister-in-law to take her to the hospital in town. Despite facing such a frightening accident, Shen was calm and even chose to take the public transport to the hospital instead of calling an ambulance.

Shen had her head shaved and nurses dealt with her wound. (Photo: Chutian Daily)

“I was feeling okay at that time. I didn’t feel much pain in my head, just a little numb and dizzy on the bus,” Shen told Chutian Daily why she decided to take a bus to the hospital.

Upon arrival at the hospital, the doctor found the scissors had gone 3.75 centimeters deep into Shen’s skull and were only two to three millimeters away from her brains. Fortunately, the scissors were stuck in at a slight angle instead of vertical, which could have paralyzed her, according to Chutian Daily.

Later that day, Shen had an operation and the doctor successfully removed the scissors. She remained in ICU for further observation. 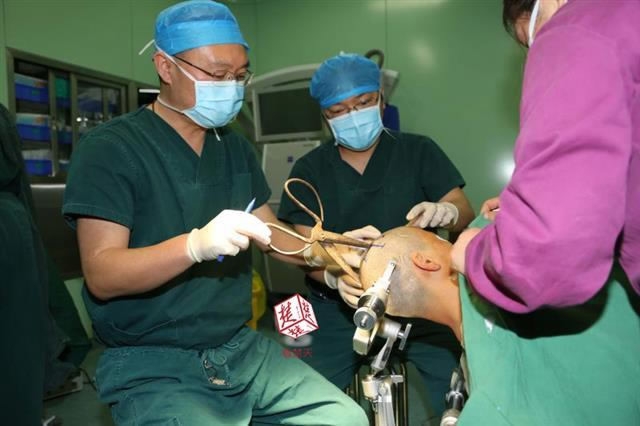 Doctors removed the scissors from Shen's skull during the operation. (Photo: Chutian Daily)

Shen’s calm response to the accident was reported by many news outlets on Chinese social media and shocked many netizens.

“I can’t believe she was not in panic when a scissor stuck into her head and even took a bus for an hour to the hospital! Such a brave woman,” commented by a user on China’s Twitter-like Weibo.

“She was so close to be paralyzed! Although she was safe and sound, it was still a risky way to handle such a dangerous situation and should be avoided,” commented by another user on Weibo.