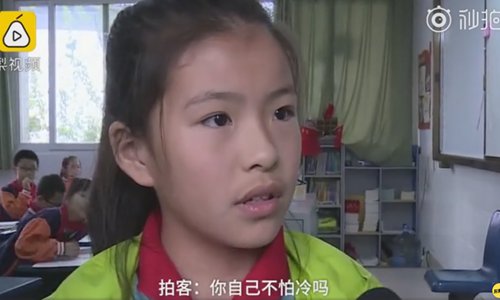 Xiang Wenjun, a 9-year-old girl who generously gave her school uniform to a new born baby who was given birth at the roadside in a rainy day, interviews with media at the classroom. (Photo: Screenshot from the Pear Video)

A 9-year-old girl has become a celebrity at her school and on social media after she gave the jacket of school uniform to cover a baby whose mother unexpectedly went into labor and gave birth on the sidewalk near the girl's school.

"There's no nearby hospital and I could see the situation was quite urgent so I just gave my jacket to help keep the baby warm," said Xiang Wenjun, the fourth-grade girl at a primary school in Southwest China's Chongqing in an interview in her classroom with Pear Video.

"We rushed to the spot and set up a temporary delivery room with sheets and umbrellas," He Li, a local police officer recalled after receiving a call that a pregnant woman was giving birth near parked cars on a wide sidewalk along a city street.

"The baby was shivering in his father's arms, when a little girl passed by and put her uniform jacket on the baby," said He.

The girl left the scene but was tracked down by police a few days later.

"I really appreciate the girl's kindness. It is really rare for a 9-year-old girl to behave like that," said the baby's mother.

"The girl is so lovely and she warmed the city during these cold days. She represents the future of our country," said a netizen on China's Twitter-like Sina Weibo.