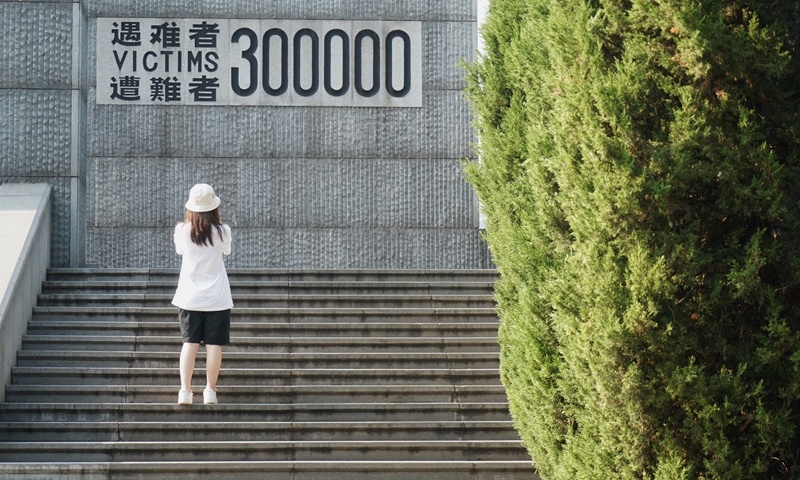 A woman visits the Memorial Hall of the Victims in Nanjing Massacre by Japanese Invaders in Nanjing, east China's Jiangsu Province, Aug 15, 2019. (Photo:Xinhua)

A student in Nanjing Normal University (NNU) of East China's Jiangsu Province drew wide criticism recently on China's social media platforms after using the Japanese "rising sun" flag, the ensign used by the imperial Japanese military until the end of WWII, in a cultural event held on the campus.

NNU said in a statement issued on Thursday night that the student had mistaken the "rising sun" flag with Japan's national flag.

The incident happened in an event exhibiting international culture at 9 am on November 14, in which the student was responsible for the Japan booth. To showcase Japanese culture, the student downloaded the picture of the "rising sun" flag as the Japanese national flag after searching for pictures of Japanese elements online and then decorated the booth with it, according to the NNU announcement.

The scene in which the booth was decorated with the flag was captured by some other students on the spot and uploaded online, causing heated discussion online, with many criticizing the student and the school for a lack of historical knowledge, especially in Nanjing, a city which was severely harmed by Japanese invaders, responsible for the Nanjing Massacre in 1937, during the War of Resistance against Japanese Aggression (1931-45).

The school noted that the student took down the pictures of the "rising sun" flags immediately after the event organizer found the problem around 10 am and made an online acknowledgment and apology.

However, the announcement only triggered a wider backlash, with many questioning it was not just a "mistake," criticizing the school of ignorance and negligence.

"It is a college student. Such education has been done as early as when we were in high school history class," a netizen Zhishijiuxililiang commented on China's Twitter-like Sina Weibo.

"Even a granny and a primary school student know what that flag means. The education level of the school and the teachers is worrying. It is so disappointing that no school faculty stood up to stop the incident," netizen JiangtongxueLeoJiang said.

Some people are showing understanding toward the student and appealing to strengthen education on history and patriotism.

"I I believe that the school and the student's mistakes were unintentional. The mistake has been made and what we should do is urge them to correct it," pipi91699 said.

The "rising sun" flag is considered a symbol of Japanese militarism and could trigger a backlash among patriotic individuals to the same degree as a Nazi flag does in Europe.

In 2014, an angry crowd assaulted a man for wearing a T-shirt emblazoned with the "rising sun" flag during a mountain climbing event in East China's Shandong Province. He was surrounded by the crowd and forcibly stripped off his shirt which also read "Imperial Japanese Navy," according to media reports.