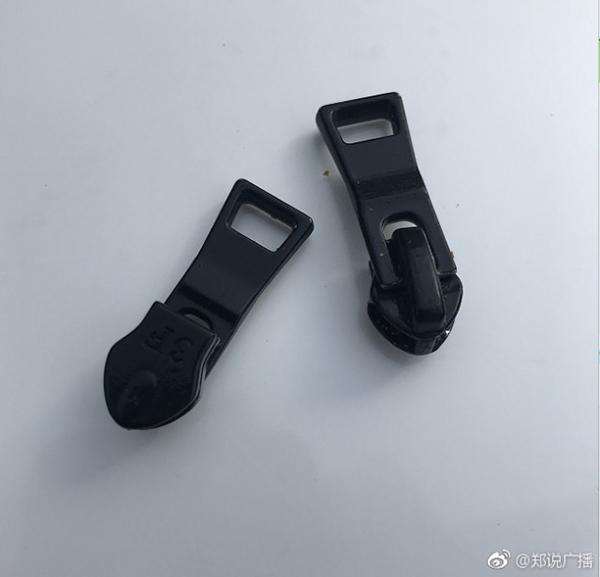 The sliders of a zipper removed from a student's clothes. (Photo: Weibo)

A Chinese test-taker learned the hard way that security measures in place to protect students and prevent cheating during the national college entrance exam are no joke, after a metal zipper almost barred him from taking the highly important test.

The unnamed student was banned from entering the premises of the 19th middle school in Zhengzhou City, central China’s Henan Province, where he was sitting gaokao because of a zipper attached to a clothing item.

Twenty minutes before the exam officially began on Thursday, the student was still struggling to change clothes with the help of a group of parents, according to Zhengzhou radio station.

The case reflects the great lengths authorities go to every year to ensure the safety of the millions of examinees and combat attempts to cheating, which over the years had become sophisticated.

Students are not allowed to bring any metal items to test sites.

"It is better if students wear clothes and shoes without any metal accessories. But students are allowed to wear glasses with a metal frame," the local education department in Henan Province said in a statement issued before gaokao.

Such notices are shared with schools and students, with the latter allowed to visit the test sites ahead of the big day to familiarize themselves with the security procedure they would go through, and be fully prepared to what is yet to come.

An officer of the school told Shanghai-based outlet The Paper that the student who was almost blocked from taking the test had not been to the site before Thursday.

Some 9.75 million students around the country are taking the crucial two-day this year, which will determine which university they will enter and what major they will do.

Students are under pressure to score high and secure a spot in top colleges, while authorities have their work cut out to guarantee problems are kept at bay.

This means introducing a series of measures to facilitate the commute of students to their test sites, guarantee their safety inside the designated schools, create a noise-free environment, and safeguard the fairness of the tests.

As a standard procedure, every student needs to have their ID card inspected, before going through metal detectors and being checked for any forbidden objects. Their fingerprints are also registered, and their photos taken.

Authorities have beefed up steps to crack down on cheaters, who have been using technology to innovate new methods to get extra and illegal help during the exam.

In the provinces of Sichuan, Liaoning and Henan surveillance drones have been deployed, while facial recognition technology was used for the first time this year in Shenzhen, south China’s Guangdong Province.

The Ministry of Public Security, in coordination with local authorities, has been conducting intensive investigations about online sales of cheating devices since the beginning of this year.

In May, Chinese police arrested 50 suspects and seized over 100,000 pieces of high-tech wireless cheating instruments.

"The campaign, launched in Liaoning, Shandong, Hubei, Guangdong and Sichuan provinces and the Inner Mongolia Autonomous Region has busted 12 criminal gangs," the ministry said in a statement.

According to China’s amended Criminal Law, any candidate who uses underhand tactics during gaokao faces a custodial sentence of up to seven years.

In 2016, six teachers were handed a jail sentence from one year to 26 months after being convicted of "illegally obtaining state secrets," by the Intermediate People’s Court of Shenyang City.