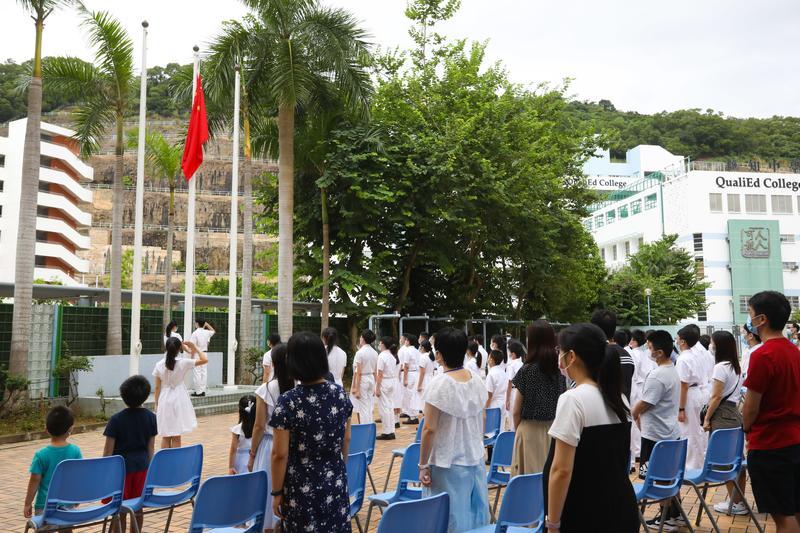 Staff, parents and students stand at attention during a flag-raising ceremony at Heung To Secondary School in Tseung Kwan O to celebrate the 71st anniversary of the founding of the People’s Republic of China, Oct 1, 2020. (Photo: China Daily)

More than 70 parents and students at Heung To Secondary School (Tseung Kwan O) attended the event on Thursday to marked the 71st anniversary of the founding of the People’s Republic of China.

The event was mandatory for the school’s Form 1 students. Older students can join voluntarily.

Cheung Ka-yan, a Form 5 student, said the event helped increase her and her peers’ sense of belonging to the nation and the city.

“Teachers talked about national identity in class, but I think it’s not enough. We need such events, out of the classroom, to experience and feel it,” Cheung said.

Louie Ho-shun, leader of the school’s flag-raising team, said the ceremony could consolidate students’ sense of national identity as it offers a good chance for them to grasp a better understanding of the nation and its symbols — the flag and the national anthem.

Louie added she and her team members enjoyed the cooperation and proactively participated in the event despite the fact that the day is a holiday.

Principal Tang Fei said he believes the event will awaken students’ national identity, noting this year’s National Day is meaningful as it is the first one since the new National Security Law and National Anthem Ordinance took effect in Hong Kong.

Tang said the implementation of the National Security Law in Hong Kong restored peace and stability in the city following a prolonged social unrest last year.

“As the epidemic in Hong Kong is stabilizing and social distancing restrictions easing, I hope students and their family can enjoy the holiday and cherish the peaceful social environment,” Tang said.

A parent surnamed Ng said her 12-year-old daughter and 8-year-old son both participated in the flag-raising ceremony. She said she hopes her understands that Hong Kong is a part of China and be proud of their identity as Chinese.

“I also hope all Hong Kong people can make a united effort for a better future of this beautiful city,” she added.