CHINA Studying so far and yet so near

Studying so far and yet so near

'Stranded' in Shenzhen for more than a year because of the pandemic, thousands of cross-border students have been struggling to keep their campus studies alive with educators' and social workers' help. 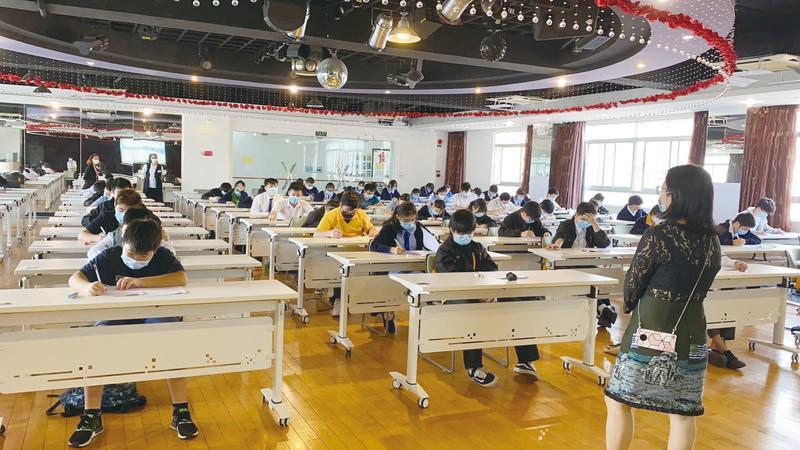 While the prolonged pandemic has shattered businesses and social life, it has also ruined the school lives of thousands of cross-border students who used to commute daily between Hong Kong and Shenzhen.

They're now stuck at home, robbed of the privilege of face-to-face lessons and association with their peers.

The travel restrictions have prevented most of an estimated 27,000 students living in Shenzhen from crossing over to the special administrative region for their studies. Making up nearly 3 percent of Hong Kong's some 875,000 students from kindergarten through secondary school, they've found life hard to cope with without the non-virtual campus experience they used to have.

A group of educators and social workers in Shenzhen and Hong Kong have been moved by the students' plight, assuring them they are not all forgotten.

Her aim was to familiarize herself with the examinations process and help her son to be better equipped in future.

She shared with her child many "useful" tips by getting down to the nitty-gritty of preparing for the English-language, mathematics and Chinese tests.

Despite the travel curbs, Tang's son moved to Hong Kong in October for face-to-face classes, accompanied by his father who had applied to his company to work from home. After completing the mandatory 14-day quarantine, they rented an apartment near the boy's school in Whampoa. But classes had to be suspended again a month later.

Most of cross-border students have stayed behind in Shenzhen, taking online lessons or studying on their own. They are hampered by the inconvenience of securing textbooks, getting onto the internet and taking examinations. Facing the drastic changes in pursuing their education, they've been forced to take a back seat.

Tang hopes to do as much as she can, not only to plan for her son's future, but also to help more students struggling to meet the challenge.

She was invited by the Hong Kong branch of the International Social Service — a major social organization serving cross-border students — to invigilate. So far, its Shenzhen centers have helped Hong Kong schools conduct examinations for more than 1,000 students in the southern Chinese mainland city and offered them regular in-person courses. Since the new school year began in September, the students have been unable to attend classes in Hong Kong for almost half a year. A growing number of public and private organizations in Hong Kong and Shenzhen have risen to the occasion, joining forces to create a better educational environment for them.

By delivering textbooks across the border, synchronically organizing examinations in Shenzhen and Hong Kong, and jointly designing face-to-face classes for the stranded students in Shenzhen, they've found a new collaboration mode to replace what the students have lost.

"All we've done is telling the students they've not been forgotten," said Iris Liu Kam-fung, director of a cross-border casework program at the ISS Hong Kong branch.

She said many cross-border students in Shenzhen have gradually lost the feeling of being a student as their Hong Kong classmates have had face-to-face classes intermittently and their mainland peers get back to normal. In one case, a student had to confine himself at home for a long time, fearing his mainland peers might suspect he's unable to attend school as they do.

Although about 2,500 Primary Three to Five students resumed classes in Hong Kong briefly in June and July, most of the 27,000 cross-border students have never returned to their campuses throughout last year. Although the mass public COVID-19 vaccinations kicked off in Hong Kong in late February, it's still anybody's guess when normal cross-border travel can resume.

To offer equal educational opportunities to the Shenzhen students, the ISS arranged for them to take secondary school entrance examinations. Without its help, schools might have had to cancel the tests for both cross-border and Hong Kong students, and rely on their daily performance in school or past grades for assessment.

Most of the examinations were conducted simultaneously with those in Hong Kong. Printed exam papers were delivered to Shenzhen in advance, and the scanned versions were sent back to the special administrative region after the tests. During the exams, Hong Kong teachers joined Shenzhen employees at the examination centers and helped monitor the students remotely and offer guidance.

Ni Yijie, an ISS member of its Luohu center in Shenzhen, said their workload has been stretched to the limit amid the pandemic. She and her colleagues used to conduct all-day exams, covering nine subjects, for more than 80 secondary students from various grades.

The examinations could also help students to gradually get used to homeschooling and offer them a chance to meet up with friends. "They're nervous but happy," Ni said.

Untoward situations do crop up from time to time. A Secondary One student once left his identity card at home, and even Hong Kong teachers couldn't verify his identity as he had never been to the school physically since the pandemic broke. However, he was finally allowed to take the test.

To cope with the demand, more social service groups have joined in providing such services for students, while some private educational institutions offer paid services. Given the limited resources of public organizations, private institutions have been playing a key role in catering to the needs of cross-border students.

Sheung Shui Pui Yau Kindergarten, just a stone's throw from the Lok Ma Chau checkpoint, has teamed up with private educational centers in Shenzhen since September to conduct face-to-face classes for about 30 students in Shenzhen. When their Hong Kong peers had to return to homeschooling due to the fourth wave of the pandemic late last year, the Shenzhen students have been enjoying uninterrupted in-person teaching for four months.

The school first approached a center in Futian district, but was hampered by the lack of space as only about half of the students could study together. Two weeks later, it transferred them to bigger facility in the Nanshan district.

The students can thus have their original Hong Kong courses, taught by a Hong Kong teacher hired by the school. The all-day services include meals and transportation provided by the center, costing each student about 2,000 yuan (US$304) a month.

Tam Wan-chun, a Hong Kong teacher involved in the operation, said face-to-face interactions are essential to a student's preschool learning and growth. Students at online classes can only sing in front of the camera, but here, they can hold hands and sing along with their peers.

Serving as a temporary school for these kindergarten students, the education center also provides venues for cross-border primary students to have online lessons, as well as extra tutorial lessons. It also rents out the venue to some Hong Kong schools to conduct examinations remotely for students in Shenzhen.