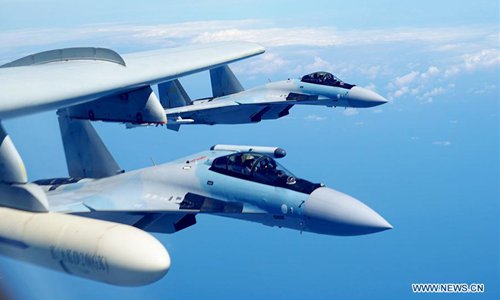 Two Su-35 fighter jets and a H-6K bomber fly in formation on May 11, 2018. The People's Liberation Army (PLA) air force conducted patrol training over China's island of Taiwan on Friday. Su-35 fighter jets flew over the Bashi Channel in formation with the H-6Ks for the first time, which marks a new breakthrough in island patrol patterns, said Shen Jinke, spokesperson for the PLA air force. (Photo: Global Times)

Shen said it was the first time that Su-35 fighter jets and H-6K bombers flew over the Bashi Channel, and included new fighter jets in combat training and tested their combat capabilities, the PLA Air Force announced on its Weibo account.

Song said that another highlight of the latest island patrol is the joint operations of two theater commands in military drills targeting Taiwan.

The air force has conducted a number of island patrols since April 18 to enhance its ability to safeguard national sovereignty and territorial integrity.

A PLA Air Force formation conducted island patrols on April 26, and the formation, made up of fighters, early warning and surveillance aircraft, and H-6K bombers flew over the Bashi Channel, Xinhua News Agency reported.