Instead of shrieking at the sight of rats in the NYC subway, Chen Yang said she silently reads books at the library of Guangzhou's Panyu Square Station.

The Guangzhou resident found an echo in the tweet of Danny Haiphong, an activist and writer who posted two photos of the NYU subway and Guangdong subway on Tuesday and tweeted that "Train station in Guangzhou, China versus train station in New York City, USA." 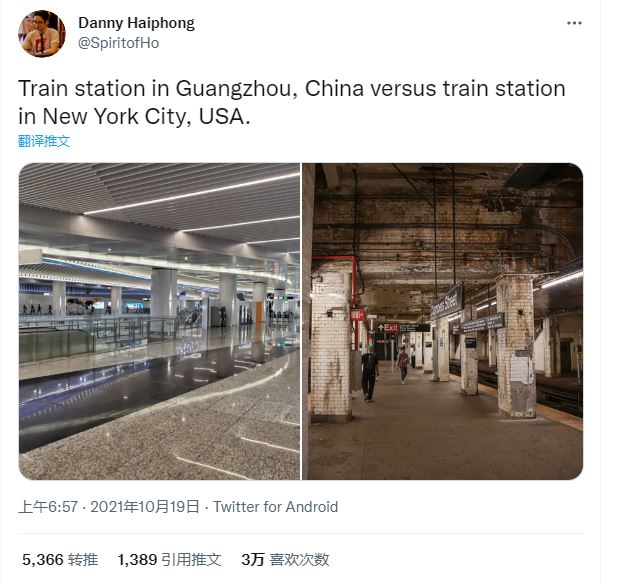 The screenshot of Danny Haiphong's tweet of two photos of the NYU subway and Guangdong subway.

The tweet went viral and received thousands of comments, likes and retweets. It also attracted attention of many Chinese netizens and some Chinese media.

"The NYU subway has a history of more than 100 years," said Chen. "I admire its glorious history, but to me, many of its equipment, trains and stations' decorations are a thing of the past."

"As a city girl, I prefer shiny new buildings and trains with cool appearance and modern equipment," said the woman who pursued her postgraduate degree in the United States. "Though sometimes you may smell food, especially fillings of steamed buns, on China's public transportation, the environment in general is getting much better."

Some argued on Twitter that the photo of NYU subway uploaded by Haiphong was "deceptive"—instead of showing the modern portion of the Chambers Street station, it showed a portion that has not been used for years. But many admitted that on average the NYU subway is "often decaying and generally very poor". 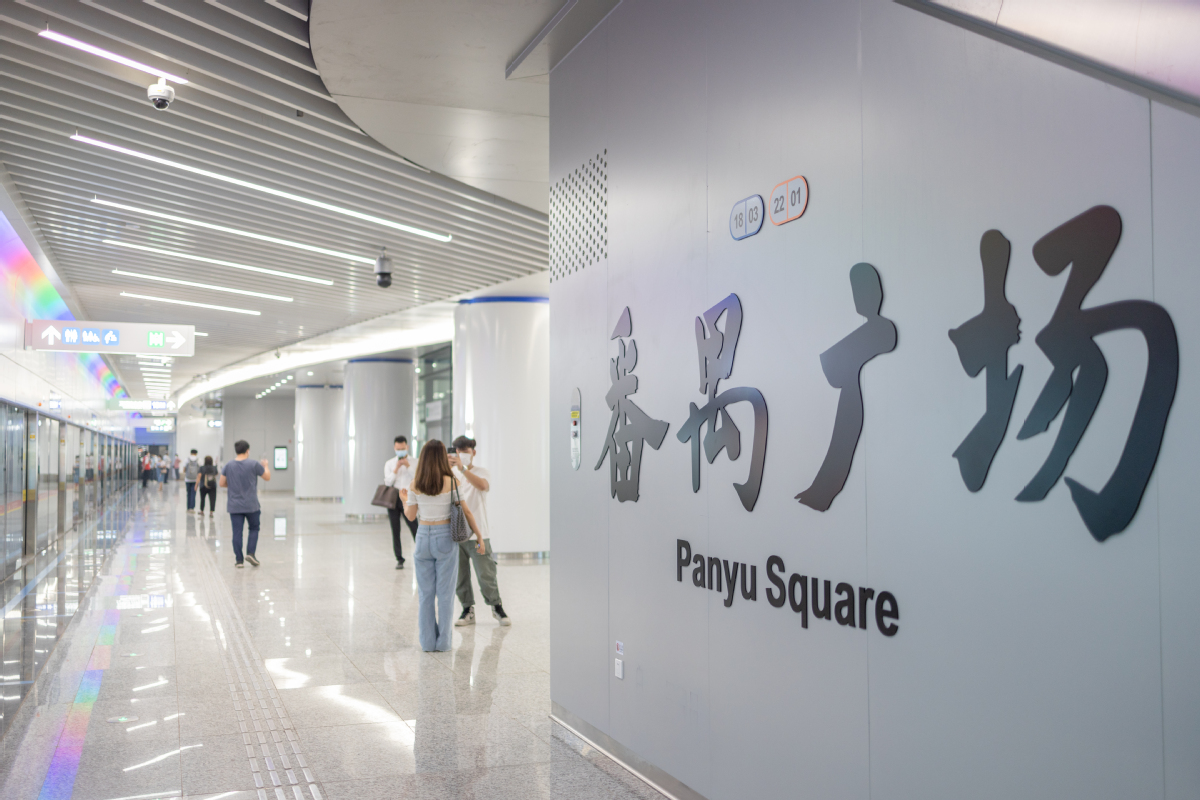 Photo taken on Sept 28, 2021 shows the Panyu Square station of the Guangzhou Metro Line 18, which officially started operation on that day. (Photo: IC)

As the photo puts it, the Guangzhou Metro Line 18, however, is brand-new and has adopted many new technologies.

Its subway trains, at a maximum speed of 160 kilometers per hour, are the fastest subway trains in the Guangdong-Hong Kong-Macao Greater Bay Area.

Totaling 58.3 kilometers, the system started operation on September 28 and now has nine stations. At the Panyu Square Station, which is the largest, commuters can read books in between the trains. 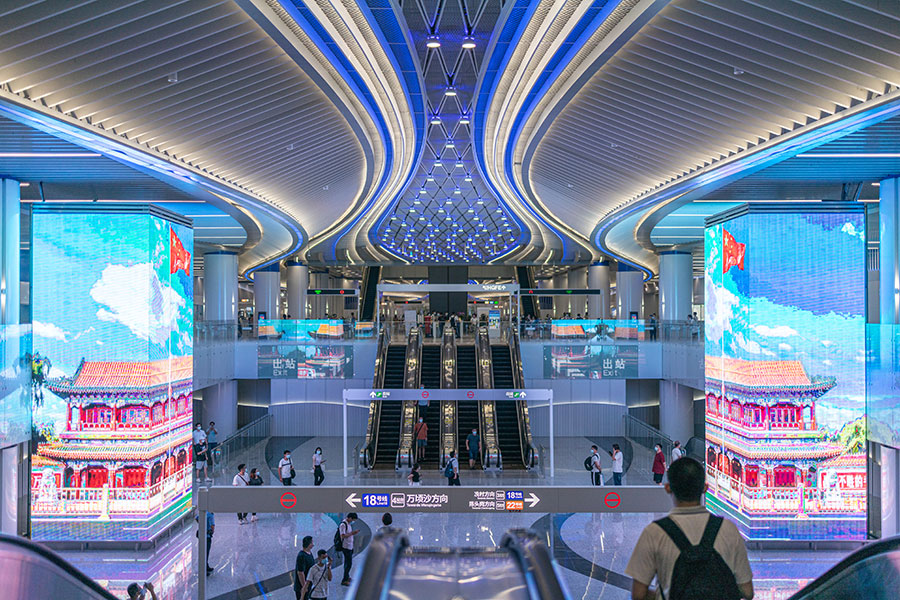 Photo taken on Sept 28, 2021 shows the Panyu Square station of the Guangzhou Metro Line 18, which officially started operation on that day. (Photo: IC)

In cooperation with the Guangzhou Library, Guangzhou Metro also opened the library for people to borrow books and take them home for reading.

"The library is my favorite," said Jiang Yang, who studies at the Sun Yat-sen University in Guangzhou. "It's a place for you to find peace for at least a moment. I also like the subway's setting different compartments with different temperatures. You may choose a cooler seat if you are dressed in layers and sweat."

"Many of the inner parts of the compartments shine like metal and the round light on the roof can adjust the brightness," he said. "It's becoming more people-oriented." 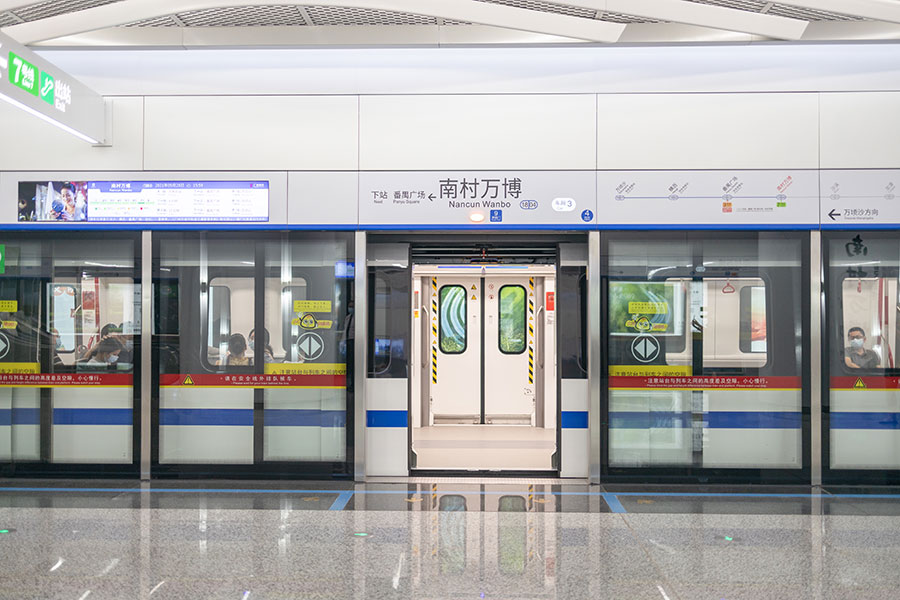 Photo taken on Sept 28, 2021 shows the Nancun Wanbo station of the Guangzhou Metro Line 18, which officially started operation on that day. (Photo: IC)

The platform screen doors of all the stations are equipped with screens that can show the congestion of each compartment for commuters to choose less crowded compartments. On top of the screen doors, a screen shows where the train is and the map of the subway line.

To take the trains, people can either swipe cards, scan QR codes or use face recognition. Some stations also provide medicine and disposable raincoats for visitors in need, according to the Wechat account of the Guangzhou government.

It also said that the subway in Guangzhou totaled 500 kilometers by 2020, which was among the top five of the world's cities. In 2020, the Guangzhou Metro transported over 2.4 billion passengers.

As nine new subway lines will start construction during the 14th Five-Year Plan (2021-25), the city's subway will exceed 860 kilometers, it said.