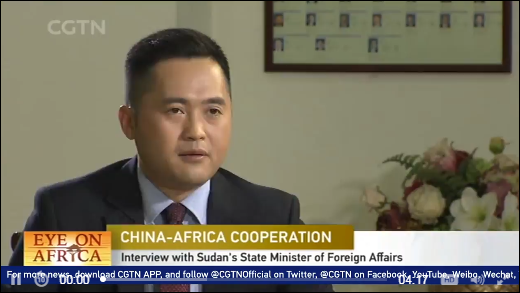 China and Sudan first established diplomatic ties in 1959. Since then, the two countries have forged close economic and trade relations.

"The Chinese, Sudanese diplomatic ties have been some of the most distinguished ties we have had in our Ministry of Foreign Affairs," said Sudan’s State Minister of Foreign Affairs Osama Faisal in an interview with CGTN.

In recent years, the footprint of Chinese companies has increased in Sudan.

Osama told CGTN that the Sudanese community and government appreciate very much the performance of Chinese companies led by the China National Petroleum Corporation (CNPC).

The social corporate responsibility programs of these firms have contributed a lot to the country.

Osama invited more Chinese companies to invest in Sudan, collaborate with the private sector and explore the business opportunities there.

In fact, the Sudanese government intends to fast-track all businesses coming from the Chinese side. Osama said, "We are intending to open new doors in sectors like minerals, tourism, meat production, and we are also intending to increase exports from Sudan to China."

The Forum on China-Africa Cooperation (FOCAC) Beijing Summit 2018 will be held in September.

Osama told CGTN that it’s going to be a tremendous opportunity for African countries to forge closer cooperative ties with China and for Chinese companies to cooperate more with Africa.

He added that Sudan started economic cooperation with China a long time ago, and most of the neighboring countries got their economic relationship with China through Sudan.