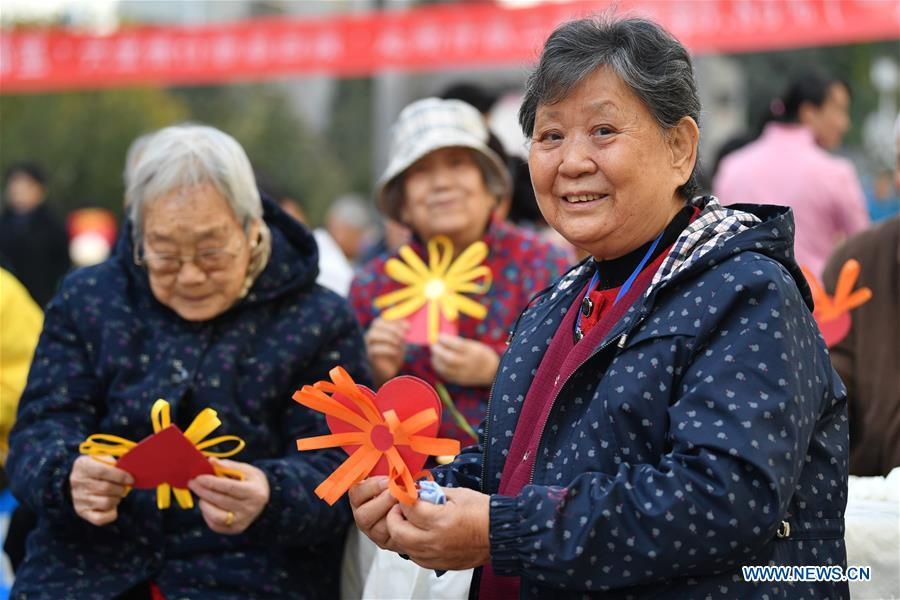 The elderly show the greeting cards they received at a community in Xi'an, northwest China's Shaanxi Province, Oct. 23, 2020. An event to greet the upcoming Senior's Day, also known as the Double Ninth Festival or the Chongyang Festival, was held in the community. (Photo: Xinhua)

Recent suggestions by a scholar from the Chinese Academy of Social Sciences that men and women should retire at the same age has sparked heated public discussions, with some netizens believing the policy should be implemented in the context of ensuring equal wages for equal work for men and women and address the problem of age-related unemployment.

Zheng Bingwen, a member of the National Committee of the Chinese People's Political Consultative Conference (CPPCC) and director of the Social Security Laboratory at the Chinese Academy of Social Sciences, said Sunday that there has been a discussion about raising the retirement age in the academic world for about 15 years. "As for the current different retirement age between men and women, I think it would be better to change it and set the retirement age at the same level."

China's current legal retirement age is 60 for male employees, 55 for female cadres and 50 for female workers.

"In most developed countries, men and women have the same retirement age. Women's life expectancy is longer than men's, which is the case in all countries, and this is an important physiological phenomenon. From the cultural perspective, most developed countries believe that making women's retirement age lower than that of men is a form of sexism. These two factors are also enlightening to China and worth thinking about," Zheng added.

According to National Business Daily, countries in which men and women retire at the same age account for the majority. A survey conducted by the United Nations of 166 countries in 2002 showed that 64.74 percent of countries and regions have implemented the same-age retirement system for men and women, and the proportion rose to 66 percent in 2015.

However, there was heated debate among netizens about the difficulties women would face to balance work and life if the same-age retirement system were introduced.

"Women now are encouraged to have a second child and delay their retirement age. Why is society demanding so much of women?" one netizen commented on China's Twitter-like social media platform Sina Weibo, receiving 6,492 likes.

Some netizens also predicted that "perhaps there will be a wave of old people searching for jobs in the near future," and argued that men and women should first be paid equal wages for equal work before retirement age is discussed.

"The suggestion could be perfected if individuals can choose to retire early based on actual conditions on the premise of retiring at a specified age," another netizen suggested.

Chen Yaya, a research fellow at the Shanghai Academy of Social Sciences, told the Global Times Monday, "Men and women should retire at the same age, with certain flexibility. That is to say, women can have a choice to decide whether they want to retire before the legal retirement age or continue working and retire at the same age as men."

"The retirement system should not distinguish between genders, so as to avoid suspected gender discrimination," Chen added, "In the past, the setting of different retirement ages may have led to gender discrimination, believing that women should help take care of grandchildren by retiring earlier. However, as times have developed, the concept should also be changed."

Delaying the retirement age for women is just a way to show respect to women and improve their social status and it does not mean that it is mandatory for women to retire at 60 or 65, but gives them more options and opportunities to earn more salary and achieve their social value, which is not inconsistent with other policies, Zhai Zhenwu, president of the School of Sociology and Population Studies at Renmin University of China, told the Global Times to address the concerns from netizens on Monday.

The policy of extending the retirement age will be preceded in an orderly manner. It will not suddenly raise the age to 65 all at once, and there will be corresponding changes in the relevant retirement pension system to protect women's rights and interests, Zhai added.