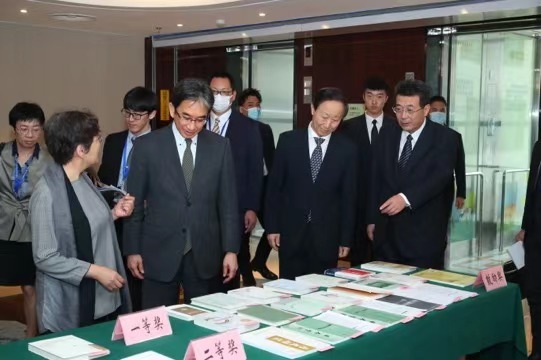 Experts view academic works by Chinese scholars that were awarded for their contributions to Japanese studies. (Photo: China Daily)

Forty-seven Chinese scholars were honored on April 1 by the Sun Pinghua Academic Fund for Japanese Studies, which was named after the former chairman of the China-Japan Friendship Association.

The fund, established by the Soong Ching Ling Foundation in 1997, aims to reward scholars who have made outstanding contributions to Japanese studies. Its awarding ceremony is held every three year.

Up to now, 142 monographes, thesises and other academic works related to Japanese studies have been awarded by the fund.

It has promoted cultural exchanges between people from China and Japan, while encouraging young scholars to observe and research on Japan in a scientific way.

Jing Dunquan, vice-chairman of the Soong Ching Ling Foundation, said the next year will mark the 50th anniversary of the normalization of diplomatic ties between the two countries, and the fund will keep inspiring young researchers whose studies help to strengthen the bondings between people from both sides.