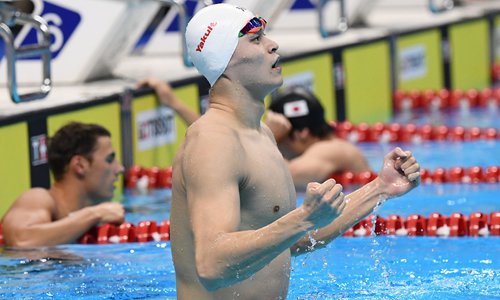 The CSA issued a statement on Sunday saying that the clash was due to the failure of testers from the International Doping Tests & Management (IDTM) to provide official identification so that Sun Yang refused to  participate in doping testing in September 2018.

The International Swimming Federation (FINA) has already announced the test was invalid and void and Sun Yang did not commit any anti-doping rule violation, according to the CSA statement.

Zhang Qihuai, Sun's attorney from Beijing-based Lan Peng Law Firm, told the Global Times on Sunday that they would file a lawsuit against the Sunday Times if the latter does not apologize and redact the article.

The national newspaper  reported that Sun refused to cooperate with the testing as the testers could not provide official identification, and the two sides then ended up in a "violent clash" with Sun's security guard using a hammer to destroy Sun's blood sample.

The Sunday Times failed to mention the FINA announcement on the case.

"The Sunday Times maliciously reported the incident, which seriously violates Sun Yang's right to privacy and his reputation," Zhang said.

Zhang said Sun had drawn blood in cooperation with the testers without any violent conflicts. The blood sample is still being preserved by Sun's team doctor.