The Indonesian Navy, with the assistance of China's People's Liberation Army Navy, has managed to lift a life raft and other fragments belonging to the sunken Indonesian submarine KRI Nanggala-402 in the Bali waters. 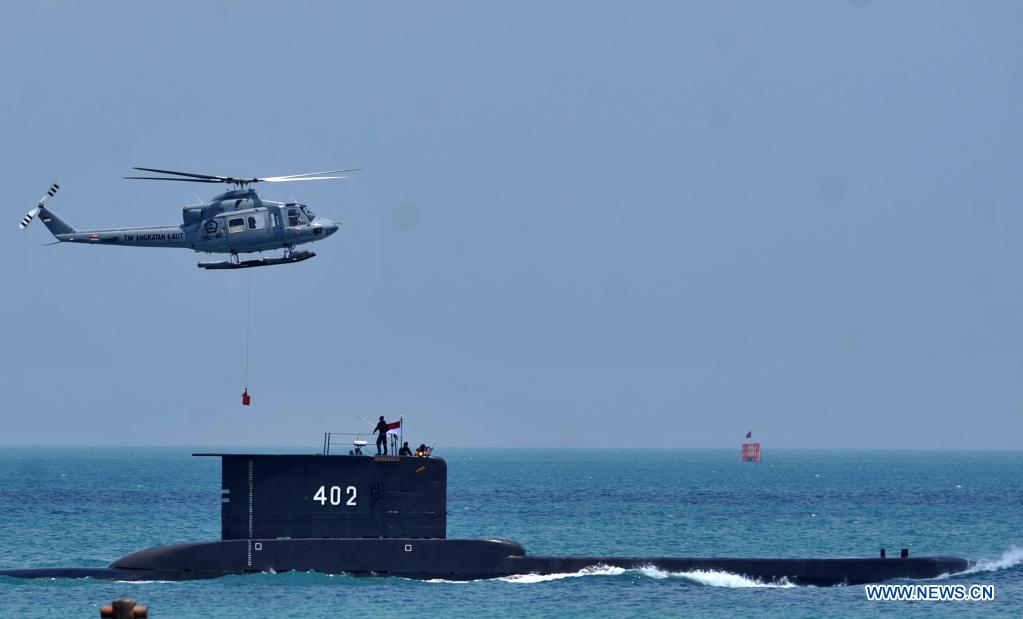 File photo taken on Oct. 5, 2017 shows Indonesian submarine KRI Nanggala-402 during a ceremony honoring the 72nd anniversary of the country's Armed Forces Day at Cilegon, Banten province, Indonesia. The Indonesian submarine with 53 people aboard is feared to have sunk about 60 miles off the northern coast of Bali Island on early Wednesday after losing contact, according to local media. (Xinhua/Zulkarnain)

At a televised press conference on Tuesday, Commander of the Indonesian Navy's 2nd Fleet Rear Admiral Iwan Isnurwanto said the Chinese research vessel Explorer 2 has retrieved a 700 kg life raft from the seafloor near Bali.

"Vessel Tan Suo Er Hao (Explorer 2) succeeded in lifting the KRI Nanggala's life raft. We have kept it well as evidence that the ships from our friendly country had carried out their duties," Isnurwanto told a media briefing, which was also attended by the defense attaché of the Chinese embassy in Jakarta, Chen Yongjing.

The life raft was buried in the mud before being retrieved, Isnurwanto said.

Other objects lifted by the Chinese vessel included the submarine's antenna, the torpedo cable protector on the vertical rudder, the hydrophone in the bow, and the guidebook.

"No other major parts have been lifted yet, such as the bow section, sail section, and stern section," Isnurwanto said.

During the operation, Explorer 2 also found a mud-covered crater with a diameter of 38 meters and a depth of up to 15 meters near the location where the submarine sank, he said, adding that the Chinese vessel focused on the crater and extended the search with sonar as it is muddy and dark in the water.

The Indonesian Navy has been coordinating with the Chinese side to continue the lifting process, said Isnurwanto.

KRI Nanggala-402 sank in the waters north of Bali on April 21 with 53 people aboard, including 49 crew members, one commander, and three arsenal personnel.

The submarine, which has been used by the Indonesian Navy for about 40 years, sank at a depth of 838 meters under the sea.

The accident occurred when the submarine was in the middle of a training session to carry out torpedo firing. The exercise was aimed at fostering operational readiness of soldiers and units in the Bali waters.