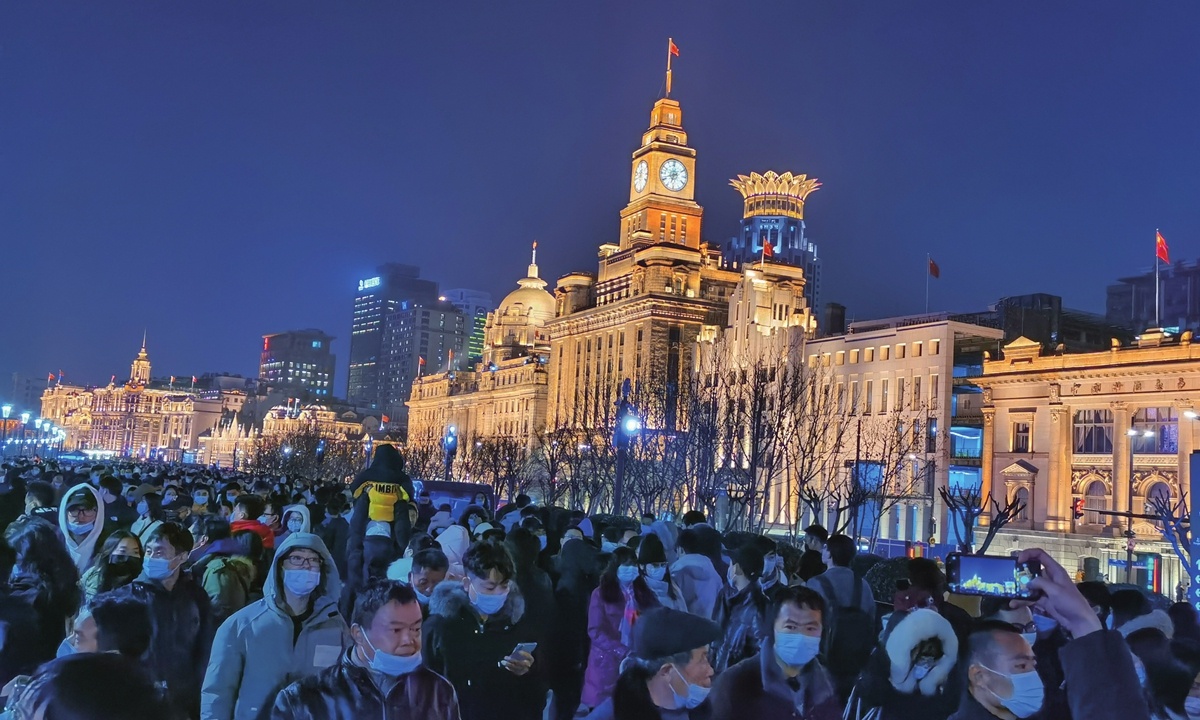 Chinese tourists sightsee on the Bund next to the Huangpu River in Shanghai, during the 2021 New Year holidays. (Photo: VCG)

Chinese experts have warned there are risks of new coronavirus outbreaks with the arrival of Spring Festival holidays, although super spreaders and a patient testing negative 11 times before being confirmed were "exceptional cases."

Both Shenyang and Dalian have seen super spreaders who enlarged the virus' spread quickly.

Dalian extended its quarantine to 14 days at a quarantine center and seven days of home isolation, or 14+7, as this outbreak showed a stronger transmission capability and longer incubation periods, local officials said on Monday. One Dalian patient tested negative 11 times, while in some regions, infections were still found after six rounds of massive testing.

Having a "14+7" policy in place already, Beijing announced on Monday that it will carry out closed-loop management and quarantine people who entered China less than 21 days.

"Stricter quarantines showed that local governments are highly alert when facing pressure from the virus' spread amid cold weather and the potential travel peak around Spring Festival," Yang Zhanqiu, a deputy director of the pathogen biology department at Wuhan University, told the Global Times on Monday.

So far, the super spreaders and fake negatives are exceptional, said Yang, adding there is no need to generalize strict anti-epidemic measures for all. "If 30 percent of people test positive very late or even after the final day, we should really consider prolonging the quarantine period.

"I would say the virus did not mutate beyond our knowledge but the recent cases are a warning that it is still not the time to loosen guard against the cunning virus, especially in winter and crowded spaces," Yang said, hinting that the upcoming Spring Festival, which falls on February 12 this year, could be a high-risk period for outbreaks if anti-epidemic measures are not well implemented.

Whether major outbreaks occur during the Spring Festival period relies on whether there are new cases outside the currently identified infection chains two weeks ahead of the holidays, Yang said, explaining "the incubation period for most coronavirus patients is between five and 14 days. If no new patients are found, people flows during the holidays are safe."

Yang called for Chinese cities to detect and quarantine new infections in a timely way, which will help people enjoy a safe family reunion during the holidays.

A year has passed since China detected and gradually got to know the cunning virus, and the country has figured out ways to cope with it. China has basically controlled the epidemic, and whenever there are new infections, they will be spotlighted, experts noted.

In addition to domestic outbreaks, a global resurgence added to Chinese people's sensitivity as intense attention was paid to two international arrivals who were confirmed to carry the coronavirus variant that was first reported in the UK.

Moreover, coronavirus has also been detected on the outer packaging of auto parts in some cities in recent days, which was not seen in the earlier outbreaks in China.

On Monday, North China's Tianjin Municipality reported five samples of auto parts' outer packaging that tested positive for COVID-19. Over the weekend, cities in East China's Shandong, North China's Inner Mongolia Autonomous Region, and Shanxi and Hebei provinces have also found the virus on the outer packages of auto parts shipped from a site where one worker was confirmed to be infected with COVID-19.

Yang said any contaminated goods, including auto parts, have the potential of passing the virus to people who touch the goods, and such goods may even infect them.