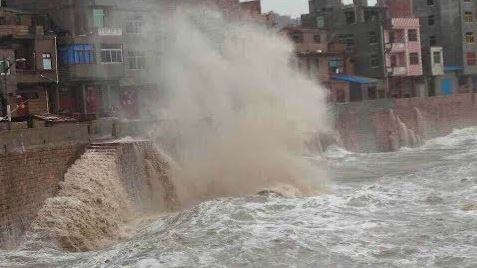 The picturesque Xiyang Island, which located about 40 kilometers southeast from the coast of China's Fujian Province, has been one of the first places to take the brunt of super typhoon Maria.

The strong typhoon made landfall on the island at around 9:10 a.m. local time on Wednesday, causing tsunami-like waves that were roughly five-stories high.

All the buildings along the coast were seriously flooded, but residents had evacuated to higher ground in the mountains due to a red alert warning given two days before the typhoon struck. So far, no injuries have been reported.

Construction has just started, and will take around three years to complete. It is worth 236 million yuan, or $60 million.

Local residents believe the project will greatly boost the security of the area and benefit their livelihood. Around 12,000 people live on the island. Almost all of them are in fishing businesses.