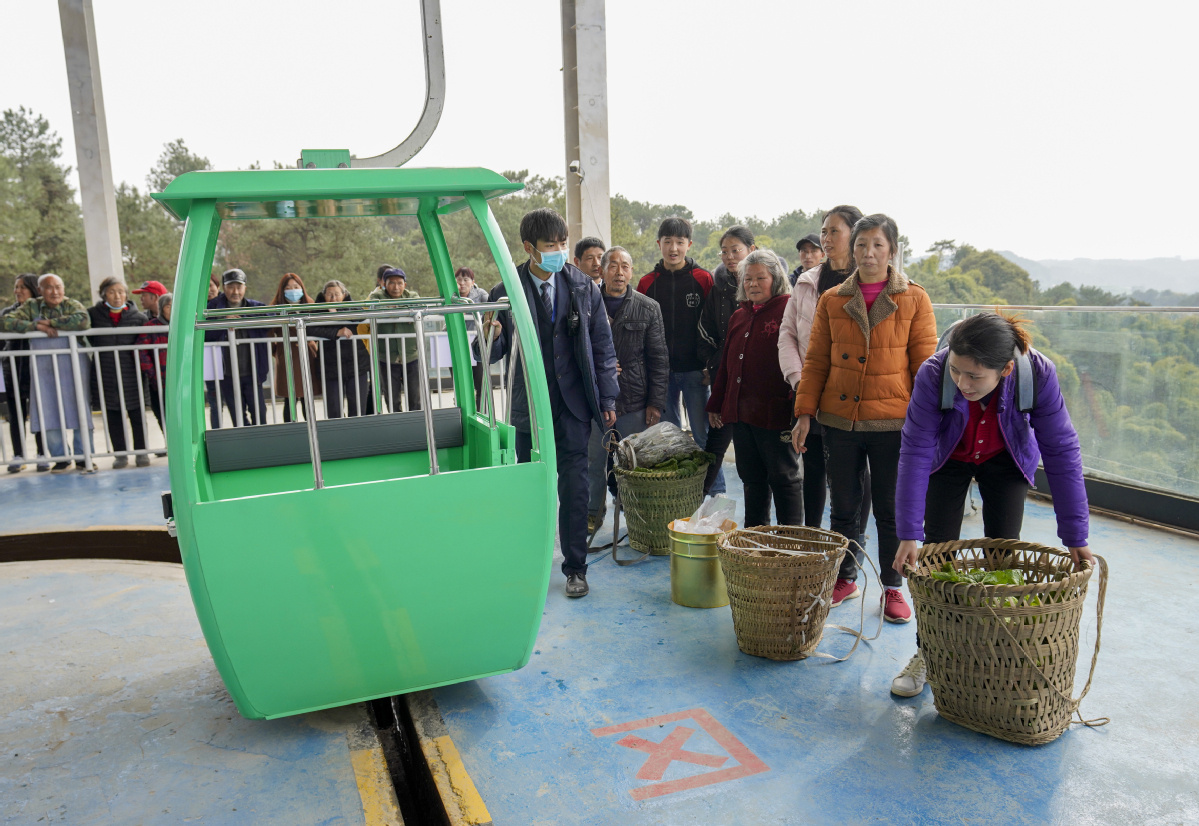 Farmers living in mountainous areas in Linshi township of Chongqing's Fuling district wait to take a cable car to sell their farm products to tourists on Tuesday. The local government built the 3-kilometer cable to transport users off the mountain as part of a poverty alleviation program. (Photo: Xinhua)

China has secured sufficient supplies of daily necessities for Spring Festival and will make sure prices remain stable during the holiday, which has seen a significant jump in people staying put to reduce the risks of COVID-19 infections, an official with the Ministry of Commerce said on Wednesday.

Zhu Xiaoliang, director of the ministry's consumption promotion department, estimated that compared with the average figures during this period, 48 million more people in 36 large and medium-sized cities across the country have decided to stay where they work this year to celebrate Lunar New Year, which falls on Friday.

"Prices of farm products registered a temporary increase recently due to a combination of factors including cold weather, rising costs and impact from the international market," he said during a news conference.

"But as measures to increase supplies and stabilize prices have been taken, a wide variety of products are available on the market to meet residents' needs," Zhu added.

Ministry data shows that in the first week of February, prices of farm products nationwide dropped by 1 percent from the previous week. Major price decreases were recorded in eggs, which went down by 6.4 percent week-on-week, and pork prices slid by 11.5 percent during the same period.

In Beijing, where a large number of migrant workers have stayed for the holidays, stocks of daily necessities in major supermarkets have doubled or tripled the usual amount, according to Zhu.

"We have also asked stores and markets to stay open for business or extend their opening hours during the festival, and encouraged them to provide delivery services," he said, adding that its initiative has also been adopted in Guangdong and Sichuan provinces.

"Because prices of beef and lamb are still on the rise, we plan to release 1,000 tons of each of them on Wednesday," he said.

Zhu said strict epidemic prevention and control measures will remain a priority, and all businesses will be required to strictly abide by epidemic-control rules.

According to Mi Feng, spokesman for the National Health Commission, China reported no new local infections for three consecutive days as of Tuesday, and the number of local cases had been falling for 15 days in a row. Cluster infections in some regions have been effectively controlled, he said.

He added that as of Tuesday, the country had administered 40.52 million doses of COVID-19 vaccines through its emergency immunization program targeting high-risk groups.