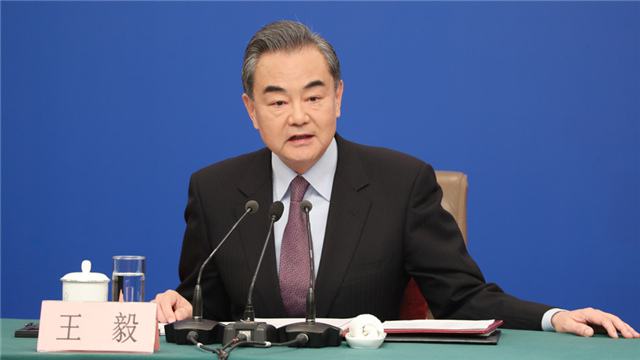 BEIJING, April 19 (Xinhua) -- Chinese State Councilor and Foreign Minister Wang Yi said on Saturday that at the critical moment when the world is combating the COVID-19 pandemic, supporting the World Health Organization (WHO) and its director-general is to safeguard the philosophy and principle of multilateralism.

He made the remarks when holding a phone conversation with WHO Director-General Tedros Adhanom Ghebreyesus, noting that the support is also an act to secure the United Nations' status and role and maintain the international solidarity in the face of the disease.

Wang said he made the phone call to show that the Chinese government and people firmly support the WHO, expressing confidence that fair-minded people will tell right from wrong, and that the international community and people across the world hold the same attitude.

Noting that Tedros was elected as the WHO director-general with a large margin and has since won a high degree of trust of member states, Wang said that Tedros, as the first director-general from a developing country on the African continent in particular, also symbolizes the advancement and development of human civilization.

Since taking office, the director-general has been actively committed to the cause of global public health and done a great amount of creative work, which has been highly commended by various parties, Wang said.

Wang said the WHO is needed to continue to play its due and important role in the fight against the epidemic.

The smears and attacks against the WHO have no factual basis, and pressure and coercion will not enjoy popular support, he said, adding no country with conscience will support them.

Facing the epidemic, the WHO is needed by people of all countries, and is needed to save lives and eradicate the virus, said the Chinese foreign minister, expressing his belief that Tedros will lead the WHO to continue to coordinate the international community to jointly fight the epidemic in a professional and scientific manner.

China always attaches great importance to the status and role of the WHO and is willing to increase its support for the organization through various channels based on the current cooperation, Wang said.

Wang noted that Chinese President Xi Jinping has, on various occasions, made it clear to the world that the coronavirus is the common enemy of humanity, and that only with solidarity and coordination can the international community prevail over the epidemic.

He said China stands ready to work together with all countries to strengthen anti-epidemic cooperation and overcome existing difficulties through thick and thin until a complete victory over the virus globally.

For his part, Tedros thanked China for its continuous and firm support for the WHO.

Echoing the opinion that supporting the WHO is to safeguard multilateralism, the WHO chief said that currently it is vital for the international community to enhance solidarity as the world is at a crucial moment of the COVID-19 pandemic and viruses respect no borders.

Only by pulling together to fight the pandemic could the human race halt the spread of the virus, he noted, or the virus would exploit the vulnerability of a divided international community to accelerate its spread, with the pandemic prolonged and more human lives lost consequently.

Despite the various attacks and smears on himself and the WHO, Tedros expressed confidence that history would do us justice with the truth eventually coming to light as long as we uphold the truth and do the right thing.