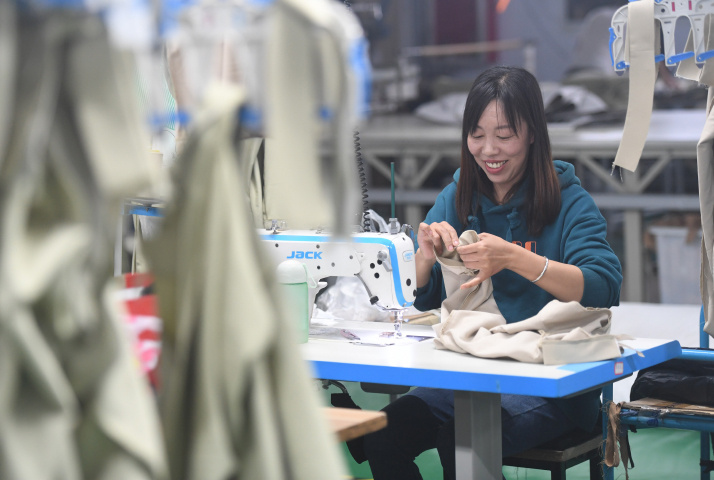 A migrant worker at a garment factory in Xingtai, Hebei Province, on March 28. (Photo: Xinhua)

When Li Bingjian went to work in Fujian, he was struck by the prosperity of the coastal province. He was from Sichuan, a mountainous province where the rural areas were still underdeveloped, and for years he had worked in different industries as an unskilled laborer without much success. So after stints in the construction industry and at a salt factory, he went to Fujian to work on a chicken farm.

That was back in the 1990s. The farm brought stability in his wandering life and taught him skills. He learned how to raise chickens using modern technology and was eventually promoted as a manager at the farm. By that time, he had been away from home for nearly two decades and he longed to go back. Then he learned a friend in his village was planning to start a chicken farm there and he asked if he could join in the venture.

The friend said yes. In 2017, Li was back in his hometown and supported by the local government, rented a plot of land to start the farm. He borrowed all the money he could and invested the entire amount, together with his savings.

In four years, thanks to the knowledge and experience he had acquired in Fujian plus the supportive local government policies, the farm had expanded well beyond expectations and provided jobs to over 100 local people.

"Returning home means I now have a career and at the same time can look after my family," a happy Li, now 42, told Farmer.com.

Li's return and transformation from a low-skilled laborer into a successful entrepreneur is an example of one of the trends indicated by the 2020 Migrant Workers Monitoring Survey Report released on April 30.

The report, published by the National Bureau of Statistics (NBS), indicates a sizeable drop in the number of migrant workers. The survey recorded 285.6 million migrant workers in 2020, which was 5.17 million fewer than in 2019, a 1.8-percent reduction year on year, the first decline in recent years.

Wu Shuai, an associate researcher with the Chinese Academy of Personnel Science, explained the reasons behind the decline in the number in a report in People's Daily.

Increasing urbanization, which has changed the population of rural areas, is a major factor. Migrant workers refer to people who are registered in rural areas and work in non-agricultural industries locally or travel to urban areas to work there for over six months in a year.

However, with accelerated urbanization, over 100 million rural residents obtained registration in urban areas during the 13th Five-Year Plan (2016-20) period. It meant they, as permanent urban residents, can now enjoy public services in the cities where they live and work, no longer having to move to other places in search of jobs.

Another factor is better education opportunities in rural areas. Many young people in villages now opt for higher studies, no longer had to look for jobs right after finishing middle school. The eradication of absolute poverty and the government's social security policy have enabled farmers and laborers in rural areas to afford better and higher education for their children. Young people therefore are entering the labor market at a later age, which has contributed to the decline in the number of migrant workers.

Last year, there was a big shock factor as well. Due to the impact of COVID-19, some migrant workers did not return to work after Spring Festival, in a departure from tradition. As they did not work outside their hometowns for over six months last year, they did not meet the official criterion to be regarded as migrant workers when the survey was conducted.

The survey also showed the average age of migrant workers increased to 41.4 last year, up 0.6 year compared with the previous year.

The report also revealed migrant workers traveled less far to look for employment. The number of registered workers who migrated to other provinces was 70.52 million last year, 4.56 million fewer than in 2019.

More chose to work in their home provinces though in a different area from their hometown, accounting for 58.4 percent of the total number of migrant workers, up 1.5 percentage points year on year.

Zhou Jun from Hunan Province had worked in large cities such as Beijing, Shanghai and Guangzhou in Guangdong Province as a salesperson, construction worker and factory worker for more than seven years. He returned home recently to grow grapes, another case of the switch to independent entrepreneurship from non-skilled work.

"Many of my classmates have also come back to grow fruits, raise crabs or run homestays," Zhou told People's Daily. "I have seen many successful examples of migrant workers returning home to start businesses. If people can find jobs and make money at home, who would want to leave their hometowns?"

However, this trend shows some divergence. While older workers tend to stay close to home, the younger ones are more inclined to work outside their home provinces. The average age of those working in their home provinces was 46.1 years while that of those venturing outside was 36.6.

Some two to three decades ago, going to work in the factories of coastal areas used to be the first choice for many young people, but today an increasing number is choosing other options.

Although the salaries in the secondary industry increased faster, it had fewer workers. The average monthly salary of migrant workers in the manufacturing industry was 4,096 yuan ($636), up 3.5 percent year on year, a little higher than the general average of 4,072 yuan ($632).

Wang Zhiyong, Director of the Department of Population Economics at the Institute of Population and Labor Economics of the Chinese Academy of Social Sciences, said the drop in the labor force will not affect the manufacturing industry as its demand for ordinary workers has decreased since smart technologies were introduced in 2008. What the industry needs now is high-caliber talent with knowledge and skills.

A larger share of the migrant workers—51.5 percent—are employed in the tertiary industry, up 0.5 percentage point year on year.

An increasing number of young people became couriers, especially food delivery people, as the average monthly income of the latter in 2018 was 7,750 yuan ($1,206). In the eastern city of Hangzhou, where the demand for food delivery services is higher, their average went up as high as 9,121 yuan ($1,419), according to a report released in January 2019 by online recruitment platform 58.com. In 2019, there were over 10 million couriers with 7 million of them in food delivery.

The report also showed the migrant workers' sense of belonging to the cities they live in has improved. Over 40 percent regarded themselves as locals, up 1.4 percentage points year on year. Also, 83.3 percent are used to living in cities.

Wang Yifang, a migrant from Shandong Province, now calls Beijing her home. She has been living in the city with her husband for nearly 20 years. Initially, they ran a small eatery selling baozi—steamed stuffed buns, and then a cigarette shop, before her husband decided to give up entrepreneurship for employment. Now he works for a company selling fire extinguishers and she has found a part-time job as a dogwalker. Wang told Beijing Review they have no plans to return to Shandong because there are more job opportunities in the capital.