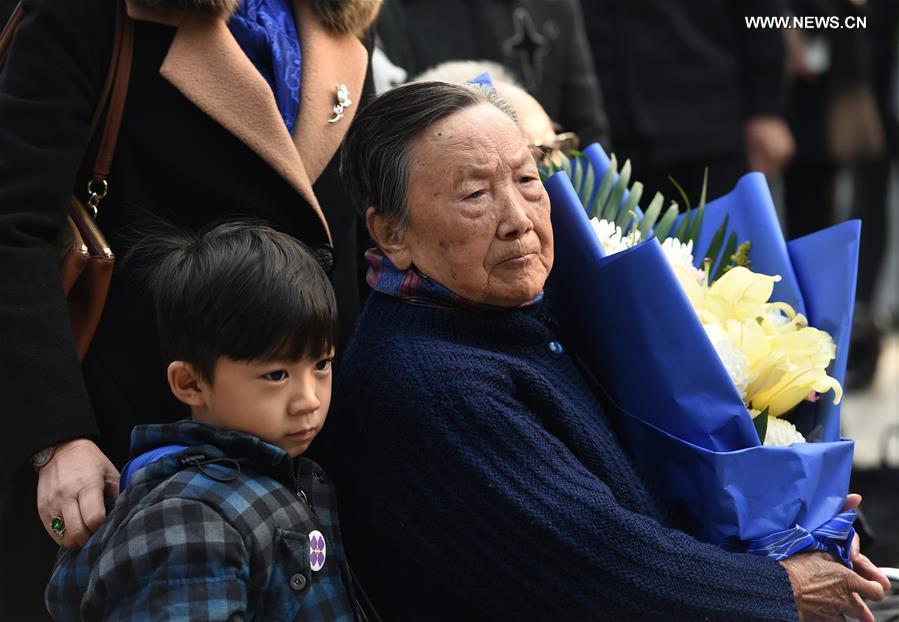 Xia Shuqin (R), a survivor of the Nanjing Massacre, and her family members mourn the victims at the Memorial Hall of the Victims in Nanjing Massacre by Japanese Invaders in Nanjing, capital of East China's Jiangsu province, Dec 3, 2016. (Photo: Xinhua)

More than 300,000 people were killed during six-week Nanjing Massacre

Once a year, Xia Shuqin stands in front of the "wailing wall" at the Memorial Hall of the Victims in Nanjing Massacre by Japanese Invaders in Nanjing, Jiangsu province, to mourn her beloved ones who died in the atrocity 83 years ago.

The 91-year-old lost seven members of her family in the massacre. Only she and her 8-year-old little sister survived.

The wall is engraved with the names of 10,665 victims.

The Nanjing Massacre began on Dec 13, 1937, when Japanese troops captured the then-capital city and killed more than 300,000 civilians and unarmed soldiers in the following six weeks. According to Chinese records, more than 20,000 women were raped.

"I don't know why I survived," Xia recalled. "I remember I laid among the dead after being stabbed. That's a scene that cannot be forgotten easily."

"I don't know how many years are left for me to go to the memorial hall to mourn my relatives," she said. "I'm too old. All I want is just to hear the apologies from the Japanese government, saying that it was sorry for killing my relatives."

With four massacre survivors dying this year, the number of survivors officially registered at the memorial hall had fallen to 73 by Friday. In 2017, there were still 100 survivors living in the country.

The memorial hall receives more than 8 million visitors every year, many of whom are from foreign countries. It started to hold the ceremony for the National Memorial Day for Nanjing Massacre Victims in 2014.

The hall has collected about 180,000 items in 35 years, including 4,000 pictures and 262 videos. It is now digitizing its collections to put them on the internet to share with more people.

Many activities have been held this year to commemorate National Memorial Day. At some subway stations in Nanjing, people can express their feelings on "peace wishing" boards.

Thousands of people had written on the boards by Friday, most expressing their hope for peace in the world. The boards will not be removed until Sunday.

Residents can also pay tribute to the victims at several mass grave sites in the city.

"We'll never forget the tragedy and we'll never forgive the massacre committed by the invaders," said Zhang Jianjun, curator of the memorial hall.

"Its history must be passed on to the young generation to better understand it and love peace from the bottom of their hearts."

The 2020 ceremony for the National Memorial Day for Nanjing Massacre Victims will be held at the memorial hall for the massacre victims on Sunday morning.