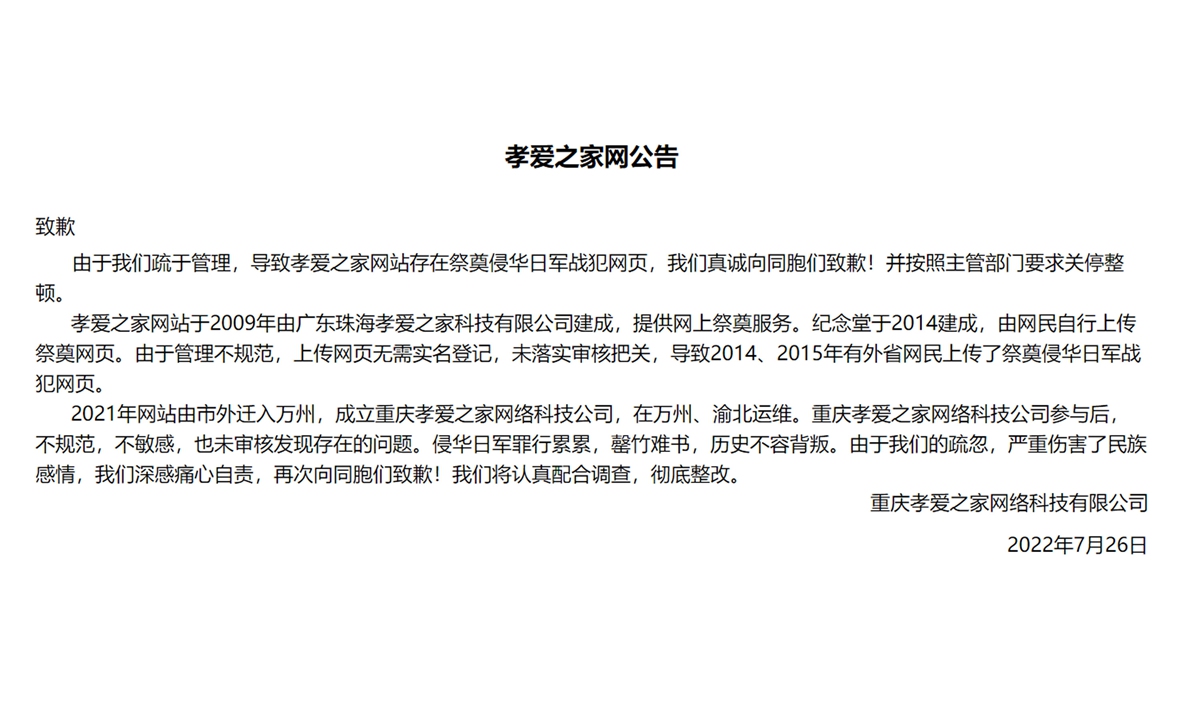 Photo: A screenshot of the notice released by Xiaoai Zhijia, an online memorial service platform in Southwest China's Chongqing on Wednesday

Xiaoai Zhijia, an online memorial service platform in Southwest China's Chongqing on Wednesday apologized for management failure that led to Japanese war criminals' memorial pages being posted on its website. The platform has suspended operations and will make thorough rectifications, the company said in a notice posted on its website on Wednesday.

An investigation launched by the local police and related departments is underway, Chongqing authorities announced on Wednesday.

It follows netizens' reporting which claimed that the online memorial service platform built memorial pages for Japanese war criminals including notorious Yasuji Okamura, commander-in-chief of Japanese troops in China, who signed the Instrument of Surrender in Nanjing.

According to a screenshot of the website page online, one of the Chinese characters of Yasuji Okamura was written wrong but the picture used on the online memorial hall was him, according to media reports.

The incident took place following China's religious affairs authorities demanded religious venues nationwide to launch emergency self-review and inspection, as the public outrages have been triggered over the incident that memorial tablets of Japanese war criminals were found in Xuanzang Temple in Nanjing, capital of East China's Jiangsu Province.

The Buddhist Association of China on Monday also required nationwide Buddhism venues to review the memorial tablets in their locations.

The association said in an announcement that there are some loopholes in the management of memorial tablets enshrined in some temples such as lack of check of the names and overly high charges.

The local authorities in Dalian, Northeast China's Liaoning Province, have carried out a thorough investigation in Hengshan Temple and didn't find the memorial tablets for Japanese Kwantung Army following a netizen's claims saying that the memorial tablets of Japanese Kwantung Army were shrined in the temple, Gaoxin district authorities in Dalian said on Wednesday.

The authorities will strengthen and improve the management of religious affairs in accordance with the law, said the local authorities.

In 2009, the website of Xiaoai Zhijia was established by Zhuhai Xiaoai Zhijia Science and Tech Co in South China's Guangdong Province, providing online memorial service. The memorial hall was built in 2014, and the memorial pages were uploaded by netizens themselves, according to the notice. The management of the website was transferred from Zhuhai to Chongqing in 2021.

Netizens didn't need to register their real names to upload the pages and the company didn't fulfill the management to review the information, causing the memorial pages of Japanese war criminals uploaded to the website in 2014 and 2015, said the company.

History can't be betrayed. As a result of our negligence, the incident has caused serious injury to national feelings, we are deeply saddened by self-reproach and apologized to our compatriots, the company said.