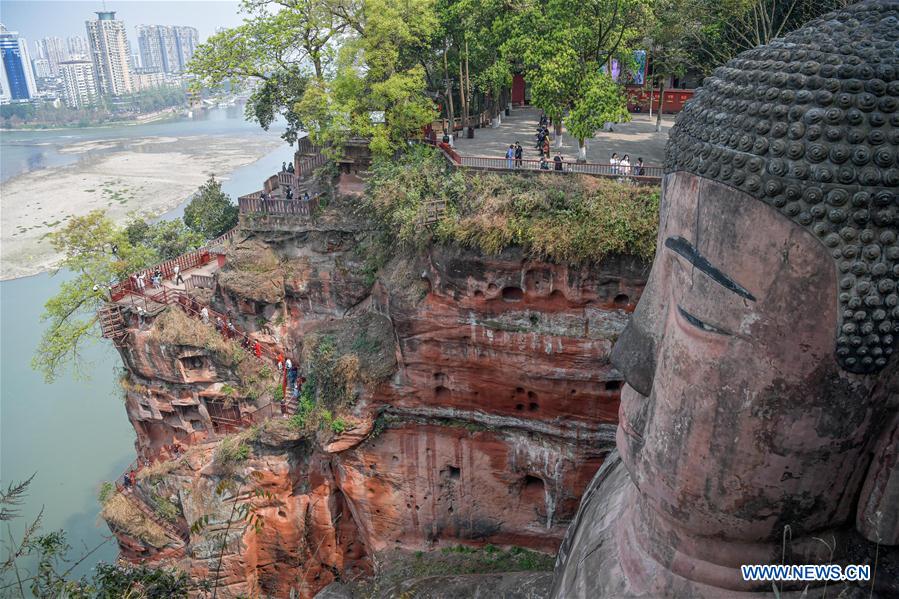 The Leshan Giant Buddha statue, a UNESCO heritage site, carved into a cliff in Leshan Mountain and overlooking three converging rivers, was built over a 90-year period starting in the year 713, during the Tang Dynasty (618-907). (Photo: Xinhua)

The water level in Leshan, Southwest China’s Sichuan province has dropped after the highest-level flood control response was activated on Tuesday for the first time.

The water levels of 22 major rivers in the province exceeded their flood warning levels by midday on Monday. More than 100,000 people in the hardest-hit Ya’an and Leshan cities have been evacuated.

Floods affected the Leshan Giant Buddha, a UNESCO world heritage site outside the city of Leshan. Floods reached the toes of the Buddha statue for the first time since the founding of the People's Republic of China in 1949.

On Monday night, local police and scenic spot staff placed sandbags on the platform under the Buddha's feet, building a dam-like structure to protect the statue. With the water levels of local rivers rapidly rising, flood waters had covered the toes of the statue at around 10 am Tuesday.

Floodwaters on the main roads in the Leshan urban area has subsided. The water level has dropped below the statue’s feet as of 8:30 am Wednesday.

The Sichuan provincial meteorological observatory said the main rain belt is leaving the province. However, rain-soaked areas are still prone to geological disasters such as landslides and mudslides.