The Zurich-based Neue Zürcher Zeitung (NZZ), in an article published online on Dec 28, has revealed how US corporate media used a double standard in their reporting about the Hong Kong protests.

The daily newspaper is one of the most influential German-language newspapers in the country, known for its high-quality journalism and objectivity on international news reporting.

Matthias Müller, the media outlet's Beijing-based reporter, made an analysis of The New York Times and CNN's coverage of protests in four areas across the world - Hong Kong, Ecuador, Haiti and Chile.

The article quoted a study by fair.org, a media watchdog organization based in New York City that found the two major US media outlets displayed a disproportional interest and distorted use of language in Hong Kong protests.

The study also noted that it was unwise to compare the numbers directly as those incidents in Latin America started far later than Hong Kong. But the disparity still remained enormous when analyzing the same period of time. The New York Times ran six stories and CNN three during the hottest moments of the Ecuador crisis (Oct 3 -14), in contrast to 33 and 38 articles, respectively, on Hong Kong over the same time period.

Since the beginning of the Chilean protests (Oct 14), The New York Times has covered the event 14 times and CNN 22, in comparison to 59 and 92 articles on Hong Kong, respectively.

The use of language also differentiates their reporting on things that could have been similar in nature. Hong Kong demonstrators were portrayed as "pro-democracy protesters" by the two media organizations despite violent acts of damaging property and infrastructure and setting a 70-year-old on fire by pouring flammable oil over him.

In contrast, the protests in Chile were denigrated as "riots" by CNN or "looting and arson" by The New York Times, according to the study. CNN also recognized the violence of the Ecuadorian protesters by saying "violent protests have raged for days in the Ecuadorian capital of Quito" in a Sept 19 story on its website. "This sort of language is rarely used with regards to the Hong Kong protesters, even when it is arguably more applicable," the study concluded.

In another example of how Times reporting "glossed over" Hong Kong demonstrators, the study noticed how the Times described protesters shooting an arrow into a police officer's leg. It used passive voice: "A police officer was hit in his leg with an arrow" as "activists resisted" the police onslaught to "suppress them", while in this case accurate and objective reporting should be in active voice by clearly saying who did what.

The study also questioned CNN after noting the news outlet published an image of a homemade gas canister-sized bomb on Nov 17, similar to the one used in the Boston Marathon terror attack. 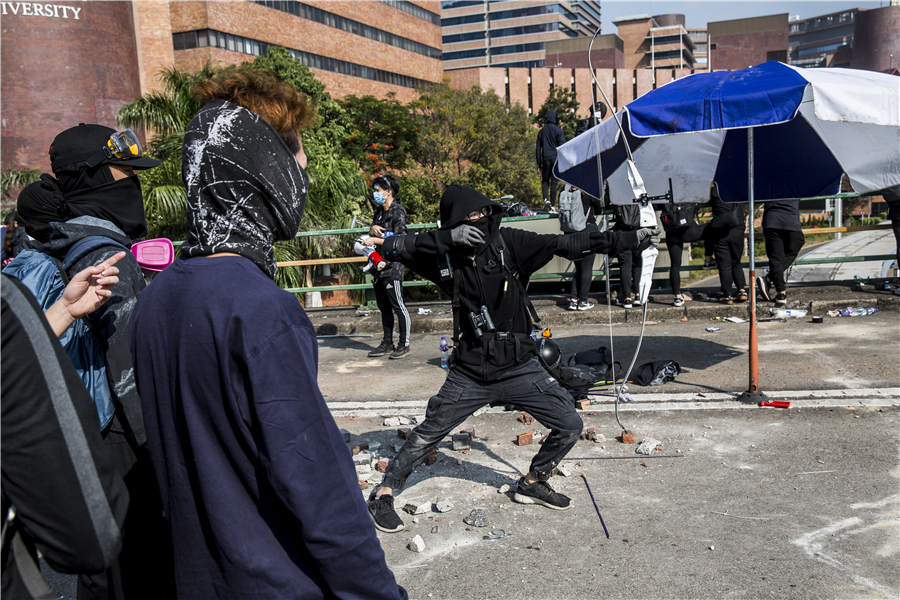 A rioter unleashes an arrow while standing on a barricaded street outside the Hong Kong Polytechnic University, on Nov 15, 2019. (Photo: Agencies)

"If, for instance, Black Lives Matter or Antifa had killed passersby, shot police or created Tsarnaev-style bombs, would they be called 'pro-democracy demonstrators,' as both CNN (11/22/19) and The New York Times (11/22/19) have continued to do for those in Hong Kong?" asked the study.

By combing through The New York Times and CNN's monthslong reporting, the study concluded that corporate media has "glossed over many of the more unseemly details of the Hong Kong protests".

The analysis piece on the NZZ website also noted that the situation surrounding the Hong Kong reporting by US media was "poisoned" and "one-sided".