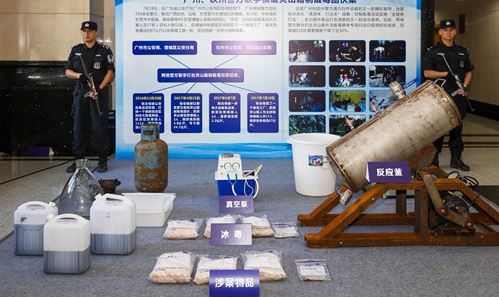 Police exhibit the drug-making equipment they have confiscated. (Photo: VCG)

Police from Guangdong Province and Guangxi Zhuang Autonomous Region encircle a drug-making factory in a rural village in Guangdong on July 18, 2017. Photo: VCG

The moment a drug enforcement officer surnamed He drove past an Audi on the streets of Yingshan county, Hebei Province, he immediately noted that the driver seemed "unusual."He recognized the driver surnamed Ye from long before. Ye had years of history as a drug abuser. His greasy hair, acne on his cheeks and tired eyes in He's judgment clearly showed Ye had relapsed. So He asked the driver to pull over, and a urine test confirmed He's intuition.Ye is one of the many drug addicts that He has dealt with over the years. Founded seven years ago, the Yingshan County Police Anti-drug Brigade has cracked down on more than 100 drug-related crimes, including one case involving more than 100 criminals. In contrast to this number is the county's small population of 400,000, jiemian.com reported.Yingshan county is a miniature of China's current situation. It's reported that drug-related crimes have spread from coastal and developed cities to inland, lower-tier cities, villages and counties. The 2017 National Drug Control Situation report revealed that farmers have become the second largest group of drug users in China. It also showed that in 2017 alone, Central China's Hubei Province has ruled on 9,000 cases involving drugs. Recreational drug use is not a "malignant tumor" peculiar to developed areas. In many poor mountainous areas, "secret warfare" is being conducted to fight this problem.

Drugs and povertyYingshan county occupies 1,449 square kilometers, with 309 villages, dominated by a small-scale peasant economy. It has for many years been on the national list of impoverished areas. In 2016, the per capita annual income was barely 13,772 yuan ($2,000). While the locals once lived an isolated life, the completion of a highway between Yingshan and Wuhan, Hubei's capital, in 2009 broke their solitude. After that, the communication between local people and outside society became more frequent, and some locals making money in big cities brought drugs back to this little town. At that time, methamphetamine spread quickly through illegal gambling houses and game rooms. Ye was jobless at the time and took the drug to stay awake while gambling.To combat the drug, on August 14, 2014, Yingshan police conducted a large-scale raid and arrested several addicts at an entertainment club. Yingshan police later found out that the drugs addicts like Ye bought were from a man surnamed Jin who lived in Huanggang, which is on the Yangtze River. Local police then tried to track and collect evidence from Jin, but with little luck, as the man chose to stay low-key. The amount of methamphetamine in the underground market soared at that time. The police later found out that another man surnamed Guo was the behind-the-scenes kingpin of the drug market. It took police 28 months to break up the drug gang. In the end, they arrested six people and confiscated 24.17 kilograms of methamphetamine, jiemian.com reported. Yingshan county's drug problem represents the general trend of more farmers getting involved in drugs. In 2015, police in China arrested 194,000 suspects in drug cases. Some 78.9 percent of this number were farmers and unemployed people, according to The Beijing News. China National Radio reported that the cultural life in rural villages is comparatively poor - there is not much to do. As mobility between cities and villages increased, drug addicts and criminal gangs noticed that the bored villagers were an easy market to exploit. As some villagers got more spending money, they became a ready target.

Mountain factoriesDrug crime in impoverished villages soon escalated, as some criminals, lured by profits, started to manufacture their own drugs.Liu Yuejin, deputy director of the China National Narcotics Control Commission, told The Being News that in recent years drugs are being made in rural places and brought into cities. In a quiet village on the border of Hubei and Anhui provinces, a lane of ramshackle houses is hidden in a bamboo forest. For drug makers, this was a golden venue for a drug factory. It was far from urban areas. The forest was a natural cover for the pungent odor during drug manufacturing. Surrounded by mountains, there was only one entrance, making it easy for the factory owner to monitor who was coming and going.In October 2017, police in Huanggang received tips that someone was making drugs in the area. After nearly a month's investigation, they located the factory in Daqi township.Police raided the factory and found over 120 million yuan worth of ketamine, a club drug. In addition, they found over 100 containers of various sizes and large amounts of chemicals and equipment used to make drugs.This January, police in Qichun county, Hubei Province, raided a drug factory and found 9.1 tons of drugs and 49 tons of raw materials.The factory started manufacturing methcathinone, a synthetic drug often sold as "bath salts," on January 10, and by the time the police busted the factory on January 20, it has already manufactured 9.1 tons of the drug."This is almost crazy," a policeman who participated in the case told thepaper.cn. The machines were kept running 24 hours a day, and police spotted a large amount of eye drops in the dorms, as the workers' eyes were irritated by the chemicals and the long working hours. Apart from the eye drops, cartons of packaged bread were found in the dorm so the workers did not have to leave to eat.Police eventually arrested 15 suspects, mostly from Fujian Province, one of China's major drug centers.

Mature supply chainFrom drug use to drug transportation and eventually to drug manufacturing, in just a few years, a mature supply chain has emerged in Hubei Province, an economically underdeveloped area.He and his colleagues attribute the spread of drug abuse to two main reasons. One is the relatively low prices of synthetic drugs, making them affordable for more people."As the entry barrier for manufacturing synthetic drugs drops, the market share of methamphetamine-based drugs such as crystal meth and magu (a mixture of methamphetamine and caffeine) has grown enormously. The increase in supply in turn lowered their prices," he told jiemian.com.Among drug users in China's compulsory drug rehabilitation centers, 70 percent are addicted to synthetic drugs, according to Cao Xuejun, head of the detox administration under the Ministry of Justice. He said most of the drug addicts he arrests are laborers such as painters and truck drivers."Many of them made some money as migrant workers, but after getting into the habit of drug abuse, their families broke up," he said.The improvement of transportation infrastructure and the increased mobility of people also made it easier for drugs to enter new areas.Nationwide, drug addiction has also expanded to underdeveloped areas and people earning lower incomes.According to a 2018 report by the China National Narcotic Control Commission, there were 2.55 million drug users nationwide at the end of 2017, and more than 1.5 million of them were synthetic drug abusers. According to 2015 statistics, among drug users, 69.5 percent have no stable jobs, 17.3 percent are farmers and 4.7 percent are urban workers.He said fighting drug crimes in towns and counties will never be a simple war, but a long back-and-forth battle.Apart from major drug crime, his job also involves patrolling the streets and preventing drug use in public venues such as hotels and clubs. "If there are fewer drug users, there will be fewer drug traffickers," he said.In some places, the crackdown has already taken effect. In Yingshan county, Jiang Chen (pseudonym), head of the anti-drug team, said the number of drug users in the county has dropped over the years. "Drug traffickers no longer dare to come, and there are no longer local drug traffickers," he told jiemian.com.