KUNMING, May 26 (Xinhua) -- Before Yu Songsong started to learn yoga, he knew little about India, where the practice originated. 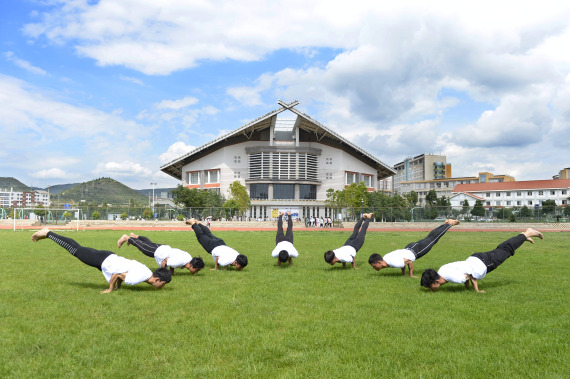 Having spent the last six years learning yoga disciplines, he is enamored by the yoga culture and eager to travel to India.

In 2013, Yu from a rural area in Guizhou fell ill ahead of an examination to enter university. He ended up studying marketing at a local college of finance not far from his home.

"I don't like marketing at all, and I was suffering from an emotional disorder, almost depression. I received medical treatment but did not get my mind and body right," said the 25-year-old who is pursuing a master's degree in the China-India yoga college in Yunnan Minzu University in Kunming, capital of southwest China's Yunnan Province.

"It was yoga that turned me around. I was no longer lost. I've found a direction for my life," Yu said.

He started to practice yoga when he was a freshman and became a vegetarian. "The physical and mental practices relieved me of psychological distress," he said.

Yu participated in a national fitness yoga competition and studied hard for an admission test to enter the master's program in the yoga college.

Through yoga, Yu is deepening a comparative study in the philosophies of China and India, two great civilizations in Asia.

"In the class, we discuss and compare the traditional Chinese theory that 'man is an integral part of nature' and the Indian idea that 'the Buddhist and I are one.' Through this, we explore the similarities that underly the culture and civilizations of the two countries," he said.

Yu is learning from his Indian teacher Yatendra Dutt Amoli, and his teacher is studying Taiji from Chinese masters and students after class.

"I'm trying to teach them Indian culture from the Chinese way of looking at nature and values," Amoli said.

"Both Chinese and Indian civilizations were born by nature, and we always try to find ways to connect human beings with mountains, rivers, forests and lakes in the class," Amoli said.

For example, Taiji and yoga stress the elemental nature of the being and their performances reflect the balance between the elements of human being with nature, he said.

In Amoli's opinion, though the ways to practice Taiji and yoga may differ, the fundamentals are similar.

"In this sense, the two practices from the world's ancient civilizations value human life in the same way. This is the best medium for us to communicate with each other as we share the same levels of understanding," he said.

As an ancient Chinese martial art, Taiji can establish a good base for yoga meditation and enhance one's awareness level, which will be helpful for yoga, Amoli said.

At the beginning of 2018, two sub-centers of the China-India Taiji college of Yunnan Minzu University were established in India and have trained about 1,000 Indians.

"But many Chinese and Indian youths still know little about each other," he said.

"They consider yoga and Taiji merely as two physical exercises rather than two cultures, so we need to do more to deepen mutual learning and friendship," he said.