Taikonauts who have lived and worked in China's Tianhe space station core module for over two months are set to undertake the second round of extravehicular activity (EVA), commonly known as a spacewalk, in the near future, the Global Times has learned from the country's manned space authorities. 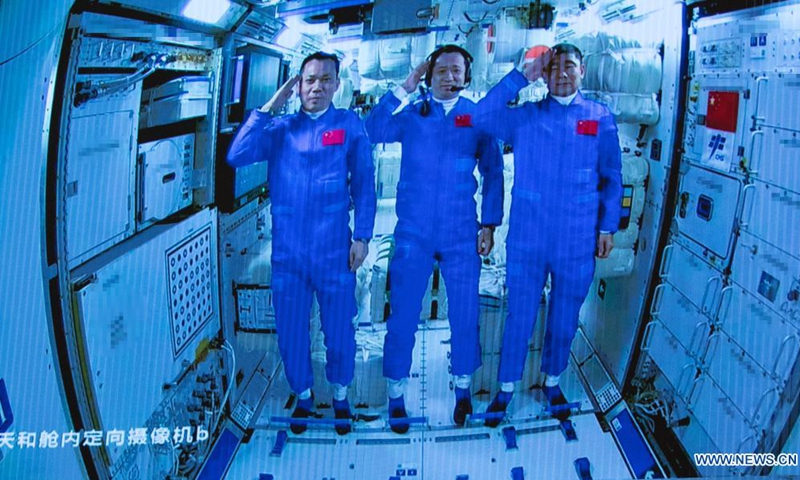 Chinese space experts expressed high confidence in the success of the 2nd extravehicular mission of the Shenzhou-12 crew, while anticipating that taikonauts will explore optimized and more efficient ways to carry out EVA, so as to lay a foundation for similar missions from China's space station.

The crew has successfully carried out tasks including transferring supplies from the cargo spacecraft to the core module and comprehensive management of the Tianhe core module complex, during a two-month stay in the orbiting module, according to a press release by the China Manned Space Agency (CMSA.)

Taikonauts Liu Boming and Tang Hongbo conducted the first Chinese space station spacewalk mission on July 4, while the Shenzhou-12 mission commander Nie Haisheng stayed inside. He operated systems onboard, including the smart robotic arm, to help and support the two spacewalking taikonauts. The first spacewalk lasted about seven hours.

In video footage newly released by the state broadcaster China Central Television (CCTV), the Shenzhou-12 taikonauts have undergone a week of in-orbit training for the second spacewalk. On Monday, the crew and the ground astronaut support system jointly carried out a full-procedure spacewalk rehearsal, to ensure the smooth execution of the mission.

According to CCTV, there was a change in the personnel who will come out of the cabin from the first spacewalk, and therefore the crew has adjusted the size of the spacesuits, altered the gloves, and replenished the consumables.

The CMSA has yet to disclose the exact lineup to come out of the cabin. A mission insider who requested anonymity revealed to the Global Times on Wednesday that Nie is expected to replace Tang.

Apart from verifying the flexibility and reliability of the spacesuits, a change of the outside mission rosters would also enable all three Shenzhou-12 taikonauts to have actual EVA experience, which will lay the ground for other space station missions, Wang Ya'nan, chief editor of Aerospace Knowledge magazine, told the Global Times on Wednesday.

"There is little doubt on the success of the mission," Wang said, while anticipating that the upcoming spacewalk mission could be shorter than the first one, as the second one will explore ways to optimize the process with better efficiency.

The crew will examine the spacesuits' liquid, gas and electric circuits, and also the communication systems, and ensure they all function well before getting down to the actual mission, said Wu Dawei, deputy chief designer of the Chinese astronauts' system.

Those who are assigned to conduct the spacewalk will do cardiopulmonary exercises and take routine urine tests, to ensure they are in good physical condition during the mission, CCTV said.

The Shenzhou-12 crew is in good shape and the core module complex is running stably, which constitutes the pre-conditions for the next spacewalk, said the CMSA in the press release.

China's space station is expected to become fully operational by 2022. When completed, the space station will be able to operate in orbit for at least 10 years, which could be extended to 15 years under proper maintenance, mission designers told the Global Times.