TAIPEI, March 15 (Xinhua) - The total number of novel coronavirus disease (COVID-19) cases in Taiwan has increased by six to 59, according to the island's epidemic monitoring agency Sunday. 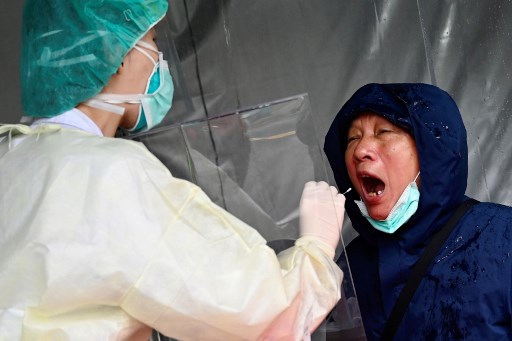 A medical staff collects a sample for testing during a drill organised by the New Taipei City government to prevent the spread of the COVID-19 coronavirus, in Xindian district on March 14, 2020. (Photo: AFP)

All of the six new patients had traveled outside Taiwan recently and were believed to have contracted the virus during their trips, the agency said in a statement.

A man in his 30s had traveled to Thailand and Japan from Feb. 28 to March 8 and has had a running nose, fatigue and headache since March 11, while another man in his 50s had been to Egypt from March 3 to 12 and developed a fever and muscle ache after returning to Taiwan, according to the statement.

A man in his 40s and a woman in her 70s had visited Turkey together from March 4 to 13 and had symptoms such as throat irritation, diarrhea and fever after returning to Taiwan.

Among the island's confirmed COVID-19 cases, 32 were imported. Twenty of the confirmed patients have recovered and one died of the disease. The rest are in stable condition.