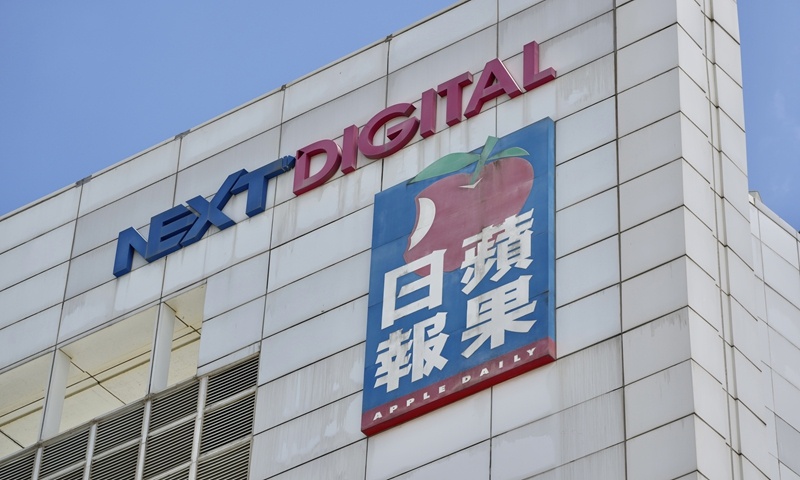 Next Digital Ltd and Apple Daily logos are display at the headquarters in Hong Kong, June 17, 2021. (Photo: VCG)

Next Digital in Hong Kong said that it will most likely sell the asset of Taiwan Apple Daily, with a final transaction agreement is expected to be signed before July 30, according to a statement released by Next Digital to the Hong Kong Stock Exchange (HKEX) on Tuesday.

Analysts said the sale of the asset appears to be "rushed", which could be a "life-saver" for Next Digital after the company's shares have been suspended trading on HKEX and a total of HK$18 million ($2.3 million) in assets was frozen by local authorities.

Next Digital has accepted a non-legally binding proposal made under a letter of intent entered into with a potential purchaser regarding a possible disposal of Amazing Sino International Limited. Amazing Sino and its subsidiaries publish the online edition of Taiwan Apple Daily, read the statement.

An acquisition deal is likely to be signed with the undisclosed buyer before July 30, 2021, according to Next Digital.

"It seems to be rushed. It is incredible to complete a transaction deal within a month. The only explanation is that Next Digital is rushing to resolve its capital inflow problem, as the Hong Kong Apple Daily has shut down due to lack of funds for normal operations," an investor based in Shanghai, who declined to be named, told the Global Times on Wednesday.

"It is unclear at what price Next Digital will sell its Taiwan businesses. But the price is presumably not very high," the investor said.