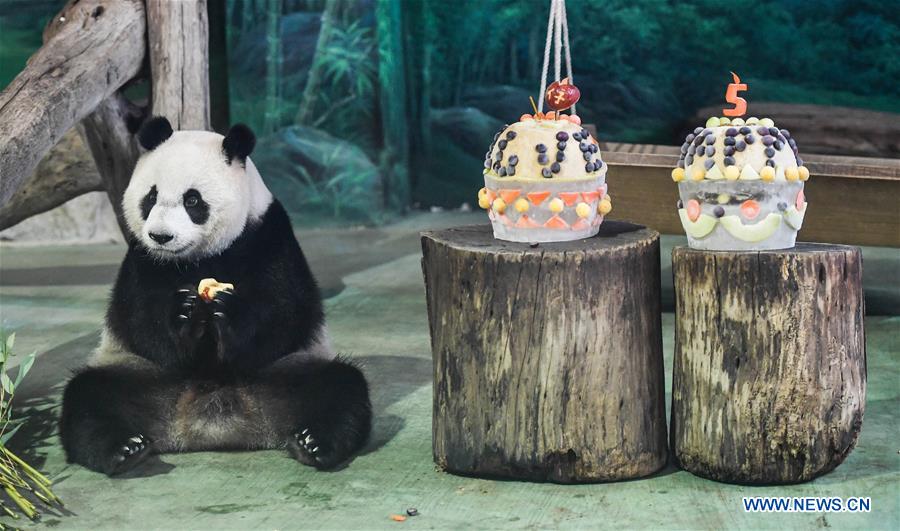 It's not a celebrity's meet-and-greet session at a concert, but rather the birthday bash of a giant panda in Taiwan.

On Friday, giant panda "Yuanzai" celebrated its fifth birthday at the Taipei Zoo, drawing large crowds eager to catch a glimpse of the chubby bear.

The animal showed up at the zoo's Giant Panda House around 9:20 a.m., and fans immediately used their phones to record every move of the cute animal. It played around, and at one point, climbed up a platform and started to play with the posters on the ceiling, generating quite a buzz among the visitors.

"It is so cute!" said a visitor surnamed Chung. "I came here early to see Yuanzai."

Yuanzai is the baby of two giant pandas, Tuantuan and Yuanyuan, sent to Taiwan from the Chinese mainland in 2008. The female, Yuanyuan, gave birth to Yuanzai in 2013.

"I have been following the pandas' news since they arrived in Taiwan," Chung said." We even formed a fanclub on Facebook, which updates everything about the pandas."

Another visitor surnamed Li brought his daughter to the zoo to see Yuanzai.

"We heard in newspapers and on TV about Yuanzai's birthday," Li said. "My daughter adores pandas."

Wang Yi-min, with Taipei Zoo, said they frequently invited experts from the mainland to help with the protection and insemination of the pandas.

"It is an honor to be part of the protection efforts of giant pandas," she said. "We hope to have more cooperation with experts from the mainland to help protect the animals."