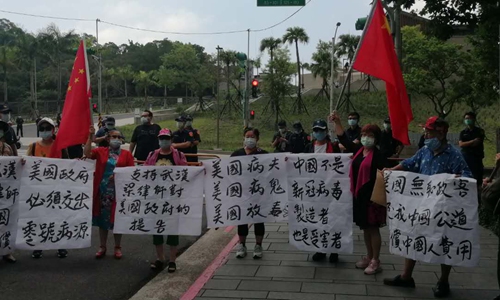 Taiwan residents protest against the US with banners on Thursday. (Photo: Global Times)

A group of Taiwan compatriots protested against the US for slamming China on the novel coronavirus and its groundless accusation of the Chinese government’s mishandling of the COVID-19, as they gathered at the American Institute in Taiwan to announce their condemnation on Thursday.
Initiated by the Taipei-based Chinese Patriotic Concentric Association, a group of Taiwan residents declared their support to Wuhan lawyer Liang Xuguang who filed a lawsuit against the US over its slander towards China and its opaque handling of the coronavirus cases in the earlier days of the outbreak.
The group denounced the US “China-bashing” campaign as a lame trick by some politicians, with some banners reading, “China is never producer of the virus but rather a victim of it” or “Unscrupulous US politicians owe China an apology and should return China justice.”
They delivered the legal complaint drafted by Wuhan-based lawyer Liang Xuguang, who urged the US to stop spreading misinformation and to publicize the number of “influenza deaths” caused by novel coronavirus in the earlier days, to the American Institute in Taiwan.
“We refute the US’ political attempts to cast blame on China and to smear the Chinese people,” said Zhang Xiuye, a participator of the protest. “Today's China is no longer the weak one 100 years ago, whereas the US is no longer the one in its heyday. We urge US politicians not to bully the Chinese with their hegemonic mentality.”
“The virus origin is a scientific issue that the US politicians should not overly meddle in. Trump is an incompetent ruler who has only the ability to instigate conflicts and scapegoat others for his own inability to control the outbreak, but never has the ability to give any effective measures amid the severe epidemic condition,” she added.
“Trump fantasizes himself as the savior of Taiwan island. In fact, any wise Taiwan compatriot is aware that the US does not really take Taiwan’s interests into consideration but utilizes the island only as a political tool. It is the right time for the US to get out of the land,” Chou Ching-Chuen, the president of Chinese Patriotic Concentric Association, told the Global Times on Thursday.