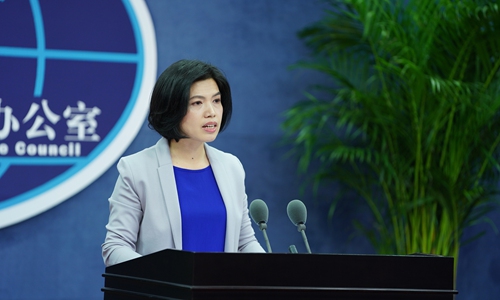 "It is clear that 'fraudster turns spy' is an absurd and flawed 'script' written by anti-China forces," Zhu Fenglian, spokesperson of China's Taiwan Affairs Office of State Council said at a press conference on Wednesday. Shanghai police earlier said Wang is an ex-con who spent time in prison for fraud and is wanted in connection with another fraud case in the city.

The Democratic Progressive Party (DPP) in Taiwan is using Wang's fraudulent confession to create the illusion that "the mainland is involved in the elections in Taiwan," Zhu said.

Zhu noted that many Taiwan people doubt the claims made by DPP authorities, and believe Wang's false confession is being used by the DPP as an election trick.

On Saturday, The Sydney Morning Herald reported that Wang had "defected" to Australia. The newspaper said Wang was ordered to "shift his attention from a covert operation to undermine Hong Kong's democracy movement and focus instead on meddling in Taiwan's 2020 elections."

However, Shanghai police said on Sina Weibo Saturday that Wang is wanted for involvement in a fraud case involving 4.6 million yuan ($653,000). He was previously sentenced to 15 months in prison in 2016 for fraud.

Wang left for Hong Kong on April 10, the police said, noting that his Chinese passport and Hong Kong permanent resident identity documents were forged. He is said to be 26 years old and from Nanping, East China's Fujian Province and his wife and child live in Australia.

The Australian report said Wang is a very senior and important intelligence officer.

"How could a 26-year-old man with a wife and son living in Australia be [a spy]," Li Haidong, a professor at the China Foreign Affairs University's Institute of International Relations, told the Global Times.

The only explanation is that Wang is now conning the Australian government into believing he is a spy in order to get political asylum, Li said.