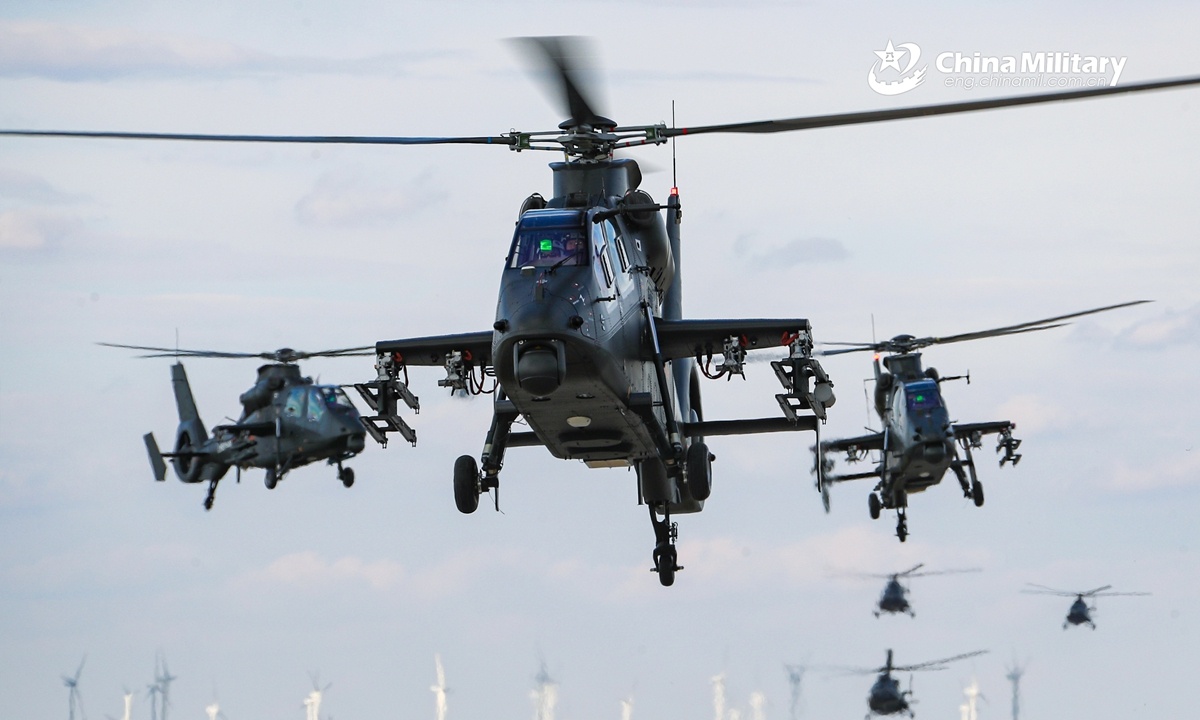 A cluster of attack helicopters attached to a brigade under the PLA 81st Group Army lift off successively and fly to a predetermined operational area at ultra-low attitude during a live-fire combat training exercise on July 28, 2021.(Photo: China Military)

The defense authority on the island of Taiwan is reportedly proposing a huge special budget for missile manufacturing capabilities with the aim of "coping with threats from the Chinese mainland" amid the fear that the US would give up the island as it did with Afghanistan.

Despite the budget, the island lacks the technologies needed to develop advanced missiles that can change the power balance across the Taiwan Straits, and the budget will backfire as the missiles will become priority targets of the Chinese People's Liberation Army (PLA), Chinese mainland military experts said on Sunday.

It is hoped that the institute can use the funds to expedite the mass production of missiles with precision and long-range capabilities, the report quoted the source as saying.

The special budget is proposed to "deal with threats from" the Chinese mainland, Taipei-based newspaper the Liberty Times reported on Sunday.

Citing analysts on the island, the Liberty Times said that the island of Taiwan could become an unsinkable aegis ship equipped with all types of missiles. The missiles could be used to hit key locations in the Chinese mainland if the PLA launches an attack on the island, and this could disrupt a PLA attack, the report claimed, noting missiles are more cost-efficient than warplanes.

However, Chinese mainland military experts said that this is just another futile attempt by Taiwan secessionists to resist reunification by force.

With the Chinese mainland in mind, the island of Taiwan has been developing missiles for a while, but its technologies are not sufficient to develop advanced missiles that are meaningful enough to change the military power balance between the mainland and the island, Song Zhongping, a Chinese mainland military expert and TV commentator, told the Global Times on Sunday.

For the armed forces on the island, this will only draw fire onto themselves, because the missiles will very likely become the first targets the PLA attacks if a conflict breaks out, Song said.

No matter what kinds of weapons and equipment the island develops, they will not be enough to change the power balance status quo, Song said.

Experts said that the PLA will make use of the new missiles, along with all the other missiles it has at its disposal in a potential conflict across the Taiwan Straits, and the island, even reinforced by foreign forces, has no chance of winning this missile fight in both quality and quantity terms.

On Tuesday, the PLA Eastern Theater Command dispatched warships, anti-submarine warfare aircraft and fighter jets in maritime and aerial areas near the southwest and southeast directions of the Taiwan island for military drills including joint live-fire assaults.

The PLA's exercises took place right after the Taliban took control of Afghanistan following the US' troop withdrawal, and this would be a strong shock to Taiwan secessionists who are now weighing the reliability of the US, observers said, noting that the special missile budget reflects their fear.