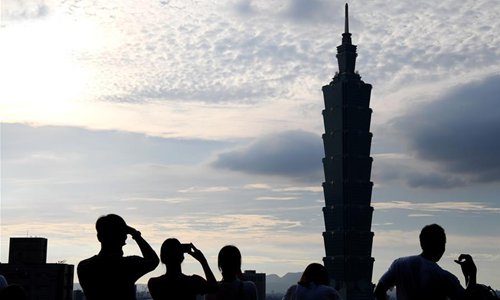 After the suspension of individual tourists and retreat from  film festival, experts warned of possible following measures in economic cooperation by the Chinese mainland if the cross-Straits relations continue to worsen, which will inflict a heavy loss on the Taiwan economy.

To terminate the Economic Cooperation Framework Agreement would be the deadliest  measure to hit Taiwan as the number of exits to the mainland accounts for about 40 percent of the island's total, Xu Guangyu, a senior consultant at the China Arms Control and Disarmament Association, told the Global Times on Thursday.

But the mainland would be cautious to make this move as it is too devastating to the island, Xu noted.

Once suspended, Taiwan will suffer lost revenue worth hundreds of billions of dollars a year from the mainland, warned Tang Shaocheng, a senior researcher at National Chengchi University in Taiwan.

The mainland imported Taiwan goods worth $178 billion in 2018, a year-on-year increase of 13.9 percent, according to China's Ministry of Commerce.

But the investment environment in Taiwan has worsened after current leader Tsai Ing-wen took office, according to a white paper from the Taiwan Federation of Industries released in May.

The Taiwan government approved 56 mainland-invested projects to the island in the first five months, valued at $28.2 million, a year-on-year drop of 74.2 percent, according to the chinanews.com.

The mainland-based Association for Tourism Exchange across the Taiwan Straits suspended  the trial run of a scheme under which residents from 47 mainland cities can visit Taiwan as individual tourists starting August.

The ban will cause an estimated loss of 76 billion new Taiwan dollar ($2.4 billion) to the Taiwan tourism business in the second half of the year, people.cn reported.

One week after the suspension, the China Film Administration announced a ban on Chinese mainland movies and artists from participating in November's 56th Golden Horse Film Festival in Taiwan.

These measures are responses to Taiwan's recent moves, including the military purchase with the US and joining protests in the Hong Kong Special Administrative Region, said Jin Yi, an expert at the Institute of Taiwan Studies of the Beijing-based Chinese Academy of Social Sciences.

The mainland has showed goodwill to the island but the Taiwan government kept going its own way, which damaged cross-Straits relations and Taiwan development, analysts said, noting that Taiwan leader Tsai Ing-wen is responsible for the current situation due to her hostile policies to the mainland.

The island is also encountering a step back in interaction with their civil partners in the mainland in various fields.

"It's definitely going to make a difference. Our new shows are very likely not to include entertainers from the island of Taiwan," a staff of Chinese entertainment company MeWe told the Global Times on Thursday on the condition of anonymity.

Some colleges in Beijing are also holding back interactions with Taiwan partners, according to students reached by the Global Times.