Sun Moon Lake, an iconic tourist spot in Taiwan is turning into barren wasteland as the island is experiencing its worst water shortage crisis in 56 years due to months of scant rainfall last year. 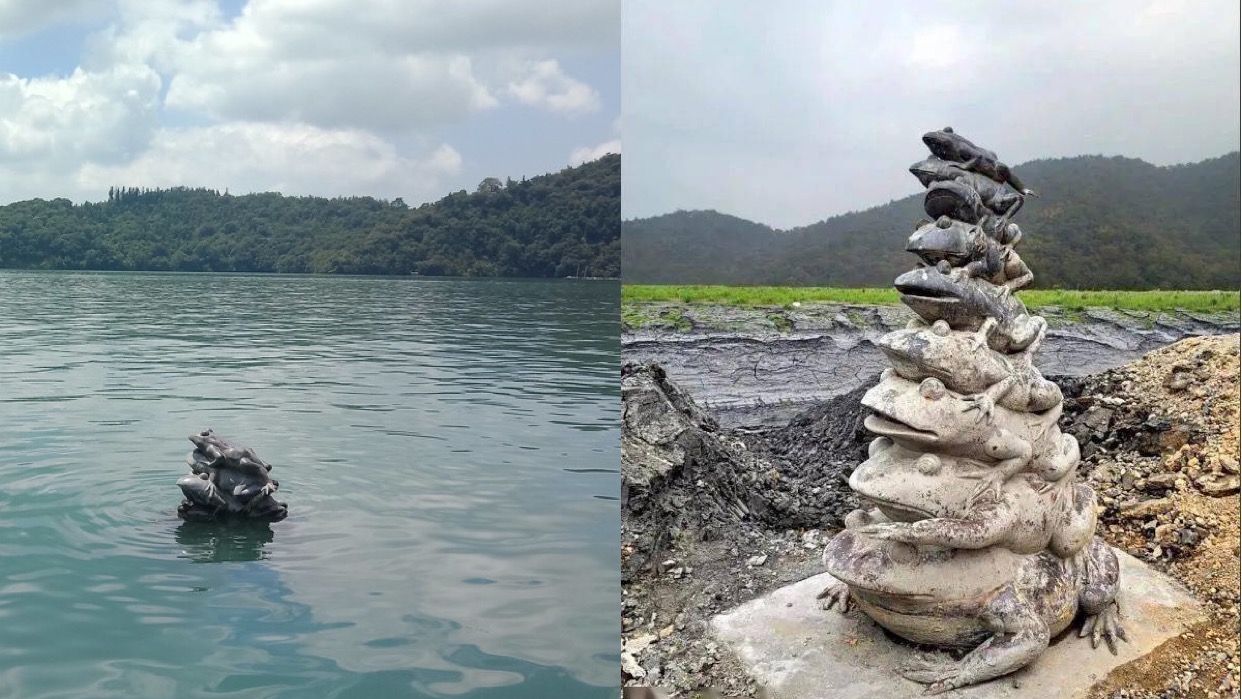 A stitched photo of the nine-stacked-frogs statue in Sun Moon Lake before and during the drought. /CFP

As the largest natural freshwater lake on the island, the water level of the lake has plunged by 12 meters, hitting a record low with some parts of the lake drying up completely. Netizens have been drawn to the drastically altered landscape, posting photos with densely bold cracks seen on the lakebed, with captions such as "Sailing on Land" and the "Sun Mook Lake Prairie."

The management department of the lake has closed the park since April 1 due to safety concerns.

This is the worst drought Taiwan is facing in half a century and the reservoirs in central and southern Taiwan have nearly bottomed out. If the current drought continues, major water supply reservoirs in the island will only have enough water to last two more months, according to Taiwan officials.

If Plum Rains are unable to replenish reservoirs in central Taiwan, a red alert will have to be issued in May, according to local reports. 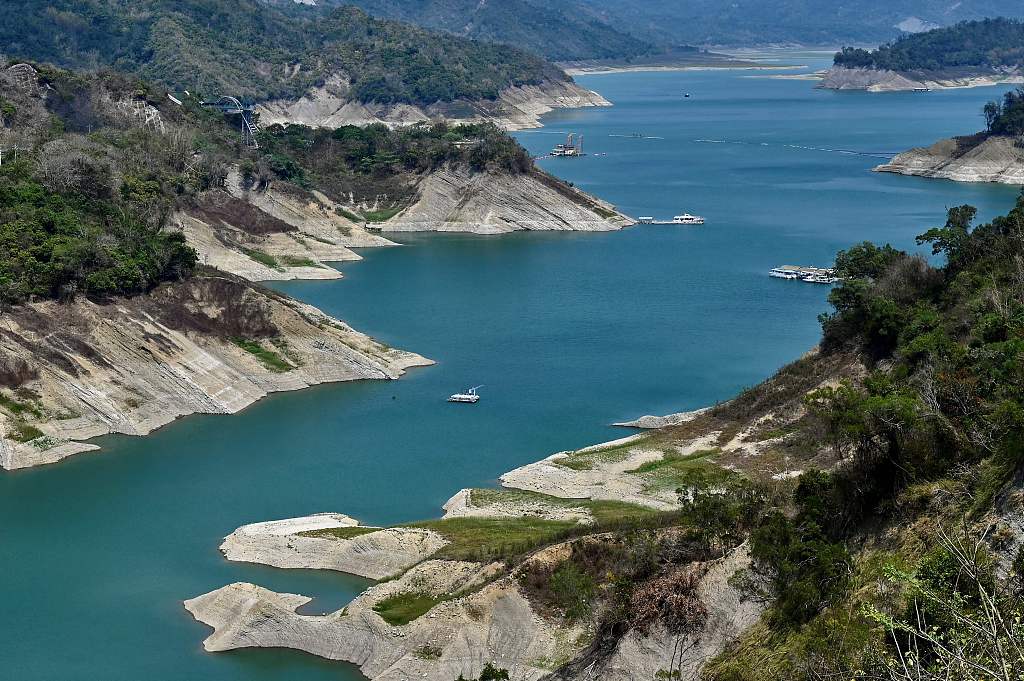 Local newspapers reported that large water buckets are selling out and due to water-saving measures, many people have rushed to buy waterless clothes, clothes that can go weeks without being washed. Meanwhile, beauty salons and restaurants have said they simply can't get enough water to meet their business needs as water trucks in the region are busy transporting industrial water to big tech companies that consume large amounts of water.

The island has stepped up nationwide water restrictions and some areas of Taichung, Miaoli, and Changhua have been subjected to a suspension of water supply two days per week on a rotational basis, affecting about one million people.

In response, Tsai Ing-wen, the regional leader of Taiwan, has called on residents to conserve water and set up an emergency response center to deal with the water shortage. But she was criticized for ignoring the warning of meteorologists who alerted the authority months ago that the island would face severe water shortage in the spring.

The ruling Democratic Progressive Party (DPP) is also under attack due to their approaches to drought alleviation. For example, the irrigation department joined with a famous temple to pray to Mazu, the sea goddess, for rainfall. And the economic affairs department allowed companies to drill emergency wells in a technology hub to increase their water supply.

Both of the methods were criticized as "unscientific" as some warned the drilling could cause land subsidence or damage manufacturing equipment in the park and some doubted that groundwater levels are likely lower than usual due to the drought. 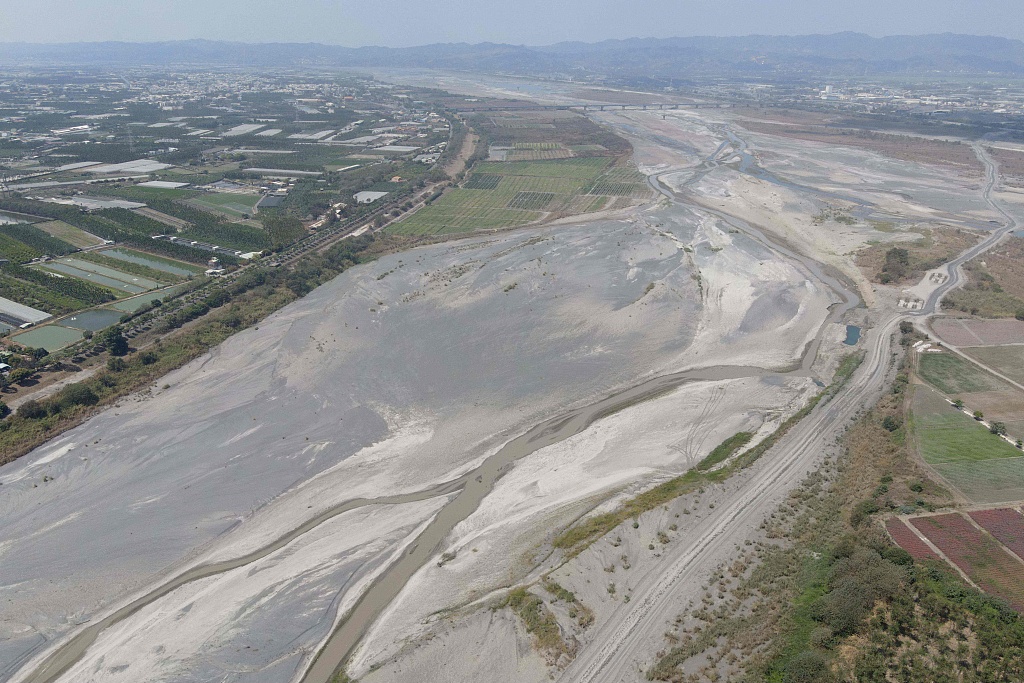 November to April is usually the dry season of the island. After entering the dry season, the central and southern parts of Taiwan, confined by its terrain, have little rainfall. If the region doesn't get enough water in the rainy season, drought is likely to occur. Last year, due to the short period of Plum Rains and the absence of typhoons, the rainfall on the island was scarce.

But experts believe human reasons are also to be blamed. For example, streams on the island are short and fast, and if the water is not properly stored in reservoirs, a water shortage crisis will occur in the dry season. In Taiwan, there is a serious problem of reservoir sediments, and the water leakage rate is high due to various factors like urban constructions, earthquakes, overloading of traffic vehicles and obsolete pipelines.

The problems have existed for many years, and many believe the regional authority failed to devise measures to prepare the island for droughts and lacks long-term planning for the utilization of water resources.

Lee Hong-yuan, a Taiwan water expert, told reporters that "Taiwan has no right to lack water" as the annual rainfall of the island is 2.6 times the world average.

He believes that the root cause of the water shortage is the extreme waste of water resources and ignorance of water recycling. He said that the agriculture industry uses 70 percent of Taiwan's water, but for long time water on the island has been delivered through old irrigation channels, which causes half of the water to leak and a quarter to evaporate during transportation, meaning only 25 percent of the water reaches the fields.