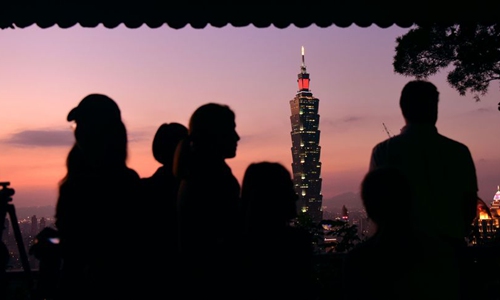 The island of Taiwan's epidemic control efforts against the novel coronavirus (COVID-19) are seriously flawed and Taiwan is facing the risk of another wave of COVID-19 infections, as the island's authority previously only focused on preventing cases from the Chinese mainland but not those from the rest of the world, multiple experts from the island said on Wednesday.

The experts' statements came after US-based media outlet Foreign Policy published an argument article on Monday titled "Fear of China Made Taiwan a Coronavirus Success Story," which claimed the island had brought things under control using "a combination of early vigilance, proactive measures, and information sharing with the public, as well as applying technology in the form of analyzing big data and online platforms."

It is "in stark contrast to [the Chinese mainland]'s use of draconian and coercive measures and censorship to handle the coronavirus outbreak," the article claimed.

However, 23 new cases were confirmed in Taiwan on Wednesday, with the total number now exceeding 100, local media reported. Taiwan had not seen a surge in confirmed cases like this since the first case was confirmed on January 21.

Pan Huai-tsung, a health expert in Taiwan, told the Global Times on Wednesday that Taiwan's initial prevention efforts were indeed effective, but that was because there were luckily not so many cases that the island's capability to diagnose them were exceeded, and people in Taiwan had relatively good awareness of self-protection and quarantine.

Echoing Pan, Cheng Po-yu, executive officer of a cross-Straits youth communication association, said, "It was not because the Tsai Ing-wen administration took some special measures that contained the virus, it was because people have a strong awareness, since we all experienced SARS many years ago."

The Tsai Ing-wen administration is only taking credit for people's own awareness of the risks, Cheng said.

Taiwan's prevention efforts started in early February, as the island took measures to limit people who lived in the Chinese mainland or had been there in the last 14 days from entering the island. It was only on Wednesday that the Taiwan authority warned people in Taiwan not to make non-essential trips to locations in the US, Canada, Australia and New Zealand, and people entering Taiwan from these regions should be quarantined for 14 days.

Wang Bing-chung, a political commentator in Taiwan, told the Global Times on Wednesday that there were very few visitors from the mainland even before the outbreak, as self-guided travel had been suspended long ago. The real risk Taiwan is facing now is that it was only focusing on the mainland for prevention, but not the rest of the world.

"The epidemic has already become serious around the world, and the US is criticized for delaying its epidemic control because it would not conduct tests… But Taiwan only announced further measures today, meaning it has already missed the best opportunity. So today's surge of more than 20 cases mostly came from other countries," Wang said on Wednesday.

The Wall Street Journal said in a report on Wednesday that Taiwan may face a second wave of COVID-19 infections, a prediction Pan agrees with.

Taiwan is not taking concentrated quarantine measures on people who are coming to the island from other countries and regions like the Chinese mainland is doing, Pan said, noting that they are only undergoing home quarantine.

"This is worrying," Pan said, stressing that COVID-19 is a cunning virus that can spread without showing symptoms.

The mainland's epidemic control efforts are a miracle, Pan said, noting that he hopes the mainland will help Taiwan if the island falls into a situation where the epidemic goes out of control.