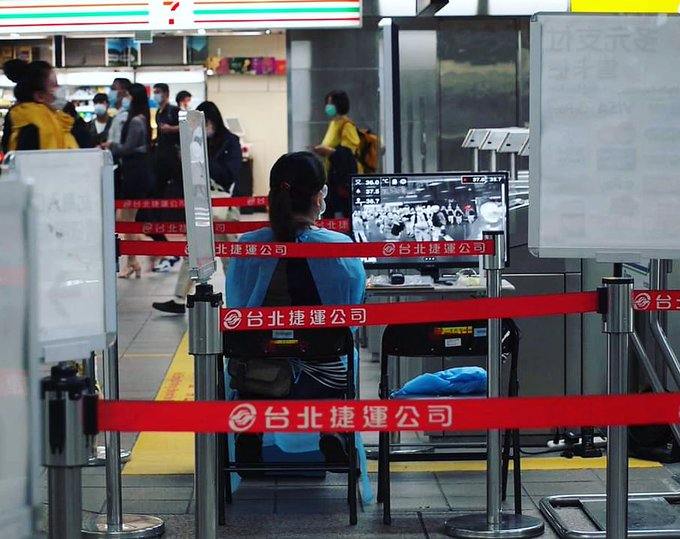 TAIPEI, April 1 (Xinhua) -- Many Taipei residents have added a new entry in their must-do list on weekends. They would quietly line up in front of the pharmacy in their neighborhood to buy their weekly ration of face masks.

Since early February, face masks have disappeared from the shelves of all convenience stores and beauty retailers like Watsons across the island and only been sold at registered pharmacies at designated hours every day. With each ID card, an adult can buy three a week.

"The nearest pharmacy to my home starts to sell face masks at 3 p.m. every day. I can not come at this hour on weekdays due to work," said a young man surnamed Chen. Since March, working people like him have another option, to buy face masks through the online gateway launched by the island's health department.

People in Taiwan have managed to keep their lives as normal as possible since the total number of novel coronavirus disease (COVID-19) patients on the island stood at a relatively moderate 322 as of Tuesday, compared with some other regions in the world. They can still go to the office and school, go shopping and dine out while cinemas and exhibitions are still open.

However, more subtle changes are running deep in people's life.

Taxi driver Yu Chiao-hua has seen his business drop by two-thirds since the Spring Festival that fell in late January. "There have been fewer and fewer customers, particularly since March," he said. "Local people are afraid of going out, and international travelers are barred now."

Subways are much less crowded than usual in prime hours, with masked passengers standing away from each other and seldom talking.

Religious activities, which would have been at a prime season after the Spring Festival, have mostly been suspended. The Dajia Matsu Pilgrimage, the largest annual religious procession in Taiwan, has been postponed since late February.

Restaurants are among those bearing the first brunt of the economic loss caused by the COVID-19. A shopkeeper, surnamed Lee, of a small diner in Taipei, told Xinhua that the number of customers reduced by at least half, and they had to cut the staff's working hours to keep the ends meet.

Taiwan's monetary authority has downgraded its forecast for the island's GDP growth for 2020 to 1.92 percent from the previous forecast of 2.57 percent.

The Yuanta-Polaris Research Institute, one of Taiwan's leading economic think tanks, made a similar estimation in late March, lowering its forecast for the island's GDP growth for 2020 to 1.5 percent from 2.2 percent.

The pandemic has discouraged consumers from going out and spending, and lockdowns imposed by other countries and regions have interrupted exports and imports of the island, said Liang Kuo-yuan, president of the think tank, at a press conference.

Enterprises may also be more cautious about their investments because of uncertainty created by the pandemic, he added.

The island indeed is facing intensifying uncertainty since the daily growth of COVID-19 patients suddenly picked up in mid-March, once reaching 27 on March 20, after a mild increase since the first confirmed case on Jan. 21.

When the epidemic in Europe and North America escalated, the island's authorities have been slow to restrict travel in and out of Taiwan, leading to a sharp increase of imported patients.

According to the authorities, about 60,000 people who took overseas trips have been quarantined at home.

Although the number of local infection cases accounted for about 14 percent of the total COVID-19 cases, the infection sources of about 20 percent of them were not identified. One of the locally infected patients had seen the doctor six times for a month before taking the COVID-19 test.

The island's authorities have asked public events that are attended by at least 100 people indoors or at least 500 outdoors to be suspended from March 25 to avoid contagion.

"I am not that hopeful about my business," Yu said. "It may not take very long to end the pandemic, but it will take a longer time for the whole economy to warm up and even longer for my business to recover."