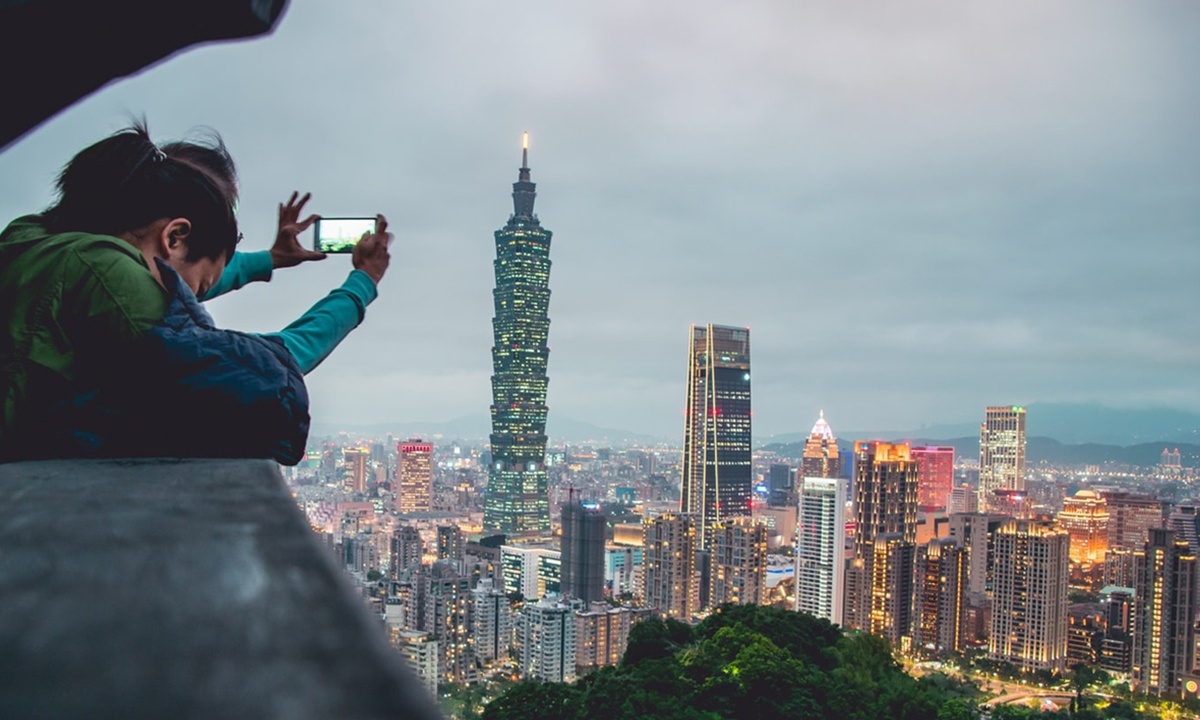 After gambling on Donald Trump in the US presidential election, the island of Taiwan and its Democratic Progressive Party (DPP), whose members have been openly rooting for Trump and bashing Joe Biden on social media, found themselves in an embarrassing situation to congratulate the reported president-elect and became anxious as it may not have the same "support" from the US as in the past four years, analysts said.

Chinese mainland observers noted that the DPP mistakenly placed its hopes on the US to push forward its secessionist agenda, ignoring the fact that the mainland has the initiative in when and how to solve the Taiwan question regardless of who governs the US.

Taiwan's Mainland Affairs Council on Monday said that although China-US competition will continue, the intense confrontation will cool down after the US election. The Chinese mainland will accelerate reunification, including using economic tools to speed up the process, it said.

Taiwan regional leader and DPP chairwoman Tsai Ing-wen on Sunday retweeted Biden's January tweet congratulating her re-election, which was interpreted by observers as "pretending to be buddy-buddy" with Biden after pro-DPP media openly rooted for Trump and attacked Biden in recent months.  Many members of the DPP even cheered for the Trump campaign and criticized Biden on Facebook during the election.

There is also speculation about whether Tsai will make a phone call to Biden as she did four years ago with Donald Trump.

A poll in Taiwan by the Asia-Pacific Elite Interchange Association showed that over half of the interviewees believed the relations between the island and the US will remain unchanged, while one in four believed that they will worsen under a Biden administration. Over half of the respondents believed the cross-Straits relationship will not change.

The DPP, leaning toward Trump, has to accept reality, and it will seize every opportunity to seek as much support as possible from the future US administration and maintain existing interactions with the US, Xin Qiang, deputy director of the Center for American Studies at Fudan University in Shanghai, told the Global Times on Monday.

In the Trump administration, the DPP had a high profile in the US with frequent arms sales and exchanges of senior officials.

Xin believes that Biden is more likely to re-balance relationships with the mainland and Taiwan as Biden hopes to resume cooperation with China on epidemic control, economic recovery, social and financial stability, global climate change and educational exchanges.

Amid Biden's reported victory, media outlets on the island of Taiwan are hyping claims that the US military is again sending troops to the island.

The naval force on the island of Taiwan confirmed that a team of the US Marine Corps arrived in the island on Monday, Taiwan news website United Daily News reported on the same day.

Under the "invitation" of the Taiwan military, the US marines will instruct troops on the island in combat capabilities in assault boats and boat infiltration in the next four weeks, the report said, noting that this is the first time the island of Taiwan has restored military interactions with a foreign country since the COVID-19 outbreak seven to eight months ago, and the US military is expected to gradually restore other training sessions across Taiwan.

The US military's presence in Taiwan used to be an open secret, and neither side actively gave publicity to related developments. But this time, Taiwan announced it in a high-profile way because the DPP wanted to give the impression that it has the US support, no matter who wins the US election, Xu Guangyu, a senior adviser to the China Arms Control and Disarmament Association, told the Global Times on Monday.

The US military's training of the island's troops will not change the cross-Straits military balance, as the island's military is limited and would collapse at the first blow, Xu said.

Analysts believed the US military's move was a continuation of the Trump administration's Taiwan policy.

No matter who becomes the next US president, it is always the Chinese mainland that holds the initiative in the Taiwan question, Xu said, noting that every US president has to consider China's reactions in US interactions with the island of Taiwan.

In a move that Chinese mainland military observers said is another deterrence to the Taiwan secessionists and preparation for a possible reunification-by-force operation, the Chinese People's Liberation Army (PLA) recently held a series of helicopter cross-sea assault exercises, featuring a coordinated attack with drones and helicopters for the first time.

During the exercises, the 71st Group Army sent out fly drones for reconnaissance, as attack helicopters began sea-skimming defense penetration. Under the laser guidance of the drones, the helicopters launched missiles from afar and accurately hit the targets, China Central Television (CCTV) reported on Sunday.

This new tactic could shorten the time needed to spot targets, give pilots higher survivability, and increase helicopters' attack range when equipped with missiles that have ranges longer than the choppers' own radar detection range, military observers said.

The CCTV report also showed that the helicopters landed on a civilian ship with a large flight deck, as the ship acted as a helicopter carrier. The ship can act as a relay, replenishment and repair platform to further increase the helicopters' combat capability in missions around large islands or reefs, Beijing-based naval expert Li Jie told the Global Times.