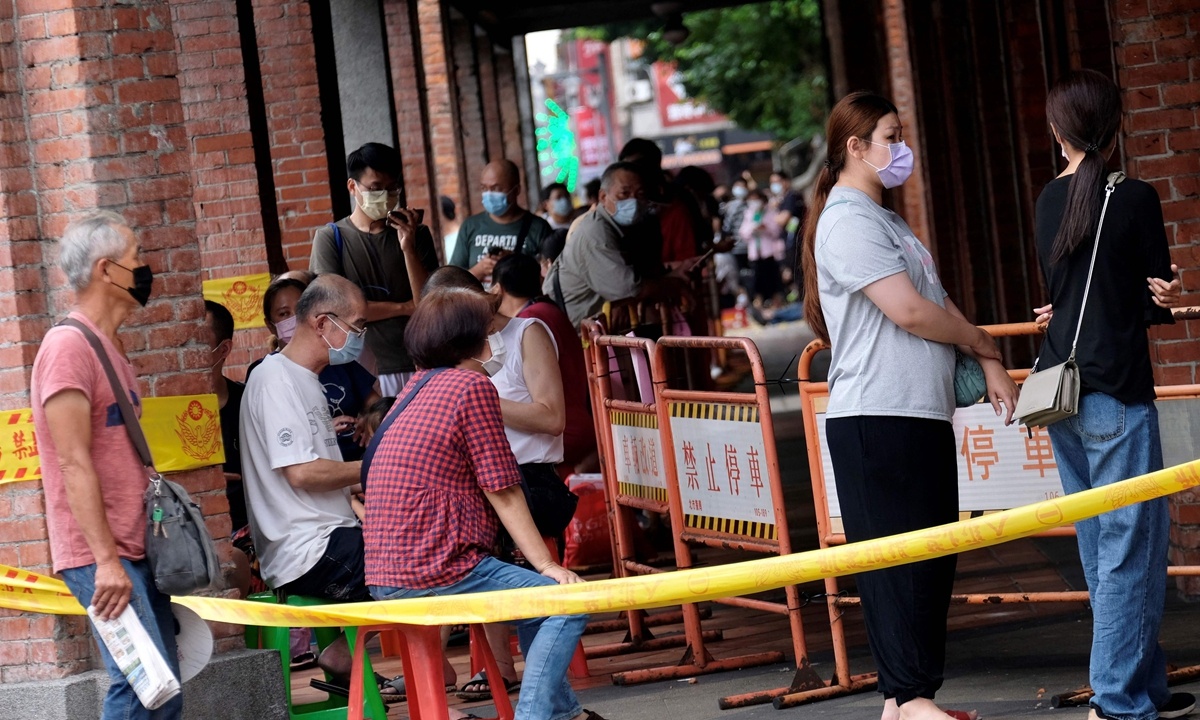 Residents on the island of Taiwan line up and wait for getting a COVID-19 nucleic acid test in Taipei. Testing on the island is 21 times more expensive than the mainland, hindering epidemic control of the island, which reported 240 new infections Tuesday after a record of 333 cases the previous day. (Photo: VCG)

More and more Taiwan residents, including political figures are losing faith in the poor epidemic handling and the incompetent governance of the secessionist Democratic Progressive Party (DPP) authority, which has also set ideological barrier to block cross-Straits cooperation as the COVID-19 epidemic has worsened in Taiwan, so they came to the Chinese mainland to seek solutions such as getting vaccinated or purchasing Chinese mainland-made vaccines.

Since the infections surged in the island in May, the Chinese mainland has expressed the willingness and kindness to island of Taiwan to offer assistance and support despite cross-Straits tensions, but the offers have been met with hostility and rejection from the DPP authority.

Facing growing number of infections and deaths, the DPP authorities have pinned hopes on COVID-19 vaccines. The US, who crows about "support" for Taiwan but in fact is using the COVID-19 issue to provoke the mainland and incite Taiwan secessionism, has showed no interest in offering meaningful help.

Under such a political environment, seeking a solution from the mainland without permission from the DPP authority is becoming a choice for many Taiwan people and political figures, with experts on both sides of the straits saying that it is a good start to let more Taiwan people see "who is the one that really cares about their health and treat them as compatriots, who is using them for political purposes, and what would happen if they put their destinies in the hands of foreign forces and Taiwan secessionists."

The DPP authority will make it difficult for pro-reunification forces and normal residents to form stronger ties with the mainland when the DPP has failed to control the epidemic, which is disappointing, but as long as mainland support and kindness toward Taiwan compatriots are successfully delivered, all efforts made by the people on the two sides of the straits are worthy, said a Beijing-based expert who asked for anonymity.

"It's a good chance for those brainwashed people in Taiwan with strong bias and hostility against the mainland, and hold wishful thinking about the US, to learn the truth. The DPP's approval ratings are declining, but to what extent the people in the island could correct the poisoned political atmosphere against the mainland depends on the effectiveness of these efforts and how many facts could be told honestly to the public in the island," he said. 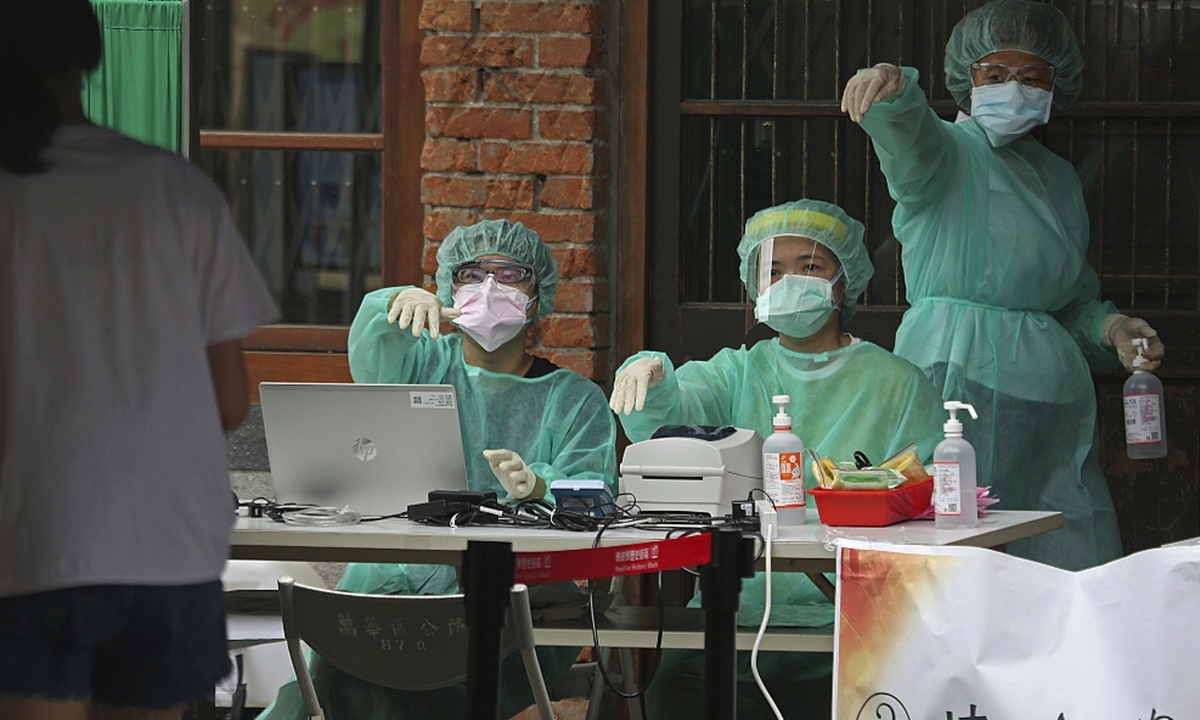 Come to the mainland!

"Coming to the mainland to get vaccinated against COVID-19" has become a major consideration for many Taiwan residents given the grave epidemic situation and shortage of vaccines there, said Yok Mu-ming, former president of the pro-unification New Party of Taiwan.

Yok told the Global Times in an exclusive interview on Sunday that he was impressed by the strict quarantine and anti-epidemic measures in the mainland while staying at a hotel in quarantine after coming to Shanghai to take the jab.

Mainland cities including Beijing, Shanghai and Shenzhen in South China's Guangdong Province have started to administer vaccine doses to Taiwan compatriots living in the mainland for free, and those to whom Global Times spoke said that there have been no adverse effects, and that they went through the exact same process as local residents in the mainland.

Yok earlier announced through a video that he was about to depart from the island to Shanghai to get vaccinated. Starting from April 19, the municipal government in Shanghai included local Taiwan compatriots aged 18 to 75 who live in Shanghai into the scope of those eligible for the Chinese-made vaccine jabs. The former president of the New Party of Taiwan told the Global Times that when the Taiwan residents most need help from the mainland, the Democratic Progressive Party (DPP) authorities are still focused on ideological battles, using the epidemic to serve its political goals and seek "secession."

"I would rather go through the quarantine process to get vaccinated in the mainland, and I don't waste time anymore," he said, noting that he came to the mainland with his wife, and they underwent quarantine in different rooms.

When he arrived in Shanghai, he also experienced strict but reassuring arrival anti-epidemic tests, Yok noted. "Before departure, I took the nucleic acid test, which was negative. When I arrived, I took the tests again with both nasal and throat samples," he said.

"I think they did the tests more carefully here in the mainland," Yok said, noting that the swab tests were also taken deeper as he felt he was about to vomit.

It was a long and rigorous procedure from the airport to the hotel where he is undergoing quarantine, but everything was done in an orderly way. For example, professional staff in protective suits guided him to the room, and staff accompanied him during the whole process, he told the Global Times.

Yok also urged Taiwan residents who are able to come to the mainland to get vaccinated here, as he knows many of them are very interested in this plan.

The island reported 493 new cases of COVID-19 on Saturday, including 486 domestic infections and seven imported ones, in addition to 21 deaths, according to local media reports. The DPP authority has been widely criticized by experts for rejecting mainland vaccines and ignoring officials' calls to purchase those via local retailers, as the island faces a vaccine shortage.

Cheng Po-yu, executive director of the cross-Straits Youth Exchange Association who recently was vaccinated in Beijing, told the Global Times there were no adverse effects, Taiwan residents are treated the same as others and the process is very fast.

"The information for Taiwan residents vaccinated in Beijing is accessed on the e-health certificate on smartphone, which can be updated simultaneously," he suggested. 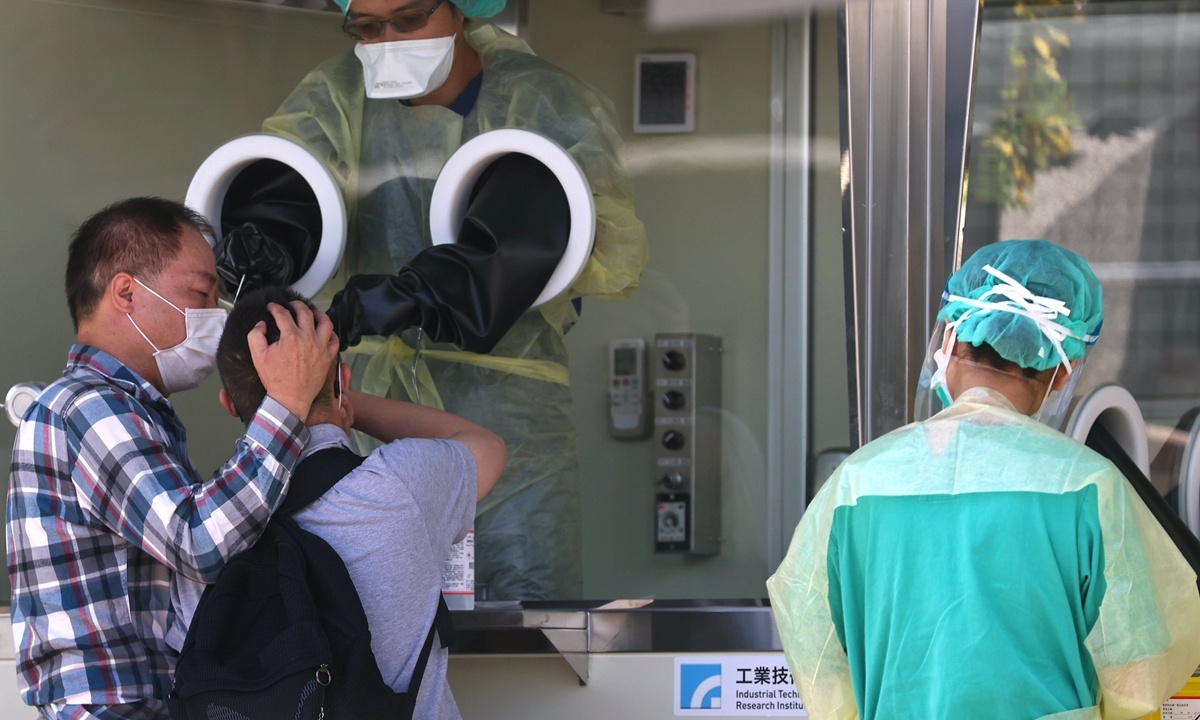 Residents of the island of Taiwan take rapid test for COVID-19. (Photo: IC)

Given strict quarantine regulations of both the mainland and the island, coming to the mainland to get vaccinated is not an ideal option for many Taiwan residents as it takes at least a month to stay in the location for quarantine, so Chang Ya-chung, a member of Taiwan's major opposition party KMT and Sun Yat-sen School President in Taiwan island, is trying to accept vaccine donations from the mainland and effectively bring them to the island of Taiwan.

Chang said his school is trying to negotiate the entry of the first batch of vaccine donations of 5 million doses of BNT COVID-19 vaccine from Shanghai's Fosun Pharma and 5 million vaccines from mainland Chinese developer Sinopharm, coming from a Beijing-based culture company.

Chang said on Saturday that he and his school will handle related matters on behalf of the company.

Chang told the Global Times on Sunday that the more severe Taiwan's epidemic is, the weaker the stance of the DPP authority would be if it insists on rejecting mainland vaccines. "When the public voice to accept the mainland's help becomes loud enough, the political barriers separating Taiwan people and mainland support will collapse."

Some Taiwan-based experts said the reason the DPP authority is keeping the door closed to mainland vaccines, even after being snubbed by the US, is that it tries to hang on until July or August, when a locally made vaccine is expected to become available.

The Taiwan-made vaccine will only be in Phase-II clinical trials at that time and will not be certified internationally. But when the time comes, people on the island will have no choice but to be inoculated with it. Manufacturers will make a fortune, and the DPP has huge interests and connections with drug companies.

Chang told the Global Times that he will submit the application for the vaccine-entry permission to the relevant authorities in the island on Monday, and said that even if the DPP authority rejects the mainland vaccines, "people in Taiwan have already felt the warmness and kindness from the mainland."

The mainland vaccines, which have been administered by many countries worldwide, were stigmatized in Taiwan. Now the mainland's vaccines can be rationally discussed and have a positive image in the island, "which is a good thing for cross-Straits relations eventually," Chang said.

"So all I am doing is to get the DPP authority to give the green light for the vaccine donations from mainland, no matter how many doses come in," Chang said, "Even if in the end we only get 100,000 doses from that 5 million, it's will still be a victory for us."

Long-time stigmatization against the mainland and the mainland vaccines has resulted in low trust among Taiwan people on mainland-produced vaccines. So some other forces are still trying to get vaccines made by Western countries even if it takes huge amounts of money.

According to local Taiwan media, Terry Gou, founder of Taiwan manufacturing giant Hon Hai Precision Industry Co., said on his Facebook account Saturday that he is looking to source 5 million doses of COVID-19 vaccines for Taiwan, via his charity foundation.

Gou said his YongLin Charity and Education Foundation plans to procure vaccines manufactured by Germany-based BioNTech SE and is not considering purchasing any brands made in the Chinese mainland.

Previously, the DPP authority tried to purchase the BioNTech vaccines directly from Germany, but Shanghai-based pharmaceutical giant Fosun Pharma has an exclusive contract for BioNTech vaccines in China, which also covers the regions of Taiwan, Hong Kong and Macau. An attempt by the DPP authority to buy vaccines failed because it violated business contract, and once again the DPP complained that "the mainland is blocking Taiwan from purchasing vaccines from other countries."

Some observers said if the DPP really wants to buy the vaccine, they can just call Fosun Pharma, but they did not, instead trying to break the rules and use the issue to incite hostility and hype negative narratives against the mainland.

A source close to Fosun Pharma told the Global Times that the Taiwan organizations are not able to obtain the vaccine directly from Germany-based producer BioNTech because Fosun has the exclusive rights to sell the BioNTech's mRNA vaccine to the greater China region, including Taiwan. That means it is impossible for Taiwan to bypass Fosun to get the vaccine made by BioNTech which would be a breach of the agreement.

Vaccines could be shipped directly to Taiwan from Germany if a deal between Taiwan's merchants and Fosun is concluded.