CHINA Taiwan to import problematic pork from US amid public dissent

Taiwan to import problematic pork from US amid public dissent

The legislative body on the island of Taiwan, dominated by the secessionist Democratic Progressive Party (DPP), on Thursday approved nine acts related to the importation of ractopamine-enhanced pork from the US, amid strong dissent from more than 70 percent of the island's residents and a brawl from opposition parties. 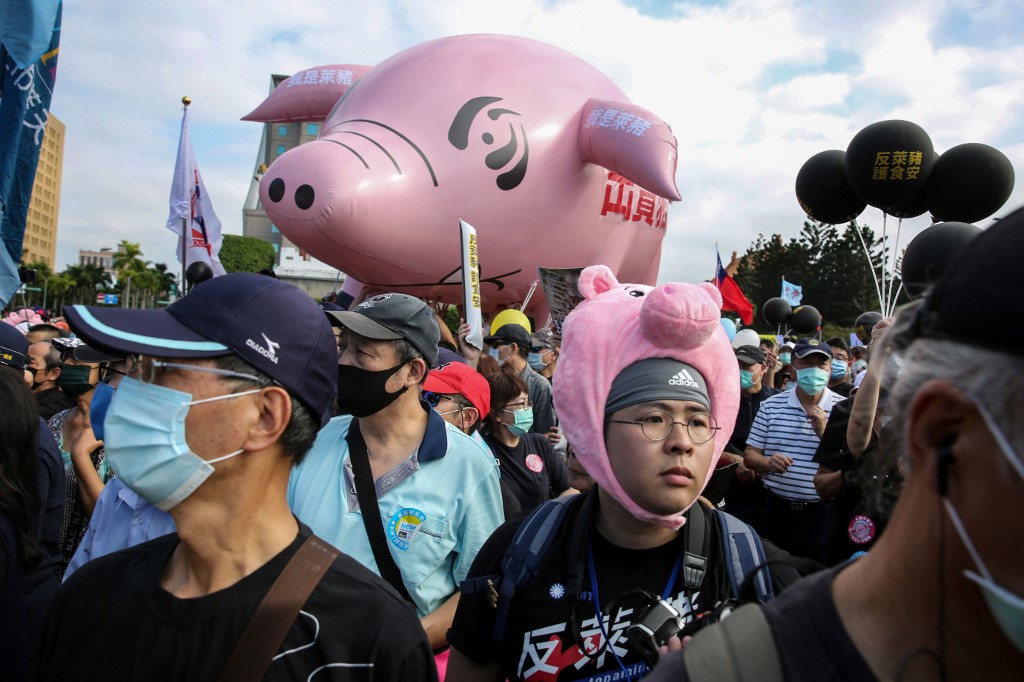 People attend the annual pro-labor march 'Autumn Struggle' to protest against the lifting of restrictions on US pork containing ractopamine feed additive, in Taipei on November 22, 2020. (File photo: AFP)

Observers from the Chinese mainland and Taiwan believe that what the pro-secessionist DDP is obtaining from the US is nothing but an illusory promise and short-term psychological comfort at the expense of the health of the island's 20 million people.

The result does not come as a surprise to Taiwan residents and local politicians as the DPP, which occupies 62 of the total 113 seats, has ordered all its members to press the "yes" button when it comes to executive orders related to the importation of problematic pigs from the US, media reported.

The island of Taiwan is expected to lift restrictions on problematic US pork from January 2021. Relevant policies have caused great waves of social disputes on food safety, local pig industries and Taiwan's "international dilemma," since the DPP authorities first announced their decision in late August.

Thousands of people on the island marched in Taipei in November, demanding the withdrawal of the decision to import problematic pork. A doctor on the island of Taiwan, was warned by local police in December after saying the ractopamine-enhanced pork is harmful to people's health, media reported.

In a recent poll launched by Taiwan-based media ETtoday, over 75 percent of Taiwan residents are concerned about their safety on consuming problematic US meat; 58.6 percent of the interviewees expressed that they feel it is unacceptable to further deepen economic ties with the US by allowing the importation of ractopamine-enhanced pork.

Chiu Yi, a former "lawmaker" in Taiwan and a Taiwan-based pro-reunification scholar, told the Global Times that pushing imports of problematic US pork despite local dissent showed the diehard Taiwan secessionist leader Tsai Ing-wen's desperation as she has no other choice but to deeply rely on the US to confront the Chinese mainland.

An online material dispatched by the DPP reads "almost all CPTPP members are open to ractopamine-enhanced pork from the US," a Taipei resident who preferred not to be name told the Global Times.

"Taiwan is being isolated from the rest of the world and free trade is hard to negotiate," reads the leaflet, persuading Taiwan residents to make a sacrifice.

Under the dominance and authoritarian rule of the DPP, especially when it controls most of the island's media, Taiwan's society is generally forgetful - everything will return to normal after residents protested, and the people are resigned to it once the executive order related to the import of the problematic pork takes effect, said Chiu, noting that 2021 is not an election year, and the DPP has no electoral pressure, so it can ignore public opinion.

"Opposition parties in Taiwan are not powerful and resolute enough, so it will not be long before people get used to life consuming problematic pork."

Wang Jianmin, a Taiwan affairs expert at the Chinese Academy of Social Sciences told the Global Times that importing US pork is the DPP's "trump card" to strengthen ties with the US.

The Biden administration will be taking its seat in the White House in about a month's time, replacing Trump's cronies who made the deal with Taiwan on problematic pork. Analysts say that Biden will not snub favors from Taiwan but he is also unlikely to meet the DPP's expectations, such as signing an FTA or even joining the CPTPP, which also depend on the will of the mainland.

The Biden administration's arm sale strategy may follow Obama, less drastic than the Trump administration, as Biden faces an array of domestic problems and potentially easing tensions with the mainland, Chiu said.

The mainland still needs to safeguard against the risk of a breakthrough in economic and trade cooperation between the US and the island of Taiwan, and firmly warn and exert pressure on the DPP and the US when necessary, said Wang.

Huang Chih-hsien, an expert on cross-Straits relations and a TV commentator from Taiwan, said that the mainland should be on alert that the US would pressure it in trade talks through ractopamine-enhanced pork, given that Japan, South Korea and the island of Taiwan agreed to open imports, while the mainland still says no.

"Taiwan residents may have to wait until reunification before they stop consuming ractopamine-enhanced pork," Huang said.