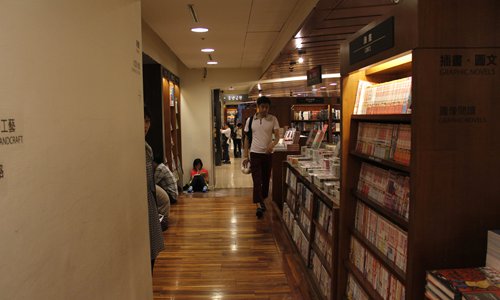 People read books at a bookstore in Taipei. (Photo: VCG)

Booksellers and publishers on the island of Taiwan are calling for a revision of a 2003 regulation on introducing publications from the Chinese mainland, after Taiwan regulators shocked the industry by requiring censorship of such books, an unprecedented move since Taiwan abolished the Publication Act.

Earlier this month, Taiwan's cultural regulators sent a notice to publishers and associations, asking them to submit an application for publishing books from the mainland, Taiwan-based news site udn.com reported.

Publishing such books without the approval of Taiwan's "Ministry of Culture" will lead to "administrative penalties," said the report.

"The demand for review was never raised before. It's a huge reversal of freedom of the press," Taiwan bookseller Shen Rongyu told the Global Times on Wednesday.

Since 2005, Shen's store has sold over 8 million books from the mainland, and the bookseller expected higher sales because of the booming publishing industry across the Straits.

However, over 2,000 books the store ordered from Shanghai and Hangzhou are now stranded en route to Taiwan as they need to be "reviewed," said Shen.

When Shen filed the application for "review" earlier this week, officials in Taiwan told him "they have no time due to staff shortage."

Applying for review of books introduced from the mainland is not an easy job, as booksellers have to submit documents including contract and proxy notes, said Shen.

What's more confusing is that the new rule has come at a time Taiwan's publishing industry is struggling with bookstores being shut down, while business on the mainland is booming as the government steps up efforts to popularize the reading habit, said a business director surnamed Zhang at the Taiwan-based Dragon Totem Cultural Limited.

Exchange of books could help people across the Straits, especially the young generation, to get closer to one another, Zhang told the Global Times.

The company has introduced 700 books from the mainland since it was set up seven years ago. The books are published in traditional Chinese characters in Taiwan, said Zhang.

The censorship decision was made according to articles of a regulation on mainland publications in 2003, though such a requirement has never been evoked before, Taiwan media said.

The notice also triggered wide discussion about amending the articles, as Taiwan publishers expressed strong concerns over a trend of scrutinizing publications in the future.

According to the regulation, newspapers, magazines, films, and television and radio broadcasts from the mainland also need approval before being introduced in Taiwan.

The regulation also bans publications that promote Communism, an article regarded "unconstitutional" as it goes against a judicial interpretation made in 2008, renowned Taiwanese publisher Chen Ying-ching was quoted as saying by udn.com.

The response of Taiwan's publishing industry makes it all the more necessary to revise the regulation and to avoid such moves in the future, said Zhang.

Lu Ching-cheng, president of the Association of Taipei Publishers, said that several industry associations are discussing changes that need to be brought about in the regulation, World Journal, a US-based Chinese-language newspaper, reported.

Instead of being considerate toward the needs of the people, the Democratic Progressive Party (DPP) is going the other way and continues to set barriers to impede normal exchange across the Straits, An Fengshan, spokesperson for the Taiwan Affairs Office of the State Council, said at a press conference Wednesday.

What DPP is actually restricting is bigger and better opportunities for Taiwan compatriots, said An.

The notice intends to alienate the mainland as "pro-independence" forces in Taiwan are scared of larger exchange across the Straits, Lü Cuncheng, a research fellow at the Institute of Taiwan Studies of the Chinese Academy of Social Sciences, told Global Times.

A closer interaction between people on both sides is unavoidable as the mainland is becoming increasingly alluring for Taiwan locals and more preferential policies will be introduced to facilitate their work and life on the mainland, Lü said.

According to An, the mainland will continue to promote the implementation of the 31 preferential policies for Taiwan. Introduced in 2013, the policies cover legal rights, education, culture, and tourism, and are aimed at improving the lives of all Taiwan people.