Hotan is a place of such delicateness that it is described in Uygur literature and folk songs in the feminine – always as a goddess of unparalleled charisma, yet at the same time a woman with terrestrial beauty. It is a conglomeration of continuity and co-existence, a hybrid city of hybrid buildings and hybrid people who defy narrow religious, ethnic or cultural categorisations.

The best way to bring the city to life and to show how its magnificent cultural fusion and breathtaking development are the results of the co-existence of tradition and innovation is through the lives of the men and women, artists and merchants, imams and scholars, as well as families who made Hotan. By becoming immersed in their stories, we will embark on a journey to unveil the mystery of the finest jewel in Xinjiang's crown. 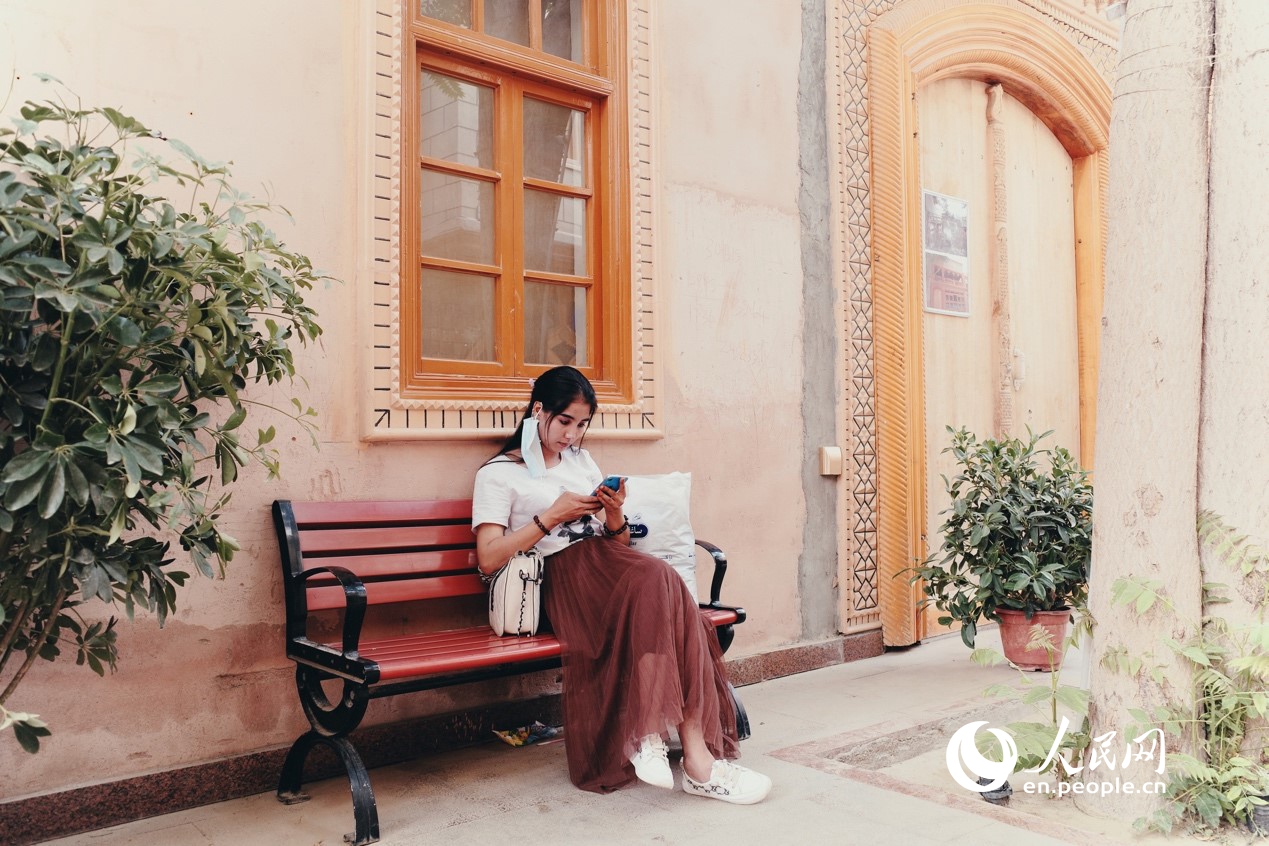 Sipping herbal tea on the porch outside his 200-year-old ancestral house, 68-year-old Memtimin Ghopur has seen it all. Born into a medical family, the knowledge of treating patients with traditional Uygur medicine has been passed down through eight generations in his family, while on the first floor of his ancestral house, all kinds of Uygur medicines are still displayed on counters.

Memtimin lives in Tuancheng, a once run-down residential community, which is now the most renowned pedestrian street in Hotan. His shabby one-floor residence was renovated by the government in 2016, and turned into a three-floor Uygur-style mansion. He and his wife, along with three children, live on the second and third floors of their new home, while the first floor now serves as a small clinic where he receives patients and sells traditional Uygur medicine.

"I'm proud of my new home. Each house in Tuancheng has its unique beauty, because it is designed by the family who lives in it. Mine has a small windmill on the roof, as well as beautiful dove decorations, because I really like doves," said Memtimin.

According to Memtimin, the renovation of history-rich Tuancheng has injected vitality into the once untraversed Uygur neighbourhood. His ancestral house has now become a famous attraction on the pedestrian street, attracting countless visitors and patients. He has developed a new hobby – making friends with the visitors, especially those who can bring stories and news of the outside world to him.

As a practitioner of traditional Uygur medicine for his whole life, Memtimin admitted that more and more patients now turn to modern medicine and advanced technologies, but he believes that traditional treatment still has its significance, as it is a carrier of Uygur culture, as well as his family's history.

"As long as there are patients who need my help, I will help them with all my efforts. My son has now become a Uygur medical professional, and he will continue to promote our traditional treatment," said Memtimin.

Several blocks away from Memtimin's ancestral house, 42-year-old Tunsahan Abdugheni is busy haggling with her clients in her shop. Colourful and smooth, Etles silk is a type of ikat that Uygur people use traditionally for their clothes and is a speciality of Hotan.

Punctilious and humble, Tunsahan's face displays a sharp blend of the mildness of an ordinary Uygur housewife and the sophistication of a persistent businesswoman forged by decades of commercial endeavour.

"I love beautiful things, and I love to see happy clients in our silk clothes. It is nice to see that our tradition is welcomed by so many people, not only the Uygurs," said Tunsahan.

Like Memtimin, Tunsahan is a life-long resident of Tuancheng. In 2018, Tunsahan, her mother and three brothers, as well as their families moved into their renovated home, making up a total of 13 people. Tunsahan opened her own Etles silk shop on the first floor, making a monthly income of over 4,000 yuan.

"Though my income is not that promising, I still feel happy and have confidence in my future. Going upstairs, I enjoy a happy family life, going downstairs, my career waits for me in my shop. What life can be better than this?" said Tunsahan.

Tunsahan noted that tradition and Uygur culture are well-preserved in their neighbourhood and daily life. Even now, she and her neighbours still keep the old tradition of inviting each other over for dinner to enjoy some delicious food and fun gossip.

"Residents of Tuancheng and Uygur tradition are like threads on my silk embroidery. They are so interwoven it is now impossible to separate them," said Tunsahan. 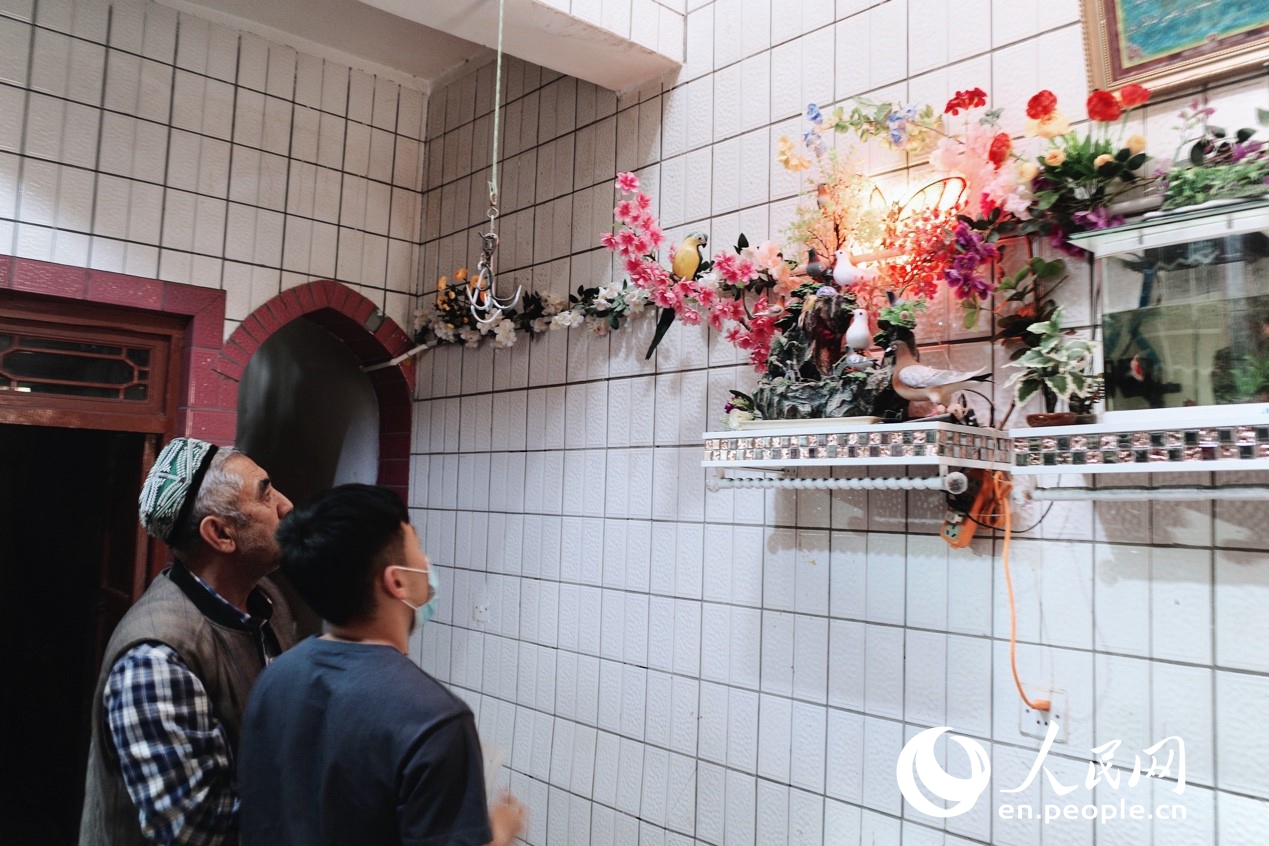 Doves are the symbol of Hotan. Dove decorations can be found everywhere in Memtimin's house. (Photo: People's Daily Online)

Religion: balance between celestial and terrestrial

Under the dazzling Hotan sun, the green dome of Ujmilik Mosque swirled and reverberated with the murmurs of prayers. In a small room concealed behind a wooden altar, Abdurusul Shemshidin, who just finished his shift as a taxi driver, quietly changes his clothes to prepare to host a religious ritual. Serving as the mosque's Imam for over four years, he can now switch easily between his celestial and terrestrial identities.

Born into a Muslim family, 50-year-old Abdurusul is an expert in Islam. Ujmilik Mosque has over 150 frequent visitors, who voted for him to become their Imam. Religious figures in Hotan, like Abdurusul, often have several loyalties to different identities, the human equivalent of Hotan's layers of dust and stone. Some of them are farmers, some construction workers, and others are merchants. For Abdurusul, his terrestrial occupation is a taxi driver.

"Our religion teaches us that living in the moment is very important. Only a happy and affluent person can provide help to others, and that's what I have been doing – to live a better life while following my religion," said Abdurusul.

"Believing in goodness has made me a better person, while living a better life has helped me believe in goodness," he noted.

Abdurusul's biggest pride is his son, who is now studying law in Xinjiang Science and Information Vocational College. He believes that as a modern Muslim, it is important to learn about sciences, law and society, as well as balancing celestial and terrestrial life.

"Religion is only a part of my life. I have many other priorities in my life, such as family and work. It is not hard to find a balance between my religious duties and daily life, as they are closely connected," he added.

78-year-old Kadir Yusup has been praying in the Ujmilik Mosque for over two decades. His apartment is three kilometres from the mosque. Every day after sending his grandson to school, he likes to take a bus to visit the mosque so that he can spend some quality time with other Muslim friends.

"The mosque has changed significantly over the past 20 years. Everything is new. This is the nearest mosque to my apartment, and it has become my daily routine to come here and talk with my friends," said Kadir.

"Muslims and non-Muslims should not discriminate against each other and should live in harmony, while people of different backgrounds should help each other. This is what a good life looks like to me," said Kadir. 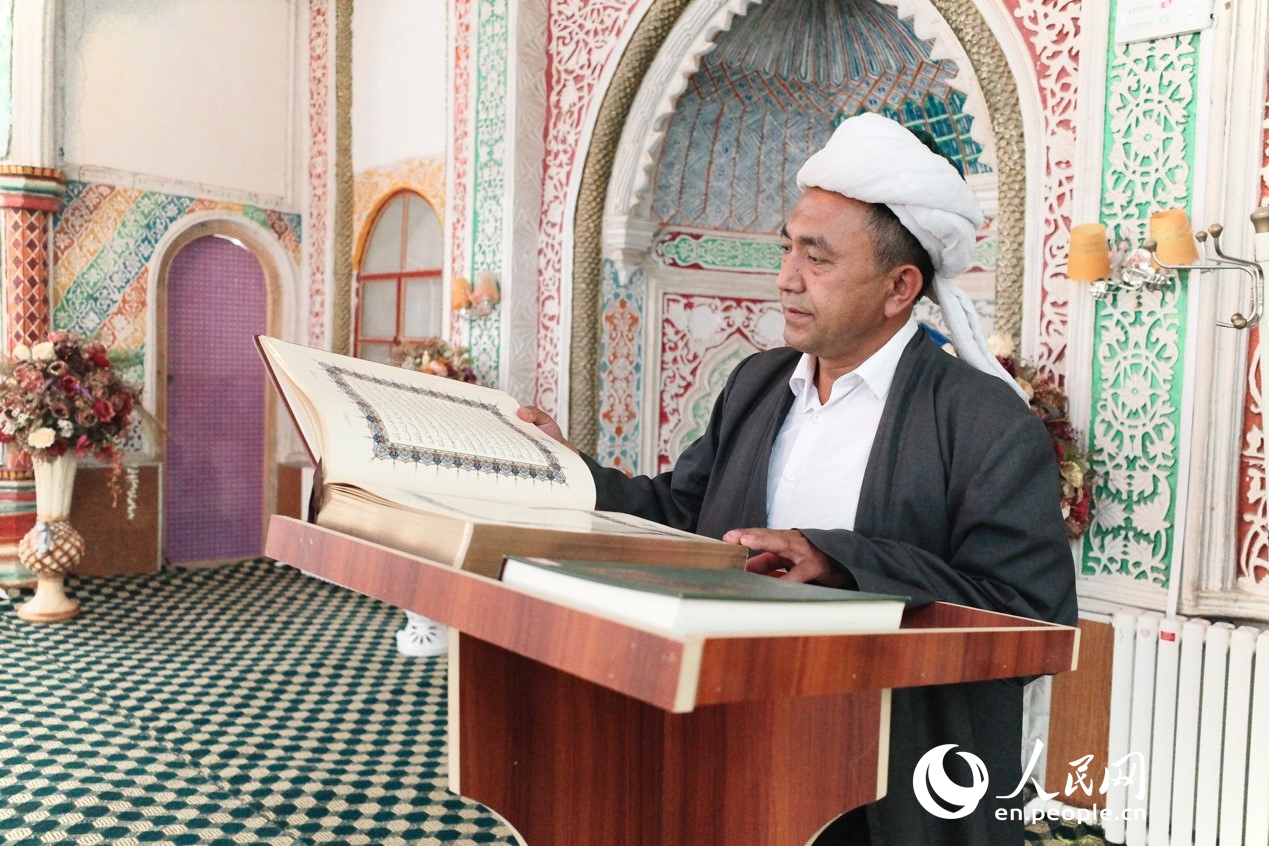 Innovation: power of the Internet

Once a substitute teacher, 29-year-old Dilnur Iskender is now a local Internet celebrity. Along with her two partners, she has been selling traditional Uygur wood carved tableware online for over half a year, creating an online frenzy for traditional Uygur artwares.

"The reason why I wanted to become a social media influencer is because of a wooden spoon I have been using since I was a kid. Such spoons are made by traditional Uygur wood carving techniques, but in 2017, when my old spoon broke, I found it impossible to get a new one, because no one was making those things anymore," said Dilnur.

After quitting her job in 2020, Dilnur came to Hotan in search of the last Uygur wood carving masters. It took her several months to find 10 craftsmen who knew these traditional techniques, and even the youngest of them was over 40 years old.

"All of them had stopped making wood carvings when I found them, because they could not make money from it, while the young generation is reluctant to learn these traditional techniques," said Dilnur.

"Technological advances have threatened the existence of our traditional culture and art, but we can also use Internet to revive them. With this in mind, I decided to livestream and sell those traditional tablewares online," said Dilnur.

After sharing her emotional stories of her childhood memories online, Dilnur began to attract widespread attention. Clients across China were touched by her stories and the interesting cultural meaning behind the wooden tablewares. They began ordering all kinds of Uygur wood carving artwares from her, and even fans from other nations such as Russia and Kazakhstan have contacted her, hoping to get a Uygur spoon for themselves.

"Every day, I can sell around 20,000 yuan of wooden tablewares. I have signed contracts with all the carving masters, and now they are happy to continue their work. I feel really happy about that," said Dilnur.

Like Dilnur, 30-year-old Ershat Ibrahim is also a social media influencer. His online shop features Hotan's agricultural products, and he is also a content maker who make videos of local markets, agricultural festivals and local art.

Every week, Ershat invites his two partners, a pair of outstanding Uygur dancers, to livestream Uygur dance to the audience, helping them to get a better understanding of Uygur culture.

"The internet has provided young people like me a big platform to show our talents, and also introduced Uygur culture to the public. It's interesting to see the dynamic integration between old and new, tradition and innovation," he said. 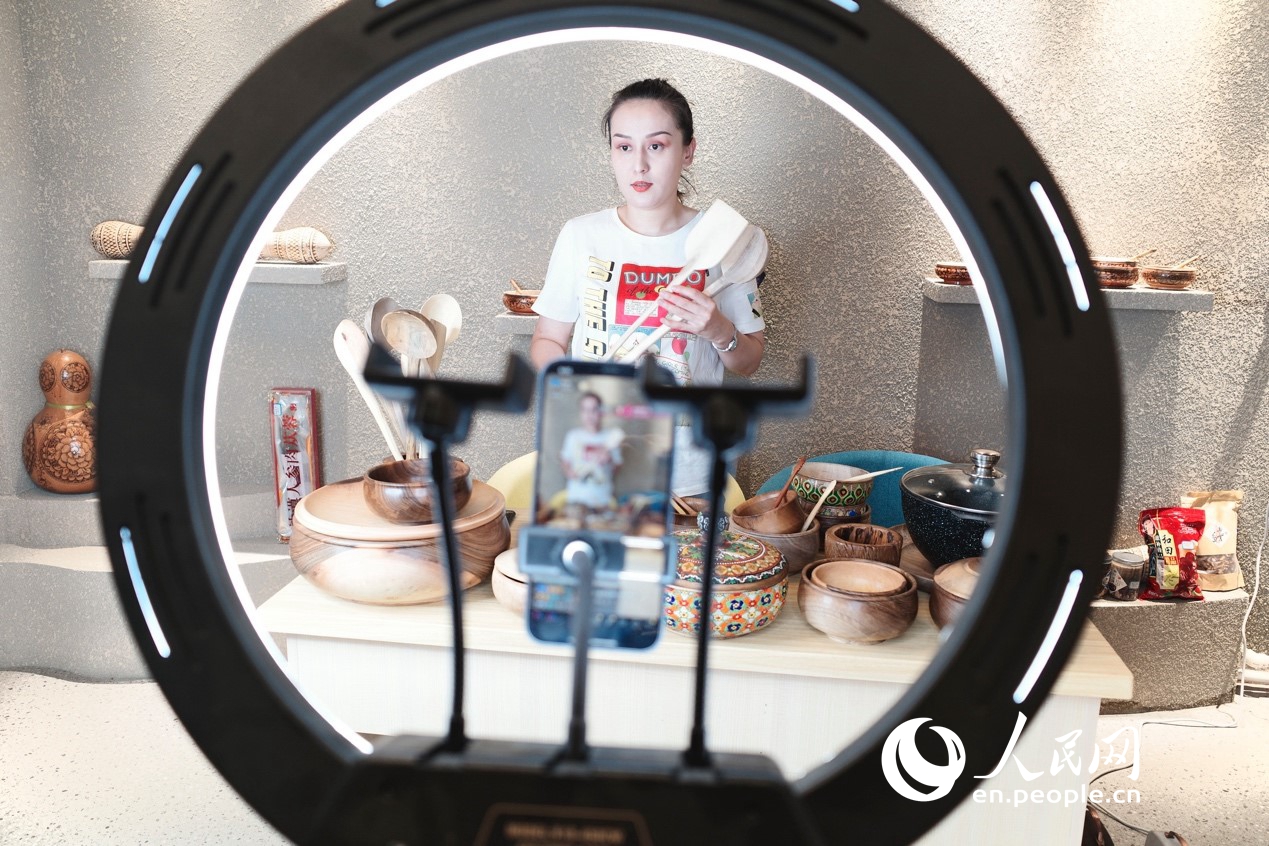