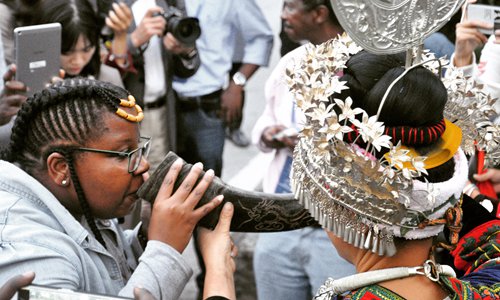 A group of journalists from 14 African countries who are participating in a media workshop organized by Belt and Road News Network (BRNN) visited poverty alleviation projects in Southwest China's Guizhou Province from Saturday to Tuesday.
Guizhou, home to multiple ethnic groups, has been plagued by poverty for a long time. The task of alleviating poverty to ensure that traditional ethnic culture is preserved has become increasingly pressing.
"Development in ethnic regions is an important link in the province's goal of achieving synchronous prosperity, which deserves special efforts," Xu Fei, an official with the Ethnic and Religious Affairs Commission of Guizhou Province, was quoted as saying in a government statement on the Guizhou provincial government website.
Guizhou has taken the lead in China in releasing a series of provincial-level regulations aimed at supporting ethnic groups. These include regulations on implementing ethnic regional autonomy law, promoting ethnic solidarity and progress and regulations on ethnic township protection and development. These regulations guarantee financial support to ethnic regions, the statement said.
"These preferential policies that target the difficulties and problems in the development of ethnic groups provide specific support policies to all autonomous prefectures, counties and towns, establishing a complete policy framework for poverty alleviation work in ethnic regions," Xu said, according to Guizhou provincial government website.
Xu said that the next move will be to investigate how to make differentiated poverty alleviation policies in ethnic regions aimed at incentivizing and reinforcing their self-development abilities.

'Weaving gold'
"Zhijin" means weaving gold in Chinese. Zhijin county, administered by the city of Bijie, has more than 20 ethnic groups, among which the Miao number the most.  Weaving and dying cloth has long been a traditional industry among the women of the Miao.
Under the support of government and an e-commerce platform, Cai Qun established a batik museum in Zhijin in 2009 and funded a cooperative in November 2017, which aims to pass on and develop traditional weaving, dyeing and embroidery skills.
Cai told the Global Times that her cooperative has provided jobs for more than 1,200 women in the county and created revenue of more than 10 million yuan ($1.43 million) from selling scarfs to foreign markets in 2018. Most were exported to the US and European countries, which allows each woman a steady monthly income ranging from 3,000 to 4,000 yuan.
In the batik museum, dresses, purses and jeans with fashionable designs are on display. Cai told the Global Times that even former US president Barack Obama's stylist has used her fabric.
After watching the weaving skill of Cai's mother, Diana Forson, a senior editor from the Ghana Broadcasting Corporation praised the local government's efforts to protect cultural heritage while developing the local economy.
Forson told the Global Times that she hopes China will insist on the correct path of preserving traditional culture, since it is the traditions of a country that informs who you are.

Capitalizing on local strengths
Dafang county is an hour's drive from Zhijin, which has 24 ethnic groups, with the Yi ethnic group accounting for half the county's population, according to the county's publicity authority.
Responding to the government's requirement to tailor projects based on local conditions, Evergrande Group, one of China's largest real estate enterprises based in Shenzhen, South China's Guangdong Province, donated 11 billion yuan to help Bijie shake off poverty.
Based on cultural heritage skills such as lacquerware making, Evergrande helped build a culture street in Dafang to attract tourists. In one area where a group of Mongolian people live, the enterprise established a cattle breeding base, from which local residents can buy calves with an interest-free bank loan under the guarantee of Evergrande, and obtain cattle breeding skills from the company, to achieve self-support, according to Wen Chuanguo, an employee of Evergrande's poverty alleviation group in Bijie.
Sifiso Mahlangu, head of politics at South Africa's Independent Media, told the Global Times that he has seen tribes and ethnic minorities in some African countries falling into conflicts and war, and he appreciates the peace and common development among the ethnic groups in Guizhou.
"We should respect each other's culture and language and we need to be a country that embraces the beauty of diversity in art, dress code, music and dance," Mahlangu said.
Song Guiwu, an economics professor at the Party school of Northwest China's Gansu Province, who has researched poverty alleviation projects in Guizhou, told the Global Times that the harmonious relationship and development among the different ethnic groups can be attributed to the preferential policies made by the Communist Party of China, which emphasize reinforcing investment and support to ethnic minority regions.
"There are abundant resources in Guizhou, and the efforts the central and local government have made in poverty alleviation these past years are helping promote development in minority areas [of Guizhou]," Song said.
Guizhou's achievements are a testament to the hard work of local officials and people, Song said.
He suggested that ethnic culture and tradition should be prioritized and developed into industries, and that government and enterprises should balance ethnic culture, protection of traditions and development.
"A long-term and stable poverty alleviation mechanism should be established to prevent any relapse into poverty," Song noted.