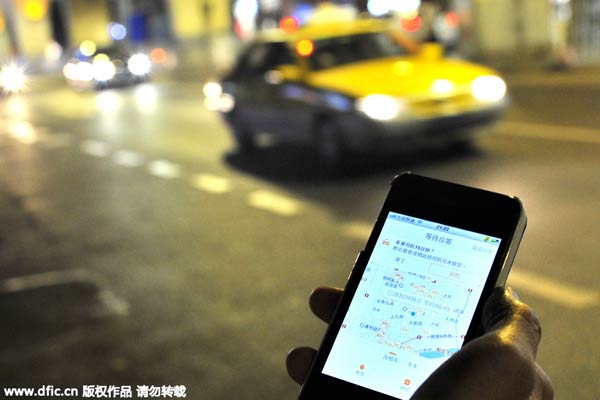 A man uses taxi-hailing app on his smartphone on a road in Guangzhou city, South China's Guangdong province, April 9, 2015. [Photo/IC]

Guangzhou taxis will likely install visual surveillance and sound recording devices soon, according to the requirement of a draft regulation on taxi service that aims to better manage the sector.

According to the draft posted on Tuesday at the city's transport department website to solicit public opinions before May 31, the vehicle terminal installed in every taxi should include functions such as visual surveillance and sound recording, as well as electronic payment and satellite positioning.

The new rule was aimed at improving the management of taxi services and protecting passengers' rights, according to the draft regulation.

So far most cities, such as Beijing and Shanghai, do not have a requirement for taxis to install visual surveillance and sound recording devices. Car-hailing services do not have such equipment, either.

Didi Chuxing, a major car-hailing company, is also seeking opinions from customers to see if they can accept cars with visual surveillance and sound recording devices, after a 21-year-old flight attendant was killed by a Didi driver on May 6 in Henan province.

The result is yet to be announced. But media reports showed that some passengers are worried that the recordings could be leaked, too, and threaten their privacy and safety.

The Guangzhou legislative affairs office, which issued the draft, declined China Daily's request for interviews on its purpose behind installing the surveillance and recording equipment.