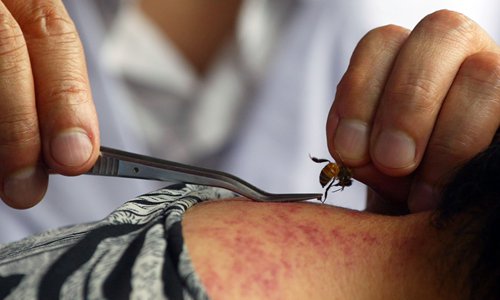 A doctor treats a patient with a bee sting. (Photo: VCG)

The method is known as apitherapy, which uses honey bee products like bee venom to treat many illnesses and alleviate pain. Apitherapy is a branch in TCM with a long history.

The TCM doctor She Ruitao uses tweezers to hold honeybees on a patient's skin, forcing it to sting the patient, according to a Yishou Video.

"It hurts," one patient shrieks. "It reduces swelling and alleviates pain," another patient said.

She is an apitherapist in a hospital in Shenzhen of Guangdong Province. "I'm frequently bitten by bees, I just wash with soap to reduce swelling," said She, adding that he pays the bees respect by burying them in a flower garden.