The Chinese government has acknowledged the important role TCM has played in treating COVID-19 patients and has added treatment of the virus to the specifications of three traditional medicines, a top TCM expert said on Wednesday. 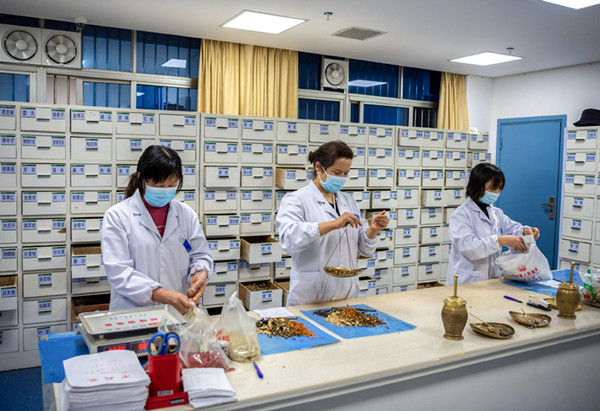 Adding the treatment of COVID-19 to the specifications of the three medicines means they can be widely used across the country to treat patients, Zhang said.

One of the three medicines, Lianhua Qingwen capsule, has won approval to enter the Thai market, and French researchers plan to conduct clinical research into using it to treat patients, he said.

"After more than two months of clinical research, we have chosen the three medicines out of hundreds of TCM medicines that are effective in treating cold and flu," he said.

"By introducing the medicines abroad, we hope that they can save more people as the pandemic continues to worsen globally," he said.

Li Yu, director of the Department of Science and Technology at the National Administration of Traditional Chinese Medicine, said Jinhua Qinggan Granule, developed during the 2009 H1N1 influenza pandemic, is effective in treating mild and moderate COVID-19 patients. Lianhua Qingwen capsule is also effective in treating mild and moderate patients, especially in improving symptoms like fever, cough and fatigue.

Xuebijing Injection is often used in treating severe and critically ill patients. It can increase the recovery rate and reduce the deterioration rate, Li said at a news conference on Tuesday.

Two TCM prescriptions－Lung Cleansing and Detoxifying Decoction, and Huashibaidu Formula－have been approved by the National Medical Products Administration for clinical trials, he said.

Wang Rongbing, director physician with Beijing Ditan Hospital, said the prescription has been used at 28 provincial regions in treating COVID-19 patients in all stages with various symptoms, yielding good outcomes.

None of the 1,265 confirmed cases in 66 designated hospitals in 10 provincial regions that have used the prescription has shown worsened symptoms. Ninety-eight percent of patients had been discharged by March 23, Wang said at a news conference in March.