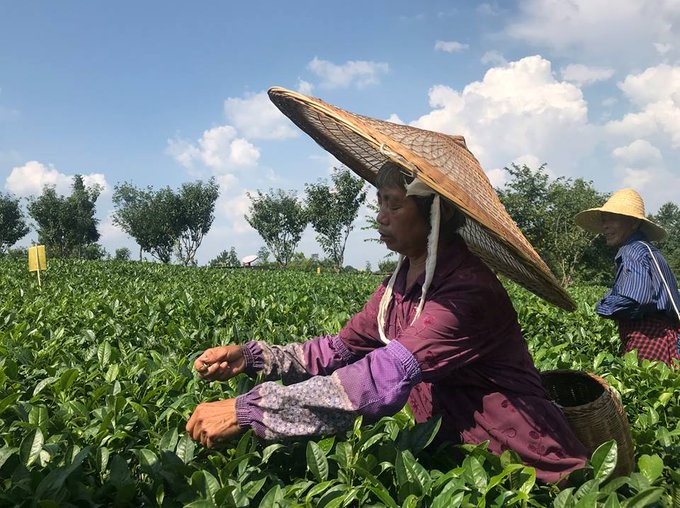 Barren mountains have turned green. Tea leaves that sold cheap have become a cash cow. They are changes happening in a township in Southwest China's Guizhou Province.

Wang Zhihuai, a tea farmer from Guizhou's Qianxinan Buyi and Miao Autonomous Prefecture is one of the witnesses of the changes. He said they now just do tea planting and picking, and do not worry about sales at all, and can each earn around 10,000 yuan ($1,410) from one seasonal harvest.

The booming tea industry has lifted the town out of poverty.

Pairing-up support from Ningbo, East China's Zhejiang Province, is a major contributor to the better lives in Changtian.

China has been promoting pairing and cooperation between eastern developed areas and less developed western regions on poverty alleviation.

Since 2018, Ningbo has sent skilled cadres and tea professionals to Changtian to train tea farmers, and invested 4 million yuan to build a tea market.

Since the tea market was put into use in February last year, more than 140,000 kilograms of dried tea has been sold in the market, with a revenue of nearly 50 million yuan, said Bai Song, deputy secretary of the Party committee of Changtian. It not only lifted more than 700 households out of poverty, but also helped over 3,000 tea farming households to increase their income.

The surrounding processing enterprises also ushered in business opportunities. "Thanks to the trading market, the company's output value exceeded 1.5 million yuan last year. Despite the impact of the epidemic, we are confident that the annual output value will at least double this year," Ruan Jianchao, head of a local tea company said.