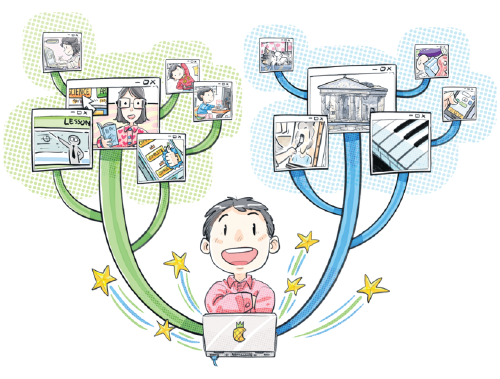 Early one morning as fog lingered in the deep mountains, a teacher sat beside a cluster of bare trees and used a laptop to give an online class to students more than 700 kilometers away.

Liao Xiaolan, who teaches science at a middle school in Hangzhou, capital of the eastern province of Zhejiang, was stranded in her home village by the novel coronavirus outbreak.

Her home county, in the Jinggang Mountains of the eastern province of Jiangxi, had been reported as having two infected patients, who were later transferred to Nanchang, the provincial capital, for treatment.

Guided by regulations related to virus prevention and control, Liao and her husband, who were visiting her parents' home to celebrate Chinese New Year, stayed in the village for an extended holiday.

On Feb 10, in common with many schools nationwide, Liao's school decided to resume classes via online services.

The decision presented a problem for Liao, as her home village is surrounded by mountains and has limited connection with the 4G network that supports online teaching.

She was unable to return to Hangzhou, and restrictions on access that came into force in the village on Feb 8 meant she could not even get to a nearby town to use a better internet connection.

To solve the problem, she made a signal amplifier from bamboo, wires and circuit boards. She was helped by her husband, who majored in engineering at college.

Two days before the first online class, the couple went out early in the morning to find a place with a stable internet signal. Late that day, they found a place in the woods just 1 km away from their home where their little amplifier would work.

When the big day came, the 40-year-old felt a rare sense of nervousness, despite years of face-to-face teaching experience.

In addition to her laptop and the signal amplifier, she had a table and a chair, and a model of a magnetic needle she had made from bamboo for her first online class.

Her students-some of the 50 million who have joined the cloud-classroom program supported by DingTalk, Alibaba's communication app-were presented with a very unusual virtual classroom.

Liu Xuan, one of the students, said, "When I saw the scene full of leafless trees and fallen leaves in the remote mountains, my respect for her (Liao) grew immediately."

In the week after the new semester started, she gave six online lessons in the village. She finally returned to Hangzhou on Feb 17.

Although internet speed is not an obstacle in the city, Liao was looking forward to meeting her students in person again.

She said online lessons are convenient under special conditions, but they lack direct interaction compared with real classes. That's because the students cannot raise their hands to ask questions, and it is difficult for the teachers to gauge whether they have absorbed the information provided.

"It is my duty to teach the children. Compared with the doctors and nurses who are risking their lives to save COVID-19 patients, I am not worth mentioning," Liao said.