CHINA Teachers to get lifetime ban for serious offenses

Teachers to get lifetime ban for serious offenses 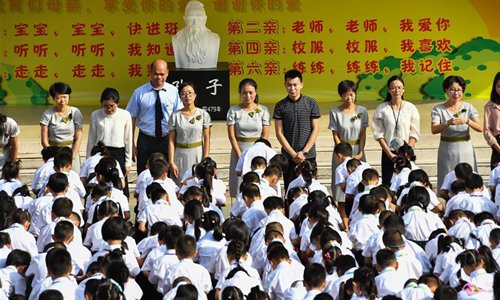 Students pay respects to teachers at a school in Guangzhou, south China's Guangdong Province, September 3, 2018. Schools all over the country prepare various activities for students to greet the new semester. (Photo: Xinhua)

Teachers caught committing serious violations against laws and regulations, such as sexually harassing students or taking bribery, will be banned from teaching for life, said an official of the Ministry of Education (MOE) on Monday.

Ren Youqun, an MOE official, made the remarks at a press conference after a notice on teachers' ethics was jointly released by seven national departments, including the MOE and the National Development and Reform Commission.

The notice came out amid sexual scandals involving college teachers at Peking University and the Shanghai University of Finance and Economics, which triggered a flood of criticism on Chinese social media.

Teachers will be punished according to regulations and disciplines after verified violations such as sexual harassment of students, academic misconduct and receiving gifts from students and their parents, according to the notice.

Their teaching qualifications would be revoked, the notice said, urging schools and authorities to establish a platform to expose teachers' ethical and disciplinary violations as a warning and deterrent, and create a database of teachers' violation record.

A lifetime teaching ban is the minimum punishment for teachers involved in sexual or inappropriate behavior towards students, said Zhou Hongyu, a professor at East China Normal University and vice chairman of the Chinese Society of Education, noting that teachers should also receive legal punishment if their behavior violates the law.

The Peking University on December 11 revoked the qualification of a male professor named Feng Renjie for improper sexual relations with numerous female students.

On December 9, the Shanghai University of Finance and Economics also announced the dismissal of a male associate professor named Qian Fengsheng who had sexually assaulted a female student. Local police are investigating into the case.